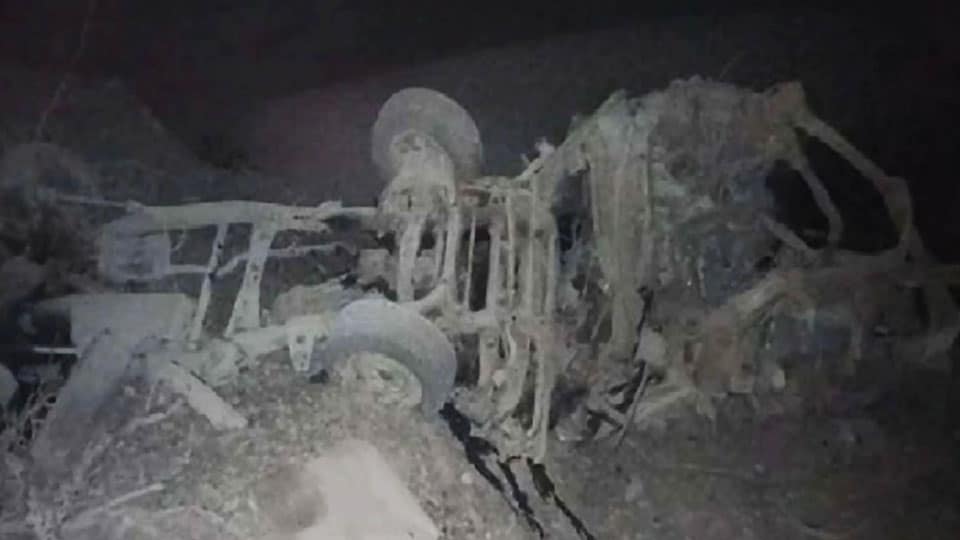 Shivamogga: At least eight people were killed in a major blast that shook Shivamogga town last night. The blast was heard across Chief Minister B.S. Yediyurappa’s home district at around 10.15 pm. The explosion was reported at a Railway Quarry site in Shivamogga District where a vehicle was carrying explosives.

As per reports, the massive explosion took place near a gravel and boulder crushing facility at a stone mining quarry. The possibility of subsequent explosions at the quarry at Hunasondi near village Abbalagere has not been ruled out since some dynamite sticks are still live, the Police were quoted as saying by news agencies. A bomb disposal squad has been rushed to the spot of the incident and the entire area has  been sealed off.

While eyewitnesses say they felt tremors at the same time as the explosion, geologists had ruled out recording tremors in any of their observatories. So strong was the blast that window panes shattered while many houses and even roads developed cracks, said an eyewitness.

Sources in Shivamogga district administration confirmed that the high-intensity blast was from dynamite sticks being brought in a truck to a quarrying site on Shivamogga city’s outskirts.

Sources at Hunasondi village where the powerful blast occurred said more than 50 dynamite and gelatine sticks were being carried in the truck.

The sound of the blast was heard in neighbouring Davanagere, Chikkamagalur and Uttara Kannada Districts. The vehicle carrying the explosives was badly mangled and the bodies of the victims were dismembered beyond recognition.

Prime Minister Narendra Modi has expressed pain at the loss of lives in the explosion and said the Karnataka Government is providing all possible assistance to the affected.

Yediyurappa wrote on Twitter: “I extend condolences to deceased members. Injured people are being treated. I’ve ordered high-level inquiry on this and strict action will be taken.” He said he had been in contact with senior officials since last night and dispatched teams to carry out rescue operations.

Two people have been detained so far. The arrested included a contractor of a stone crushing facility where the blast occurred when a truckload of gelatine sticks went off, Police added. Meanwhile, the authorities have not ruled out the possibility of the death toll increasing. “There are rumours that at least 10 to 15 people have died. Let the Police complete their investigation,” Shivamogga Deputy Commissioner K.B. Shivakumar told reporters today.