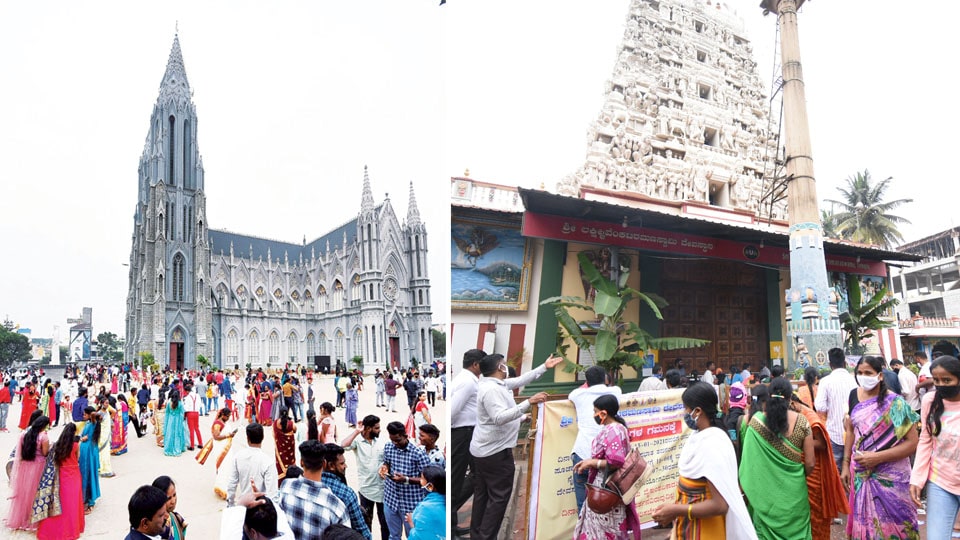 Mysore/Mysuru: Christmas was not cancelled but it was significantly curtailed in city this year due to COVID contagion and the State Government’s flip-flop on night curfew, timings, restrictions and scale of celebrations.

Likewise, Vaikunta Ekadashi too was celebrated in a low-key manner at most of the Vaishnavite Temples in city this morning. Though Temples were decorated for the festival, the crowd was limited in the morning. However, the footfalls picked up as the day progressed.

Representatives from Temple managements and Trusts were seen appealing to people not to crowd in a particular area. Extra care was taken to ensure sanitising and help pilgrims maintain social distancing.

Sri Lakshmivenkataramanaswamy Temple at Vontikoppal remained closed for devotees due to pandemic and people were seen performing pujas and lighting camphor outside the closed doors.

Hundreds of Christians flo-cked the churches in city to attend the midnight Mass yesterday heralding Christmas celebrations. The centre of attraction was the St. Philomena’s Church in Lashkar Mohalla where people arrived to witness the celebrations. Church members and the choir sang Christmas carols and hymns.

The illuminated Churches, people visiting them and Christmas holidays spread some cheer amidst the pandemic. People came out of their homes wearing masks and carrying handy sanitiser dispensers in a hope that at least their prayers would herald a disease-free New Year.

As most of the devotees could not attend the midnight Mass, many devotees lined up in front of churches as early as 5 am today. Prayers were held till 11 am.

Special puja arrangements were made at Sri Ganapathi Sachchidananda Ashram. The Venkataramanaswamy Temple inside the Ashram premises was decked up for the occasion. In the puja rituals that were held early in the morning Sri Swamiji took part.

A Vaikunta Dwara (Swargada Baagilu) or ‘Heavenly Gate’ to the Lord’s inner Sanctum was opened at North of the temple and devotees passed through the Dwara. The Dwara is opened on this auspicious day, which falls during the Dhanur / Margashira month in the Hindu calendar (corresponding to late December-early January in English calendar).

Due to the festival, there was extra rush in Sri Chamundeshwari Temple atop the Chamundi Hill. Devotees also thronged the ISKCON Temple at Jayanagar for darshan and Vaikunta Dwara Puja. Devotees wore masks and sanitisers were made available at almost every corner.