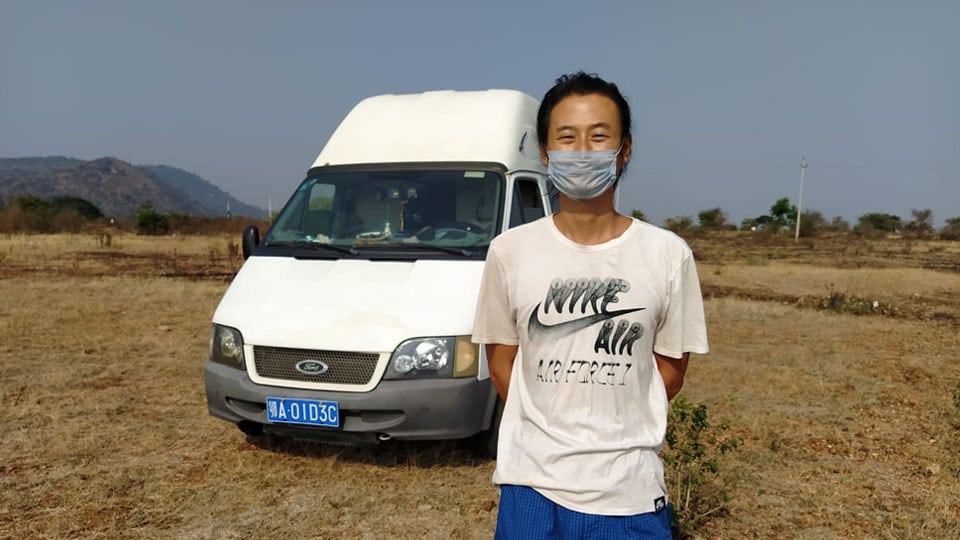 Mysuru/Mysore: A Chinese man and his girlfriend from India, who have been camping in a Caravan vehicle along with a pet dog near Lalitha Mahal Palace Ground, for the past eight days, have caught the attention of the residents of Giridarshini Layout located close to the spot, because the man is from China, the epicentre of COVID-19.

Batrick, a Chinese national in his early thirties, who came to India in his Caravan vehicle with valid documents a year ago, befriended a woman by name Bijiya, when he toured Manipur about six months back.

Batrick, who is in Karnataka for the last three months, was touring different parts of Karnataka, when the State became Coronavirus hit with the death of a man at Kalaburagi.

Batrick who arrived in his Caravan vehicle along with his girlfriend Bijiya and a pet dog, chose a spot near Lalitha Mahal Palace Ground, as he considered it a safe place. His Caravan vehicle is designed to have all the facilities available at a home, such as a kitchen, toilet and a resting enclosure.

Although the public cared little in the first few days, their suspicion and anxiety grew when Batrick did not leave the spot. They informed the jurisdictional Nazarbad Police about a Chinese man camping in his Caravan vehicle.

The Police, after visiting the spot, informed the Health authorities, who thoroughly  screened Batrick and his girl friend Bijiya for Coronavirus. The authorities heaved a sigh of relief, when medical reports tested negative for Coronavirus and that the two were hale and healthy.

The public too, who were initially hesitant to go near Batrick because of Coronavirus scare, later became friendly with him and started meeting him often.

Speaking to Star of Mysore, Bijiya said that they too were very scared in the beginning as they expected the local people to target them. But after the Health authorities declared them hale and healthy after carrying out a thorough screening, there was marked change in the mindset of locals, who later became friendly with them, she noted.

“We used to visit the city market daily for purchase of groceries. Batrick has come to India with all legal documents and as such there is no cause of worry for them. Mysuru is one of the safest places in the country and we are very much impressed by the city’s beauty and splendour,” she said.

When asked why they did not prefer to stay in a lodge, Bijiya said that  Batrick’s Caravan vehicle has all the facilities and comforts of a home and as such they found no need to look for a lodge or any other boarding facility.

Asserting that their stay posed no threat or problems to localites, she said that local people had become friendly and supportive and as such they are finding the place more safer.

When asked about the duration of their stay in Mysuru, she said that they will decide in a few days upon watching the situation then.