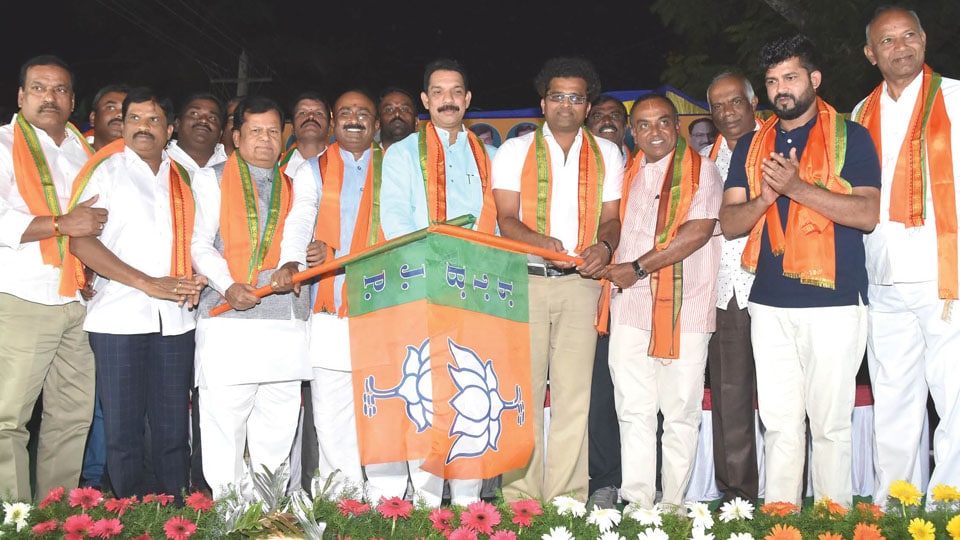 Mysore/Mysuru: T.S. Srivatsa took charge as the new City BJP President and S.D. Mahendra as the District President at the Party’s Office in Chamarajapuram here on Monday in the presence of State BJP President Nalin Kumar Kateel and a host of other BJP leaders.

Speaking on the occasion, Nalin Kumar Kateel said that the new Presidents  — Srivatsa and Mahendra — must devote their entire time to strengthen the party. Pointing out that the two have assumed Office at a time when the party is in power both in the State and the Centre, Kateel said that great leaders such as Shyama Prasad Mukherjee, Atal Bihari Vajpayee and L.K. Advani have built the party with utmost dedication and the new office-bearers must carry forward the legacy left behind by the leaders who have sacrificed much for building the party over the years.

Stating that he has come from an RSS background, Kateel said the winds of change have been blowing right from Kashmir to Kanyakumari and the party should tap the euphoria to full potential.

Highlighting the achievements of Prime Minister Narendra Modi, he said that abrogation of Article 370 and implementation of CAA, NRC and NPR were some of the bold decisions taken by the Modi Government. Claiming that the CAA was the brainchild of the previous UPA Government headed by the then Prime Minister Manmohan Singh, Kateel said there was no point in the Opposition parties protesting against it now.

Maintaining that he has toured 37 organisational districts of the Party since he took over as the State Chief last year, Kateel ridiculed the Congress for not naming KPCC President and other office-bearers even after months.

Flaying Siddharamaiah for celebrating Tipu Jayanti and registering false cases against Hindu activists when he was the Congress Chief Minister earlier, Kateel said that Yediyurappa left behind his disappointment after the party came so close to power in the 2018 assembly polls and engaged himself in party affairs. Kateel thanked outgoing city BJP President Dr. B.H. Manjunath and District President M. Shivanna for their work and services to the Party.

Kateel also came down heavily on former Chief Minister H.D. Kumaraswamy saying that the JD(S) leader did nothing significant  for the State when he was the Chief Minister for 14 months, heading the coalition Government.

K.R. MLA S.A. Ramdas,advised rest by doctors after undergoing a heart procedure recently, was not present at the event.