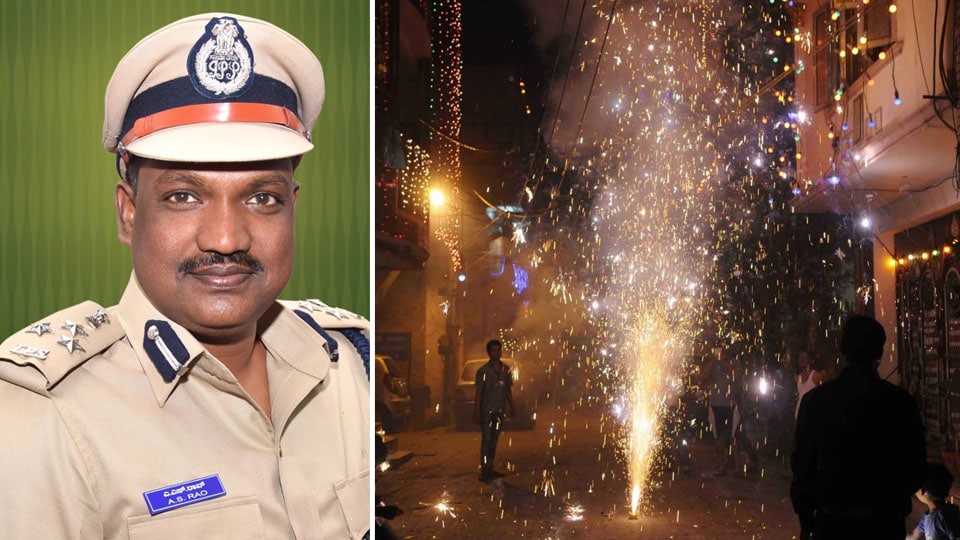 Mysuru: With Deepavali festival being celebrated from Nov. 6 to 8 (Naraka Chaturdashi, Dhanalakshmi Puja and Balipaadyami), people have been urged to follow Supreme Court guidelines for safe celebrations of festival.

As per the Supreme Court ruling, bursting of series crackers or laris, manufacturing them and using them is banned. Crackers should be sold only by authorised license holders and crackers should be burst only between 8 pm and 10 pm for four days.

City Police Commissioner Dr.A. Subramanyeswara Rao has issued the following general instructions to the public to follow rules, failing which, legal action would be initiated against offenders.

There is a ban on bursting crackers from 10 pm to 6 am and crackers should be burst only between 8 pm and 10 pm. Public are requested to purchase crackers only from authorised license holders and should read safety instructions printed on cracker box and follow them.

Crackers should be lit only through candles or long incense sticks. Water should be kept handy to extinguish fire in the first stage itself. Public should light rockets and other such items in open spaces and avoid lighting them in crowded places, under power lines or near tall buildings. Do not burst crackers by holding them in hand, the advisory stated.

Crackers should be burst under the supervision of elders and vessels or other such items should not be covered on crackers after lighting them. Close the doors and windows of houses to avoid rockets and crackers from getting inside.

Crackers should not be lit on roads but should be lit in open spaces. Do not experiment with crackers and do not attempt to manufacture crackers at home, the  advisory stated.