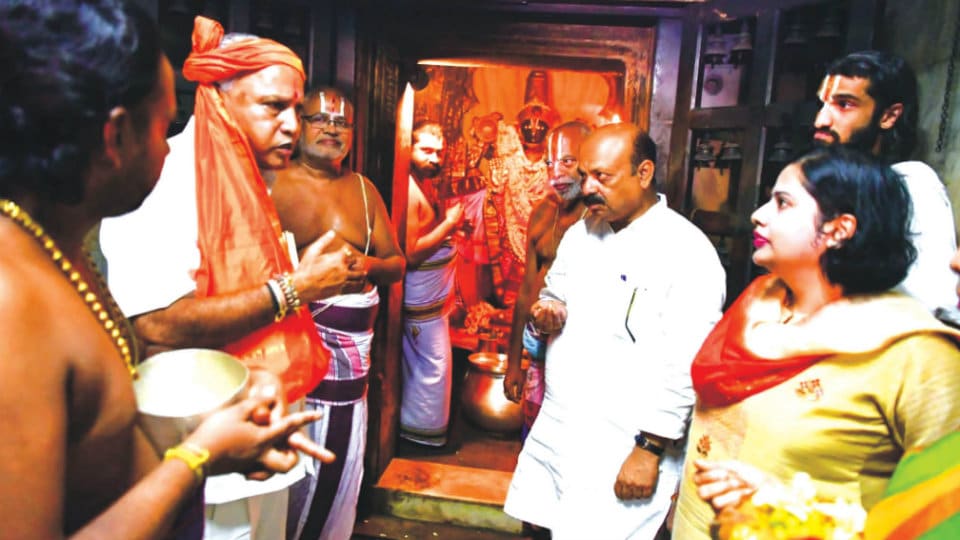 Mandya: Bookanakere in K.R. Pet taluk of Mandya district, the birth place of Chief Minister B.S. Yediyurappa, wore a festive look on Saturday as Yediyurappa arrived there a day after taking oath as the Chief Minister.

Yediyurappa was welcomed by his sister-in-law Sharadamma and family members with an Arathi. He had breakfast with them at his house nearby and spent about twenty minutes, speaking to relatives and friends.

Yediyurappa offered prayers at Adishakti Gogalamma Temple and also at Gavi Siddalingeshwara Temple at Kapanahalli. Both the temples were decorated with flowers and fruits.

Thousands of Yediyurappa’s supporters and BJP workers thronged the village to welcome him.

Bookanakere villagers, feeling happy that the stars had at last turned in favour of their leader, offered special prayers in his name praying that BSY pass the floor test on Monday and also a smooth tenure later on.

Speaking to press persons after offering prayers at the two temples, Yediyurappa said “I have come back as CM to serve the people. I will see that Bookanakere is developed”.

The CM also expressed confidence that he will pass the floor fest scheduled for Monday.

BSY was accompanied by his and Shivamogga MP B.Y. Raghavendra, MLA and former Minister Basavaraj Bommai and other party leaders.

Yediyurappa promised to sanction Rs. 2 crore for the construction of ‘Annadana Bhavan’ in Melukote.

Instructing the officials, the CM said that he will take all necessary measures to develop the region and he has convened a meeting of DCs and ZP CEOs in Bengaluru on Aug. 2, where the issue of Melukote development will be discussed.

As Yediyurappa visited his nature village, the aspirations of the people in K.R. Pet taluk are too high as the taluk is hit by a severe drought and the taluk lacking in water resources.

A delegation of farmers appealed the CM to release water to Hemavathi Canals and to expedite Hosaholalu Aqueduct which is lying in the lurch for nearly two decades.

Even as thousands of people thronged Bookanakere, pick-pocketers had a field day on Saturday, as two persons lost money.

Kumar of Modur village lost Rs.30,000 and Siddappa of Chokanahalli lost Rs. 20,000 to pick-pocketers, it is learnt.