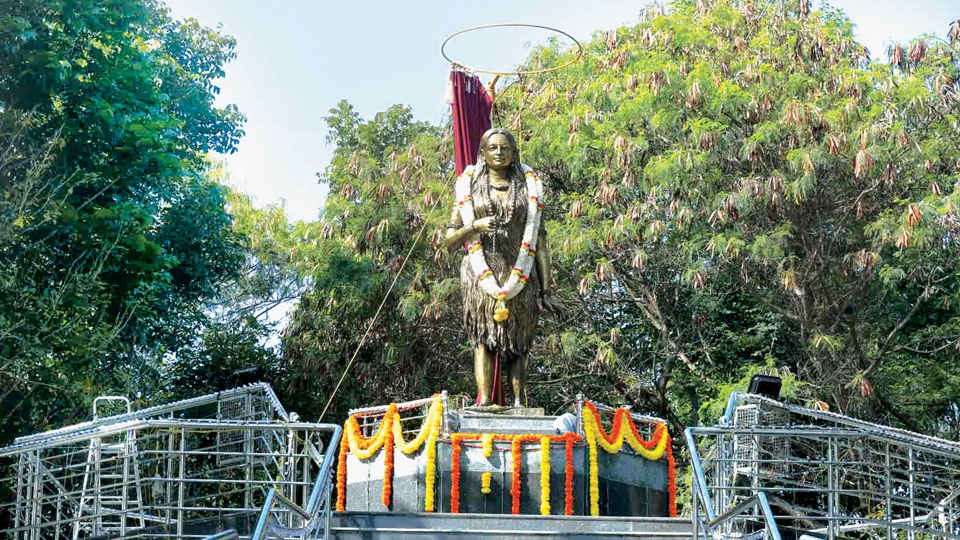 Mysore/Mysuru: Chief Minister B.S.Yediyurappa (BSY) will be in city tomorrow (Jan. 23) to take part in a couple of programmes. Yediyurappa will arrive from Bengaluru at Mandakalli Airport in Mysuru at 10.50 am, following which he will unveil the Statue of Akkamahadevi installed on Akkamahadevi road in J.P. Nagar.

Thereafter, the CM will  travel by road to Vijayanagar First Stage, where he will inaugurate the Basava Bhavan constructed by Hebbal-Vijayanagar Basava Samithi, on  11th Main road, Vijayanagar 1st Stage, at 12.30 pm. The CM will later leave Mysuru for Shivamogga from Mandakalli airport.

The Statue of  Akkamahadevi, a female poet (Vachana) and an inspirational woman of Kannada literature of the 12th Century, is installed  on  the road leading from Sterling Theatre to Ring Road at J.P. Nagar. The 11 ft. tall bronze statue, said to be the first-of-its-kind in the State, is installed by J.P. Nagar Sharana Vedike, with help from MCC.

While the MCC has provided space for the Statue, the Vedike is responsible for its maintenance. Underlining the significance of the Statue, Puttarajappa said that it will help people in understanding the Vachanas of Sharanas.

Continuing, he said that the project also features Akkamahadevi Mandira and  a few years ago, the then Mayor B.L. Bhyrappa had sanctioned Rs.18 lakh for the project. Also, the present area  Corporators Shanthamma Vadivelu and Sharadamma Eshwar have sanctioned Rs.10 lakh each. But the MCC has not yet released any of the sanctioned amount, he maintained.

READ ALSO  Pataaki Banned: No sale or bursting of firecrackers in city

The bronze Statue, weighing 982 kgs, is built at a cost of Rs.14 lakh and the Akkamahadevi Mandira at a cost of about Rs.1 crore, with funds collected through public donations, big and small, he said.

Stating that the Statue was sculpted by Bengaluru based sculptor Venkatachalapathy, he said that the sculptor will be felicitated on the occasion.

Ahead of the unveiling, puja was performed to the Statue this morning, which was followed by a Bhajan contest for women groups of Mysuru.

On Jan.23, renowned singer Nitin Rajaram Shastri will present devotional songs from 9.30 am to 10.30 am.

Speaking on the occasion, Ramdas said that Akkamahadevi belongs not just to a community or religion, but to the entire world.

Maintaining that it is difficult for us to understand the great thoughts of Akkamahadevi, he said that the venue will turn into a big spiritual centre in future.

READ ALSO  Twist in the Plot: Mysuru loses out on Film City

Akkamahadevi Mandira will depict the life and all the vachanas of the great poet, he added.

Minister S.T. Somashekar will release the book  ‘Akkana Hambala’ on the occasion.

Continuing, Basavaraju said that the Basava Bhavan has been built at a cost of Rs.5 crore on a 50’x100’ plot. The ground floor of the Bhavan will have an auditorium with a seating capacity of 500 and the underground has a dining hall with a seating capacity of 300. The first floor has 20 rooms, toilets and wash rooms, he said adding that the Bhavan has all other facilities for conduct of marriages and other functions.

Noting that the Bhavan will be let out on rent at about Rs.90,000 to 95,000 a day, he said that the Bhavan has been built with donations given by philanthropists, people’s representatives and members of the public.