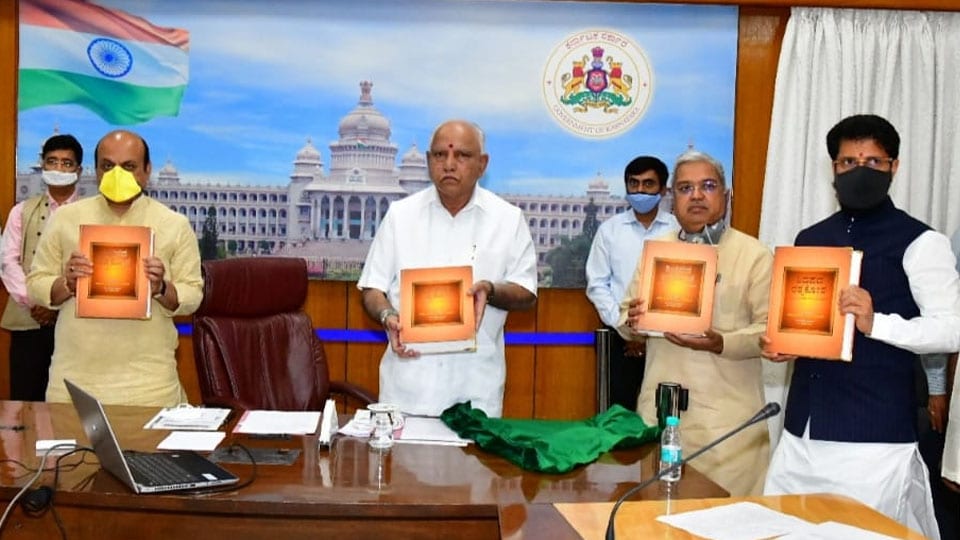 Mysore/Mysuru: Chief Minister B.S.Yediyurappa released ‘Shivapada Ratnakosha,’ a volume of Veerashaiva-Lingayat Dictionary, brought out by JSS Mahavidyapeetha, online at a programme organised at his office in Bengaluru yesterday, which was streamed  live  on Facebook at Suttur Mutt premises in Mysuru.

Speaking on the occasion, Yediyurappa said he was happy to release this huge volume, which comprises Vachana Sahitya and Veerashaiva poetry.

Noting that the over 1,000 page volume is a treasure of knowledge, he said that the book introduces Veerashaiva dharma, culture and principles.

Highlighting the role of Mutts in the growth of the State, Yediyurappa said that Mutts have revolutionised learning  by imparting education to poor children and weaker sections of the society.

Stating that Suttur Mutt has taken the lead in imparting education, he said  Dr. Sri Shivarathri Rajendra Swamiji dedicated his entire life for the cause of poor children.

Highlighting that Suttur Mutt is globally known for its ‘Trividha Dasoha’ (Education, Food and Shelter), the CM said that the volume should reach every doorstep and the people must learn from it.

Kannada and Culture Minister C.T. Ravi, who spoke after receiving the first copy, said that the volume has 4,681 references and has been brought out in a most apt manner, after carrying out thorough studies and making comparisons with hundreds of contemporary books.

Pointing out that Deputy Chief Minister Govind Karjol had sanctioned funds for bringing out the volume when he was Kannada and Culture Minister in the previous BJP Government over ten years ago, Ravi said that the volume is of much help to the people for leading a meaningful life.

Stating that Suttur Mutt has grown by leaps and bounds under Sri Shivarathri Deshikendra Swamiji, he said that the Mutt has been providing education, food and shelter to scores of children from across the country, which is a great service.

He further said that the volume can become a handbook for religious studies and research.

Home Minister Basavaraj Bommai said that the volume is educative to the administrators.

Noting that the volume has made its own mark in Kannada Literature through its clarity and specific nature, he said that every person should read it for gaining useful knowledge.

Suttur Seer Sri Shivarathri Deshikendra Swamiji, who graced the occasion at the city event, said that JSS Mahavidyapeetha’s Sri Shivarathreeshwara Granthamaale will soon come up with another important work.

Stating that an English work scripted by Vijayapura Jnanayogashrama’s Sri Siddeshwara Swamiji on Patanjali Yoga Sutras will soon be released, he said that the release of the book, which has the Prime Minister’s compliment, has been delayed due to the outbreak of COVID-19.

Pointing out that ‘Shivapada Ratnakosha’ took nine years of hard work, he said that the volume has derivations from its Sanskrit version, published in 2011.

Highlighting the role of Sri Siddeshwara Swamiji in bringing out the volume, the Suttur Seer said that the volume will be made more complete in the future editions.