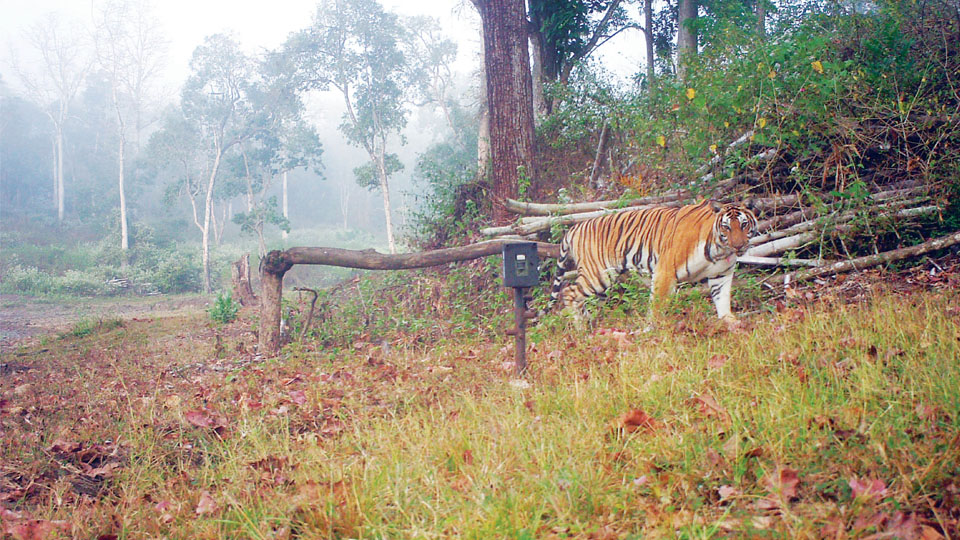 Nagarahole National Park has 11.82 tigers per 100 square kilometres and Bandipur has 7.7

Mysore/Mysuru: In what is said to be the ‘world’s largest effort invested in any wildlife survey till date’, Corbett Tiger Reserve of Uttarakhand has recorded the highest tiger density amongst 50 tiger reserves in India — it has 14 tigers per 100 square kilometres which is highest in India.

The ‘Status of Tigers, Co-predators, and Prey in India’ is based on the 2018 tiger enumeration exercise, the summary of which was released last year by Prime Minister Narendra Modi and yesterday’s report was released by Minister for Environment, Forest and Climate Change Prakash Javadekar in New Delhi on the eve of International Tiger Day that is celebrated today (July 29).

In the world, there are over 3,900 tigers in 13 countries including India, Bangladesh, Vietnam, Indonesia and South China as the feline is extensively hunted down by poachers. Of them, India has 2,967 tigers. The tiger census, conducted once in four years, in 2018 pegged the population of tigers across India at 2,967, with Madhya Pradesh emerging at the top of charts with 526 and Karnataka a close second with 524. The third spot went to Uttarakhand, in the forests of which State were counted 442 tigers.

Across all tiger reserves of Karnataka, there were 1,500 camera traps in place. Forest officers say that conducting a tiger census is an onerous task. Estimating the number of tigers using images captured through camera traps is not easy since the offices and field employees have to crosscheck all of them for duplication and segregate them accordingly.

In sync with Government of India’s “Digital India” initiative, the census data was collected using an Android based application- M-STrIPES (Monitoring system for Tigers’ Intensive Protection and Ecological Status) and analysed on the applications’ desktop module.

As per the report, across India, the tiger census was conducted for 15 months involving survey of 3,81,400 square kilometres of forested habitats, 5,22,996 kms of walk by State Forest officials, laying of 3,17,958 habitat plots, totalling a human investment of 5,93,882 man days.

Besides, cameras were placed in 26,760 locations which gave a total of 35 million images of wildlife including 76,523 images of tigers. Segregation of these images was possible in a short time because of use of artificial intelligence software, the report reveals.

Founder of the Wildlife Conservation Foundation Rajkumar Devaraje Urs attributed the recognition for the tiger census on the global stage to the groundwork of the volunteers and forest staff. More than 330 volunteers supplemented the efforts of the Forest Department personnel at the Bandipur Tiger Reserve, where more than 380 camera traps were set up.

He attributed the significant rise in numbers of tigers in Bandipur and Nagarahole to the conservation and anti-poaching measures initiated by the Forest Department. The density of prey animals were also analysed and were found to be high enough to sustain the predator population in good numbers. Also, educating and involving tribals and villagers living in the periphery of the Tiger Reserves contributed to the increase in numbers, he added.