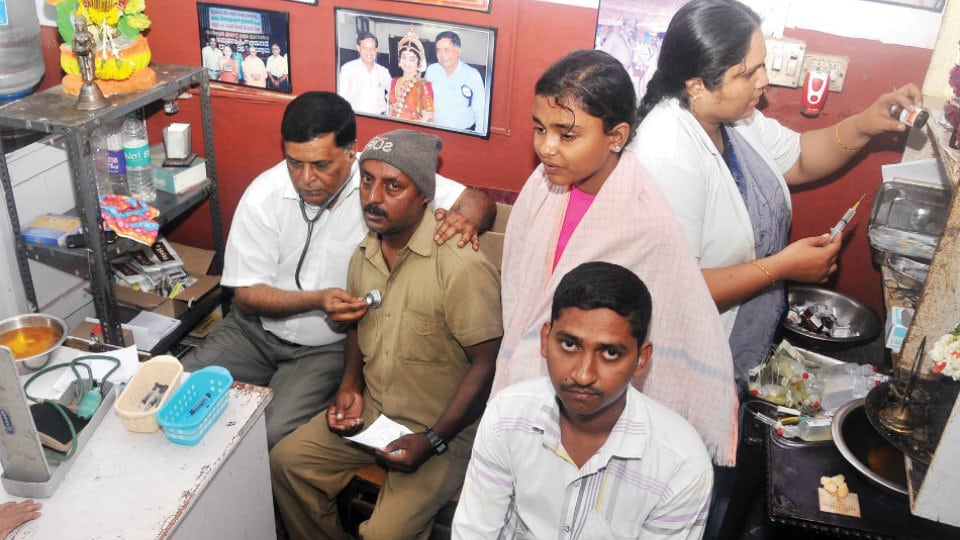 The fear of widespread vector-borne diseases is spreading panic among the people. The hospitals, both government and private, are full with patients. Even though the scene is the same outside a private clinic in Siddarthanagar, the patients flocking the clinic are going back with great relief.

Sri Manjunatha Clinic on T. Narasipur Main Road (Male Mahadeshwara Road) in Siddarthanagar (near Mysore Dairy) is run by Dr. Bellipadi Satish Rai. Unlike many private hospitals and nursing homes who cash in on such bleak situations, Dr. Rai is treating the patients afflicted with Chikungunya and Dengue free of cost, since the past 25 days and setting an example for others to follow.

The people-friendly doctor, Dr. Rai is also distributing free medicines to very poor patients. He charges fees for patients who are economically sound and use it for the treatment of poor patients. The patients who are cured from the doctor’s treatment, in turn tell it to others. Thus, by word of mouth, people flock to Dr. Rai’s clinic. Since there is no particular treatment for Dengue, each doctor treats the patient based on his experience. Similarly, Dr. Satish Rai, using allopathic medicines, treats and cures the patients. 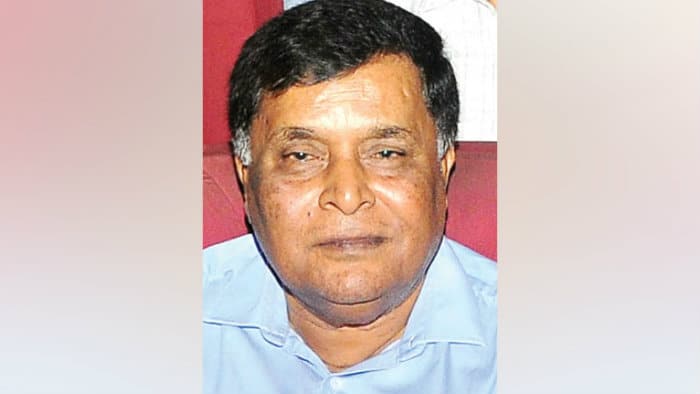 What is so unique about the treatment of Dr. Rai that he is able to cure the patients? There was Chikungunya scare in 2007 and Dengue scare in 2010 in Mysuru city. “Even I suffered from Dengue and it was a hellish experience. I tried my best to get a definite cure. I tried contacting many experts but could not get any information. Then I experimented with allopathic medicines through drip and within three days, I was cured. There were no side effects. The same method I am using for my patients,” said Dr. Rai.

READ ALSO  Will these damaged name boards in Siddarthanagar be replaced?

Does it mean one treatment cures all? Dr. Rai cautions. “It does not mean that this is a definitive cure for all patients. However, with the treatment I am giving, patients with Chikungunya and Dengue are getting cured,” Dr. Rai told Star of Mysore.

Dr. B. Satish Rai was born to a very rich family, who owned thousands of acres of land at Perne village in Puttur Taluk, Dakshina Kannada district. However, following the Land Reforms Act his father Narayana Rai lost all the properties in 1962 and the family was in dire straits. He lost his father in 1968 while he was doing his final year MBBS in Mysore Medical College. He was forced to earn his own money to complete the degree.

Hence, Dr. Rai started a clinic in Siddarthanagar and began private practice. He is continuing his practice in the same clinic since then. Along with practicing Medicine, he was also Home Guard Commandant for 25 years. A littérateur and a poet, he has produced 21 works. The ninth edition of his ‘Gitamritha Vahini’ is going to be released next month.

Rush of patients in front of Sri Manjunatha Clinic on the busy T. Narasipur Main Road in Siddarthanagar near Mysore Milk Dairy.

Through his Bellipadi Yaksha Samskrithika Trust, Dr. Rai, himself a Yakshagana artiste, is promoting this traditional art. Involving himself with other doctors and the Forest Department, he has spread awareness regarding health and environment.

A recipient of several awards including the three National ones — Best Publication in Kannada for Gitamritha Vahini (1995),  President’s Medal for Social Service (1999) and Dr. B.C. Roy Award (2008) — the  73-year-old Dr. Rai says:

“I am least bothered about what other people say. I am serving the poor to seek peace of mind in my profession. Many times, I have given my own blood to needy patients. Just like Dengue, people had suffered from Hepatitis-B a couple of years ago and they had panicked. I had organised hundreds of camps and enlightened the people that it was not a life- threatening disease. I am following the footsteps of my father Perne Narayana Rai who was an Ayurveda Pandit and treated the poor patients free. I was even forced to sell my site in Vijayanagar to stick to my principles of treating the poor and needy patients for free.” 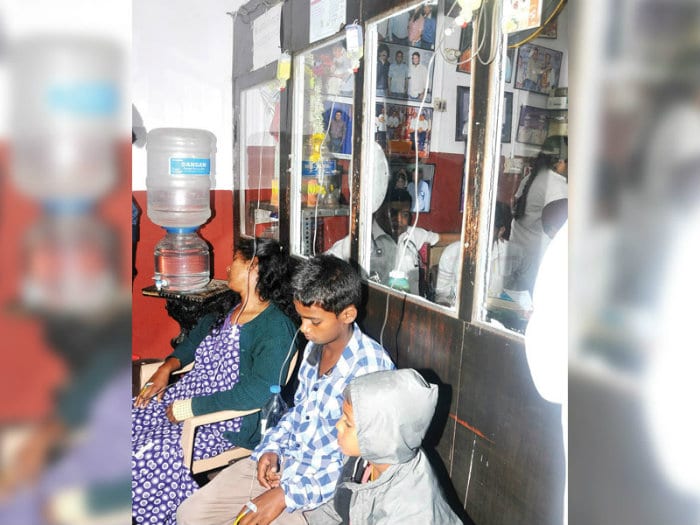 Though he is the elder brother of Forest Minister B. Ramanath Rai, this common man’s doctor has not curried any favour from him and continues to serve the society.­

People are scared of spread of viral diseases. There is also fear for life. Hence, it is very important to counsel such anxious patients psychologically and give them mental confidence. We must instil in them the confidence that they will be cured with medicines, says Dr. B. Satish Rai.

Every day nearly 350 patients from Udayagiri, Rajivnagar, Ghousianagar, Gayathripuram, Shanthinagar, Hunsur, Malavalli and Nanjangud come to my clinic. Majority will be cured within four to five days. If a patient is treated properly, then there is no need to be admitted to a hospital. Even if the white blood corpuscles has come down to less than 25,000 in patients, they can be treated with just medicines and cured, Dr. Rai explains.

4 COMMENTS ON THIS POST To “A Common Man’s Doctor: Bellipadi Satish Rai”