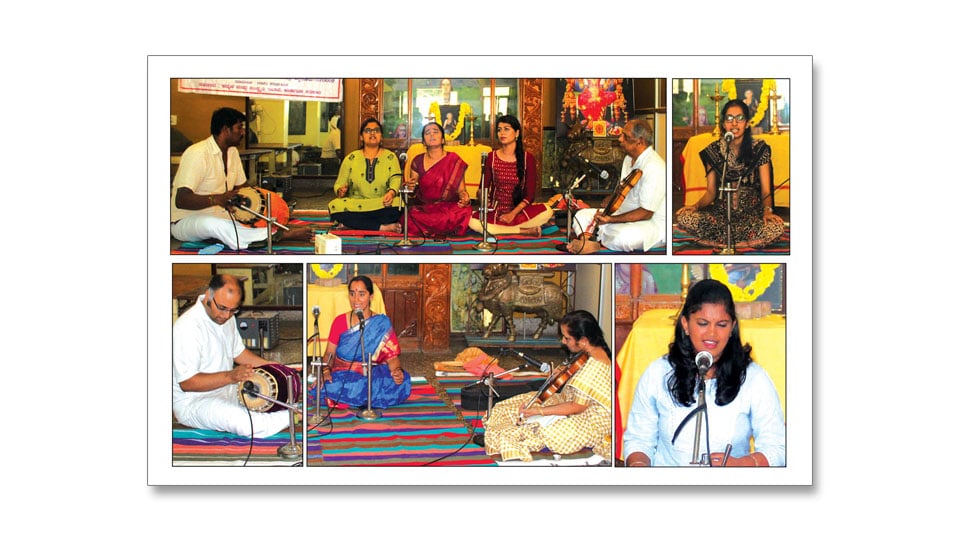 The Tyagaraja Sangeetha Sabha of Mysuru is unique in many ways. Without blowing any trumpets, it is quietly expressing its deep love for Kannada language which is certainly  not restricted only to November! This Sabha too has been arranging its monthly music concerts like any other Sabhas. But behind it lies its love for the language and its service to Kannadigas.

The concerts arranged by Tyagaraja Sangeetha Sabha from day one, has been only by Kannadiga artistes! It has strictly followed this rule till today. Hence, whether the artistes reside in Karnataka or elsewhere in the world, they are welcome here. Another unique feature is celebrating Muthuswami Dikshitar’s Day. Celebrating Tyagaraja and Purandaradasa Aradhana is very common among musicians and Music Sabhas. But celebrating Dikshitar’s Day on the Amavasya of Deepavali is yet another  practice they have strictly followed. (It was on the same day the great composer breathed his last.)

Young Vidushi M.R. Sudha sang on the 24th of October at Sri Rama Mandira, Jayanagar, under the aegis of Tyagaraja Sangeetha Sabha. She was accompanied by Vidwans C.N. Tyagaraju (violin), A. Radhesh (mridanga) and Raghunandan Vyasa Rao (ghata).

Sudha has imbibed good style of rendering kritis by her teacher Vidushi Gowri Kuppuswami. Invariably, a tinge of GNB baani can be traced in her singing. A good voice and sound knowledge of Tala boosts her singing.

A neat presentation of a Varna in Panthuvarali by Shatkaala Narasayya in two speeds gave a good start. ‘Vallabha nayakasya’ in Bhegade had a frill of crispy kalpana swaras. A neat delineation of Kharaharapriya by Sudha and Tyagaraju lead to the evergreen ‘Raama nee samaanamevaru’ by  Tyagaraja. Yet another popular composition ‘Brovabaarama’ (Bahudhari) paved way to a soothing alapana of Hameer kalyani. Every phrase was emotionally charged in this heart touching raga. Swathi Tirunal’s ‘Gaangeya vasanadhara Padmanabha’ was a good choice. The kalpana swaras between the vocalist and violinist was enjoyable.

Raga Mohana was the main raga of the day. Sudha was at the  peak of her manodharma.

Just the five notes of this  Audava scale displayed many enchanting shades of the raga. Tyagaraja’s ‘Nannupaalimpa nadachi’ was presented in perfect tempo. The classic swaras that followed the neraval were excellent. Tyagaraju’s melodic violin support was commendable. Radhesh and Raghunandan’s percussive support was worth mentioning.

Under the pen name of ‘Guruguha,’ Dikshitar composed a number of compositions. It is said that he was the first to introduce ‘Samashti charana’ kritis. His clusters of compositions like Kamalamba Navavarana, Navagraha Kritis and Neelotpalamba Kritis speak volumes of his mastery on many subjects like Advaitha philosophy, Tantra, Mantra, Jyotishya shastra and Sanskrit language. Many of his compositions describe in detail the different deities. Mastering his composition is a challenge for learners.

Dikshitar breathed his last on the amavasya day of Deepavali. Thus, ‘Guruguha Jayanti’ is observed on that day. In Mysuru, Sri Tyagaraja Sangeetha Sabha is one which celebrates that along with all the musicians of the city. On the 28th of October, young and senior artistes flocked together at the Prarthana Mandira of Sri Chandramouleeshara Temple to offer individual seva after which, they all sang the Navavarana Kritis of Dikshitar.

2 COMMENTS ON THIS POST To “Concerts mark Dikshitar’s Day”