Home » News » Congress to take out Bharat Jodo Yatra in Karnataka from Sept.30 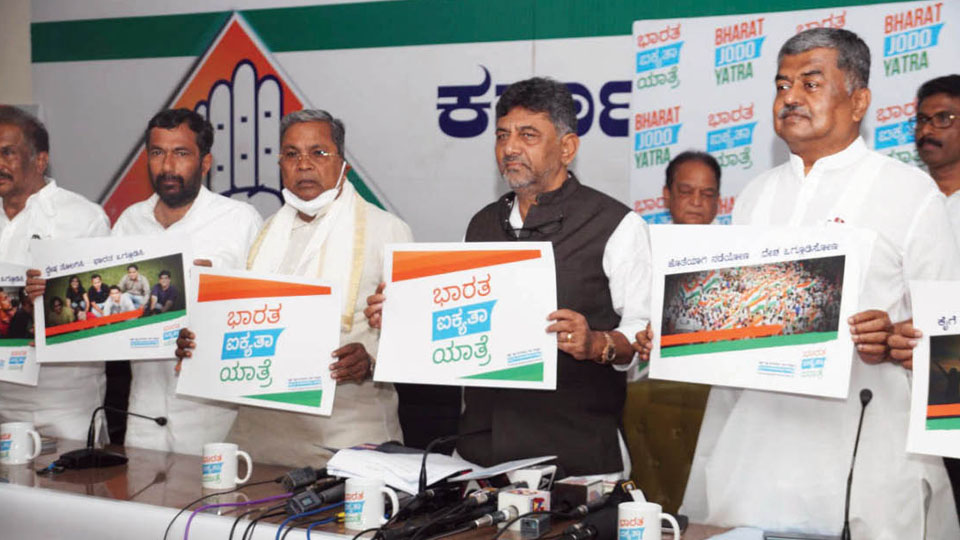 Congress to take out Bharat Jodo Yatra in Karnataka from Sept.30

Bengaluru: Ahead of the 2024 Lok Sabha polls, the Congress will take out a ‘Bharat Jodo Yatra’ in the State from Sept.30 as part of the party’s nationwide march for unifying the people of the country.

Noting that the Padayatra will be a trend-setter for the party cadres in other States, the KPCC President said that the objective of the Yatra is to spread a message on unity, peace and harmony across the country.

Stating that the Yatra will cover 25 kms every day in the State, he said that the people from all districts will be allowed to take part in it. Leader of the Opposition in the Legislative Council B.K. Hariprasad has been entrusted with the responsibility of managing the Padayatra, he added.

Opposition Leader and former Chief Minister Siddharamaiah, who also spoke, stressed on the need for unifying the country at a time when  Democracy has come under threat during the current BJP Governments at the State and the Centre. Alleging that politics of polarisation is going on in the State, he asserted that the Congress is working for building an equal society.

The Congress has named Co-ordinators for ensuring the success of the rally, according to which N.R. MLA Tanveer Sait, former MLAs Vasu and M.K. Somashekar have been appointed for Mysuru city, MLAs H.P. Manjunath and Dr. Yathindra Siddharmaiah for the District, former Ministers Cheluvarayaswamy and P.M. Narendraswamy  and MLC Madhu G. Madegowda for Mandya district and KPCC Working President R. Dhruvanarayan for Chamarajanagar district.

READ ALSO  Food for the shelterless

2 COMMENTS ON THIS POST To “Congress to take out Bharat Jodo Yatra in Karnataka from Sept.30”