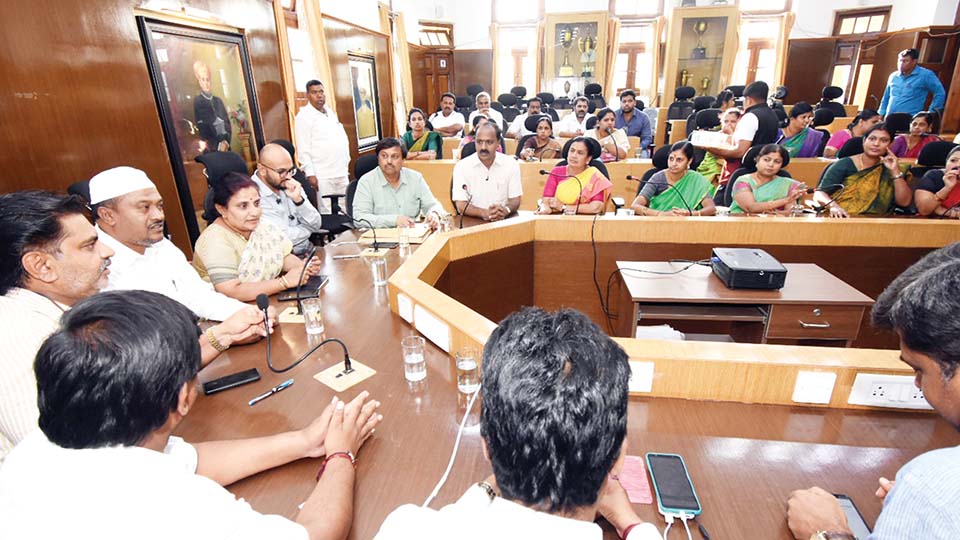 Mysuru/Mysore:  An appraisal meeting to elicit opinions on Swachh Survekshan 2020 held at the Nalwadi Krishnaraja Auditorium of Mysuru City Corporation (MCC) last evening ended in a chaos and brought to fore the difference of opinion among Mayor, Corporators and the MCC Commissioner. The Corporators were upset as the Mayoral grant of Rs. 50 lakh per ward was not released.

The Survekshan is scheduled to begin across India on Jan. 4 and Mysuru is hoping to regain the Cleanest City tag which it had subsequently lost after winning it consecutively twice in 2015 and 2016.

Rather than discussing the ways and means to regain the Cleanest City recognition, Corporators and authorities squabbled over release of funds and non-availability of money to take up works. As the arguments reached a high-point, Corporators staged a walk out. No decision was, however, taken on maintaining cleanliness.

The Mayoral grant of Rs. 50 lakh per ward was announced during the Budget last year but was yet to be released owing to fund shortage. The Corporators wanted Mayor Pushpalatha Jagannath and Commissioner Gurudatta Hegde to take steps to immediately release funds.

As the meeting was called to discuss the Swachh Survekshan 2020, the Commissioner asked the Corporators not to deviate from the topic and focus on the objectives of the meeting to secure higher rankings in the clean city rankings. But the Corporators insisted on discussing the finances of the MCC and wanted to know when the Commissioner would release the Mayoral grants. They threatened that they will not co-operate in the forthcoming Swachh Survekshan exercise.

Seeking answers from the Mayor and the Commissioner, the Corporators wanted to know if the MCC had gone bankrupt. Responding at times to the outbursts of the Corporators, Commissioner Gurudatta Hegde said that forget Rs. 50 lakh grants, there was no money in the MCC to give salary to Pourakarmikas.

Former Mayor Ayub Khan questioning the officials as to why the MCC was competing in the survey and criticised them for making cleanliness a monthly exercise rather than ensuring that the city was kept clean on all 365 days of the year. He said that the door-to-door collection of waste was not being implemented in at least 50 per cent of the 65 wards.

This was supported by a few other members including B.V. Manjunath, Shivakumar and S.B.M. Manju who said that their demand for mechanised tippers and autos had not been fulfilled yet.

Meanwhile, Commissioner Gurudatta Hegde said that this was not the forum to discuss the fund issue and wanted the members to concentrate on the subject of Swachh Survekshan. But this angered Corporators and they refuse to relent and wanted a commitment from the Commissioner on the release of the Mayoral grant.

When the Commissioner said that the MCC was cash-strapped and he could not make allocation of Rs. 35 crore at this point of time. Some Corporators urged the Commissioner to at least release Rs. 25 lakh of the grants immediately. As the demand evoked no response, Corporators staged a walked out, leaving the Mayor and officials red-faced.

After the Corporators staged a walk out, Mayor Pushpalatha Jagannath and MCC Commissioner Gurudatta Hegde got embroiled in a war of words. Upset by the walk out, the Mayor openly lashed out at the Commissioner for being rigid on the issue of funds.

This happened in front of the media persons who had not left the venue. As the Mayor spoke to the Commissioner, he got up from his chair and walked towards his chamber. The Mayor took objection to it and said that such an attitude was not correct.

The Commissioner shot back saying that the Mayor should speak to him with respect. Though the situation threatened to snowball into an ugly spat, Commissioner Hegde, in a controlled manner, said he would rather discuss the issue with the Mayor in the chamber and not in the open Council Hall. The mayor agreed to this.

Speaking to reporters later, Mayor Pushpalatha Jagannath said that the Corporators were seeking what was announced and approved in the Budget and they were seeking funds for public works and not for their personal use. “Corporators are answerable to the people in their respective wards and as there are a lot of pending works, the Corporators are upset that their rightful funds have been denied. As a Mayor, I am empowered to sanction Rs. 1 crore per ward. But the Commissioner keeps telling us there is shortage of funds. Actually, we have to manage with the available funds,” she added.