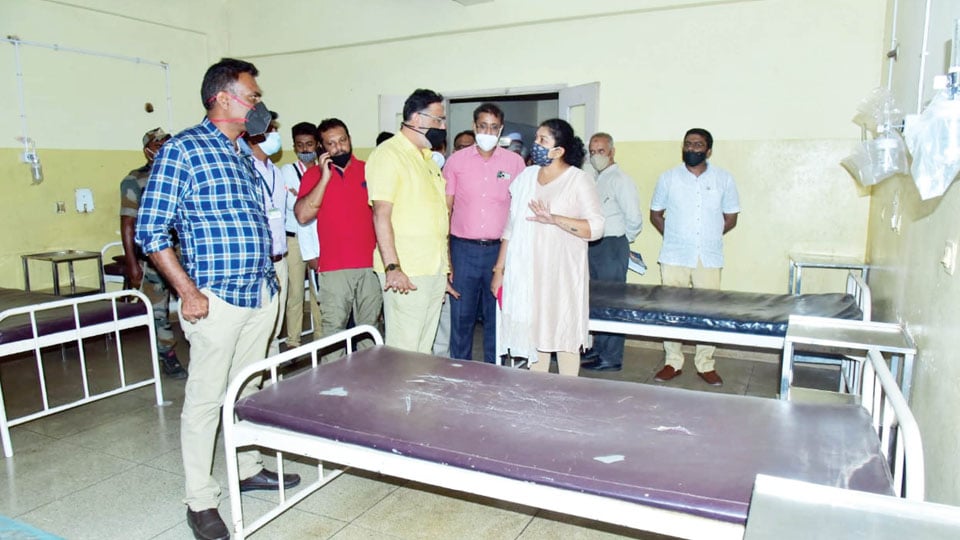 Mysore/Mysuru: The Beedi Workers Hospital at Shanthinagar, N.R. Constituency, will  also function as a COVID Care Centre (CCC) from Apr. 26.

N.R. MLA Tanveer Sait, who had stressed on urgent need for setting up a Covid Care Centre in the Assembly segment at a recent meeting attended by District Minister S.T. Somashekar and Health Minister Dr. K. Sudhakar, visited the Beedi Workers Hospital along with MCC Commissioner Shilpa Nag and other officials on Friday.

Speaking on the occasion, Tanveer Sait said that the 200- bed Hospital will also function as a CCC from Apr.26. Noting that N.R. Constituency has a large number of labourers and poor, he said that all these sections of society are living in small spaces, where it is difficult for the infected to undergo home isolation. As such, the CCC at the Hospital will largely help them to get care and treatment, he said.

Pointing out that last year the CCC was set up at Farooquia College, Sait said this year it could not be done as exams are going on. As such, he had urged the district administration to set up CCC at Beedi Workers Hospital three months ago. Now, following directions from the District and Health Ministers, the MCC has taken measures for setting up the CCC, which will start functioning from Apr.26.

READ ALSO  I Paid the Price for confronting Land Mafia

MCC Commissioner Shilpa Nag said that Mysuru has been reporting  nearly 800  COVID-19 positive cases on an average every day and the situation is far more serious when compared to last year.

Asserting that the district administration is taking all necessary measures to control the spread of the virus, she said that following the demand by N.R. MLA and other people’s representatives of the area, the Beedi Workers Hospital at Shanthinagar will start functioning as a COVID Care Centre.