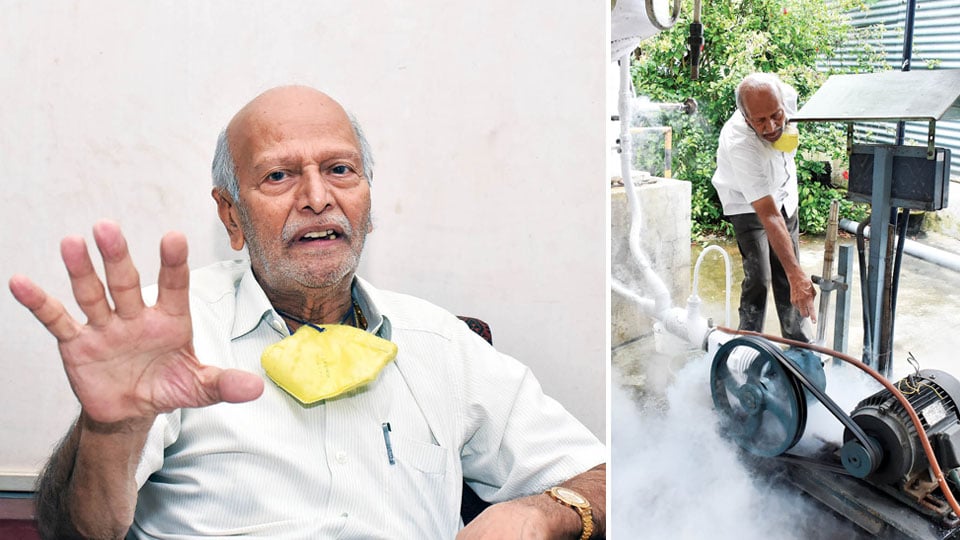 As Covid-19 rages on and ravages our lungs, the demand for oxygen is at an all-time high. So high that the Indian Society of Critical Care Medicine’s Karnataka Chapter has stated that oxygen cylinders will not be enough and recommends that the Government invest in liquid oxygen tanks in Hospitals with more than 150-200 beds. More importantly, procuring oxygen cylinders in small cities like ours is becoming as important, if not more important than ventilators.

The demand for oxygen in our city has increased manifolds as more and more patients are being put on “oxygen beds.” While our city has quite a few suppliers of this much-needed element, one-man stands out, not because of his oxygen is special, but his commitment level is.

Thirty-eight-years-ago, in 1982, Srinivas Tantri sat down for his morning coffee and news. He opened the newspaper and a headline jumped at him. It read, “Shortage of Oxygen in K.R. Hospital, patients die.”  Srinivas was disturbed and shocked that people suffocated to death because they could not get the basic life support — oxygen.  And that day, that headline changed his life.

Srinivas Tantri had moved to Mysuru from Mangaluru after his B.Com. Even though he had got a job in Canara Bank, Mumbai, he did not take it up as he says he didn’t care for the job, he wanted to be a Post-Graduate more. While studying his M.Com at Manasagangothri, he used to perform at various events as he was a trained Hindustani classical singer. At one such event, Anand Rao of Ganesh Beedi noticed him, spoke to him and later offered him a job as the Manager of Anjana Match Factory, which he was running. Srinivas  did a good job and soon the benevolent Anand Rao made him a Partner! This was in 1971.

The enterprising Srinivas then opened his own light bulb factory called ‘Venus Lamps’ which he shut down in 1995. It was while running this bulb factory that he read that newspaper headline which sent him on his oxygen journey.

So in 1982, Srinivas Tantri collected his savings and paid up Rs. 1 lakh as deposit to a company in Coimbatore to get “air compressor” filled oxygen cylinders to supply to Mysuru Hospitals. Recalling the days when oxygen was in short supply he says when he visited Mission Hospital to solicit business for his oxygen cylinders, the then Chief of the Hospital Dr. John Eswaraiah came out from  the Operation Theatre and placed an order.

Srinivas later went on to set up Mysuru’s first centralised gas supply pipeline at JSS Hospital, then Gopala Gowda Shanthaveri Memorial Hospital and Kamakshi Hospital. Now, he has a factory in Yadavagiri where he fills cylinders with medical oxygen, using liquid oxygen that he gets from Bengaluru.

Speaking of Covid, he says up until the month of May 2020 the demand was only for 25-30 cylinders a day but now it has shot up to 200 cylinders a day and he has ordered 150 new cylinders from Gujarat as the demand seems to be increasing. But what makes him special is that even today, at the peak of Covid pandemic, when most octogenarians are hiding out, this 80- year-old man runs the only 24×7 Oxygen Supply Unit and it runs 365 days !

When asked what drives him to come to work in these covid times  he says, “If I’m not working now when I’m most needed, then what’s the point. When asked if he has help, he says, “My son is well-settled in Infosys, so he does not want this, but I have very good workers so I manage. And I like working. Being useful.”

Speaking of his “secret to good health”  and, as he puts it “staying in working condition” he says, he follows the old Kannada proverb, “Maathu Ballavanige Jagalavilla, Oota Ballavanige Rogavilla”, which means “One who knows how to talk will have no fights and one who knows what to eat will have no sickness.” He says he rarely eats out and hardly ever eats oily food, while adding “oh! and one should keep busy, have a purpose or passion.”

Srinivas Tantri’s attitude reminds us of the difference between interest and commitment — “When you are interested in doing something, you do it only when it’s convenient. When you are committed to something, you accept no excuses; only results.” Tantri has been committed and the result of his commitment is, as he puts it,  “Sir, I’m proud to say since I’ve opened my oxygen supply that headline has never repeated itself. No one has died because of shortage of oxygen in our city.”  Ah! Reminds us, commitment is what turns work into work ethic!

It also reminds us that along with doctors, nurses, ambulance drivers, …there are 80-year-old Corona Warriors hidden in plain sight.