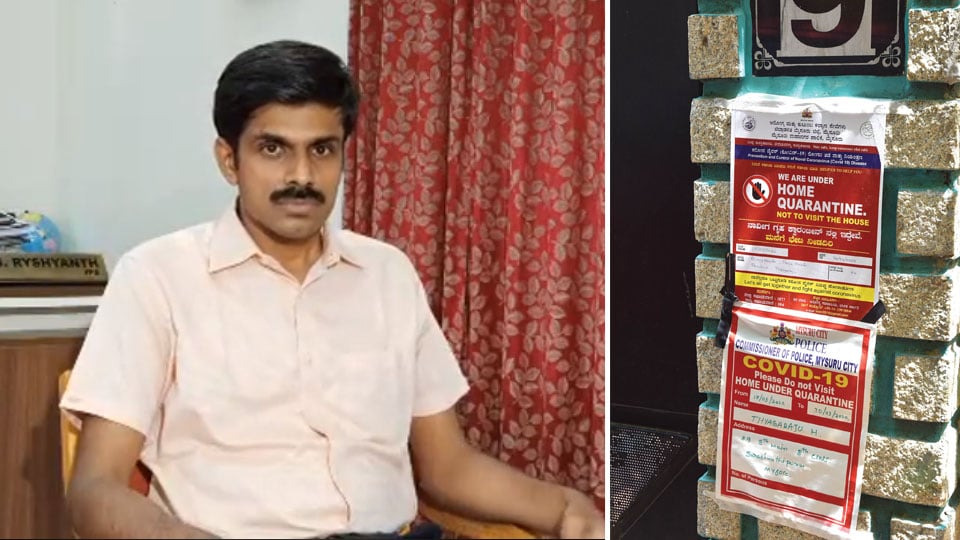 Mysore/Mysuru: Following complaints that some people who are Home Quarantined are removing stickers pasted on their houses, Deputy Commissioner Abhiram G. Sankar has warned of criminal proceedings against those found to have removed stickers.

Pointing out that stickers are pasted on the houses of those who are under Home Quarantine to ensure the safety of their own and also the health of those  residing in the vicinity, the DC said that only the Health Department Officials have the authority to remove the stickers and none else.

Stating that the District Administration has come to know of removal of stickers at two places in Nanjangud, he said that he has given instructions to officials to register criminal cases against those who remove Home Quarantine stickers in the future.

Asking all persons and their  primary and secondary contacts who had attended the Delhi Nizamuddin Tablighi Jamaat Meet to voluntarily undergo a health check-up at the COVID-19 Hospital, Sankar said that it was very important to do so in the interests of their family and community health.

Stating that Shab-e-Barat religious meet has been disallowed this time due to COVID-19, he said that the State Wakf Board has directed the people to offer prayers at their homes.

Pointing out that home delivery of ration has continued in the district, he said that so far 30 percent of card holders have been covered and the rest of the beneficiaries will be covered in a couple of days.

Superintendent of Police (SP) C.B. Ryshyanth  warned the people against gathering in groups. Noting that it has come to his notice that group prayer meets are taking place despite warnings, he warned of severe action against those who violate lockdown regulations.

Asking those who attended Delhi Jamaat Meet to voluntarily report themselves and  undergo medical check-ups, he cautioned that action will be initiated against those who do not do so.