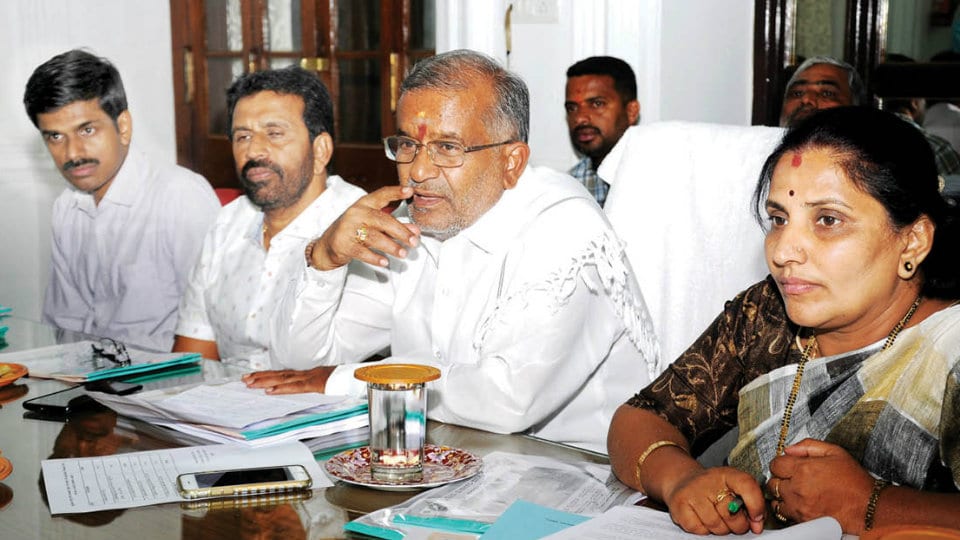 ‘Decision on restoration of Lansdowne Building, Devaraja Market after discussion with CM’

Mysuru: The decision to raze the heritage structures of Lansdowne Building and Devaraja Market or to preserve it will be taken after holding consultations with Chief Minister H.D. Kumaraswamy, said Higher Education and District Minister G.T. Devegowda (GTD).

GTD held a meeting with the members of the Heritage Committee and officials of MCC in this regard, at the Government Guest House here yesterday and said that according to the report of the Task Force Committee the MCC at its Council meeting had take a decision to demolish the structures and re-build it in the same style.

This decision cannot be overturned now. Any decision has to be taken at the Government level. Hence, the matter would be discussed with the CM and Chief Secretary Vijay Bhaskar and a proper decision would be taken. Even the CM will be asked to personally come and inspect the buildings, he said.

Earlier to this, Heritage Improvement and Restoration Committee (HIRC) Member Prof. N.S. Rangaraju said that HIRC had submitted a report to the MCC stating that both the heritage buildings were really strong. However, the Task Force Committee has stated in its report that both the buildings are weak and hence they need to be demolished and rebuilt.

But there is no heritage expert in this committee as all the experts are civil engineers. It is due to lack of maintenance that a portion of the ceiling collapsed in Lansdowne Building and because a pillar was drilled in Devaraja Market North Gate entrance that the arch collapsed. However, it was reflected that it had collapsed on its own. No efforts were made to find out the reason for the collapse. At least now an enquiry must be conducted, he demanded.

In Vijayapura 54 buildings which are nearly 500-years-old have been preserved. In Hampi, the 700-year-old ‘Lotus Mahal’ is still strong. The materials used in these structures are the same ones used in the construction of Devaraja Market and Lansdowne Buildings and hence why are they not strong, he wondered.

Further, he went on to point out that he personally had restored Dr. Radhakrishnan Bungalow and Jayalakshmi Vilas Mansion belonging to the University of Mysore. Even the University Quarters where Prof. K.B. Thotappa lived has been restored which now houses Indian Heritage Citizen Network Foundation (IHCNF) office. Besides, even writer R.K. Narayan’s bungalow in Yadavagiri has been restored.

Likewise, Devaraja Market and Lansdowne Buildings can be restored without being demolished and there are experts who can conserve these structures. Including the 14 Palaces there are hundreds of structures in Mysuru which should all be declared as heritage buildings. The Government should come forward to preserve the heritage structures as Mysuru City is called Heritage City, he urged.

Another expert, Architect Prof. H.D. Nagesh, Principal, Wadiyar Centre for Architecture, said that in Turkey the nearly 550-year- old Grand Bazaar has been preserved. It is the market which is visited by most number of people in the world. There the traders look after their structures without causing any damage to them, he added.

One more expert Prof. V. Deshpande said that both the heritage structures should be retained and not demolished for any reason. He urged for an enquiry regarding the collapse of  a portion of Devaraja Market.

Deputy Mayor Shafi Ahmed, MCC Commissioner K.H. Jagadeesha, Tahsildar Ramesh Babu and other officials were present. Even the representatives of Savani Constructions, who are involved in the restoration work, attended yesterday’s meeting.