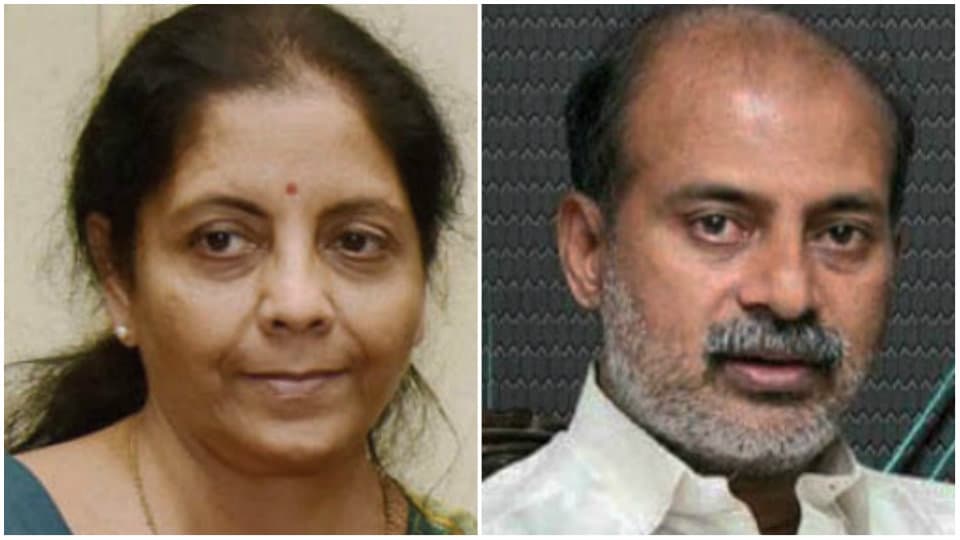 New Delhi: A day after Defence Minister Nirmala Sitharaman’s spat with Karnataka Minister S.R. Mahesh in Kodagu, the Defence Ministry yesterday said that it was unfortunate the way he behaved and described some of his subsequent personal remarks against her are in bad taste.

Sitharaman, who was elected to the Rajya Sabha from Karnataka, was on a tour to flood-affected Kodagu district on Friday. She had a spat with Mahesh and her remarks expressing displeasure against Mahesh at the Deputy Commissioner’s office in Kodagu were telecast by TV channels.

In an official clarification, it referred to media reports that she got angry with Mahesh during the flood review meeting with the Kodagu District Administration and said that Mahesh’s remark lowered the dignity of the Rajya Sabha which showed utter lack of regard and knowledge about Indian polity.

The Defence Minister said, on completion of the field visit as per the programme, she was interacting with the ex-servicemen who were affected by the floods when Mahesh objected and insisted that the meeting of the officials must be conducted first.

She clarified that welfare of the ex-servicemen was an essential part of the Defence Ministry and the same was scheduled in the programme. However, Mahesh insisted that she immediately stop the interaction and proceed to the meeting with the officials.

It said, she then heard the grievances of the waiting ex-servicemen. In spite of the District Administration finalising the programme and the Defence Minister following the same in its entirety, it was unfortunate that the Minister behaved the way he did. “Subsequently, the personal remarks against the Defence Minister were also in bad taste, which did not merit a response.”

She should not have lost her cool: Mahesh

Meanwhile, in Madikeri, S.R, Mahesh said that the Union Minister lost her cool as he pointed out violation of travel protocol and accused her of discriminating against Kodagu people. “It was unfortunate that she did not announce any financial aid,” he said.

Stating that officials cannot lose time as they need to be on the ground for relief works, he said that Nirmala was holding a meeting with other persons. “After that, she was leaving for another meeting. So, I had to point out that officials should not be made to wait in the present situation,” Mahesh said.

Deputy CM Dr. G. Parameshwara accused Sitharaman of “lashing out” against his colleague. “Our Ministers have stayed back in Kodagu for weeks to oversee relief operations along with the District Administration. You should extend to them the same respect that they extend for the help from your end. It was disappointing to see you lash out at my colleague,” he said.

8 COMMENTS ON THIS POST To “Defence Ministry slams S.R. Mahesh for ‘lowering dignity’ of Rajya Sabha”