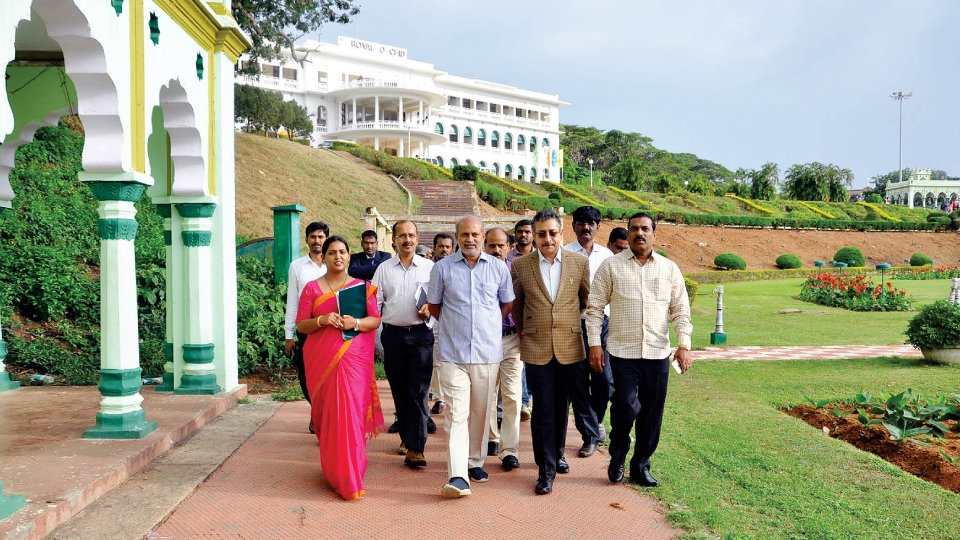 Mandya: Following the announcement by Chief Minister H.D. Kumaraswamy in his Budget speech that the iconic Brindavan Gardens at Krishna Raja Sagar (KRS) Dam will be developed on the lines of Disneyland in the US, Tourism and Sericulture Minister S.R. Mahesh visited the Dam site on Tuesday  and held preliminary discussion with officials.

The CM has allotted an initial funding of Rs. 5 crore for the project. The Minister directed the officials to prepare a blueprint to convert the Gardens into Disneyland. Speaking to reporters after the meeting, Mahesh said that at present, 185 acres of land was available at KRS. “As per the estimate, officials have told me that 500 acres of land is available and most of the land has been encroached. I have directed Pandavapura Assistant Commissioner to survey the land and submit a report,” he said.

The Disneyland-like tourist attraction will be developed in the 185-acre land along with the land that has been encroached. “We will take action to vacate the encroachment. I will hold discussions with CM Kumaraswamy and Water Resources Minister D.K. Shivakumar,” he said.

The Gardens will be developed in such a way that the original shape of the Garden will be retained. The Garden should be redesigned and renovated for a refreshing look for a memorable experience for tourists,” he said.

The Minister directed the officials to set up at least some attractions at KRS so that the place will attract more tourists during this Dasara.

Mahesh pointed out that lack of illumination at Brindavan Gardens was a big turn off for the tourists. “This Dasara we will ensure that bright colours are on display that will enhance the beauty of the Gardens and water,” Mahesh said.

On the issue of allowing people atop the KRS reservoir especially when the water is released for visitors to have a spectacular view of the Dam and the gushing waters, the Minister said that the tourists were banned to ensure their own safety. “There have been incidents where people have risked their lives atop the Dam and also there is the question of Dam security. In the coming days, I will discuss the issue with the CM and take a decision,” he added.

5 COMMENTS ON THIS POST To “Disneyland at KRS: Minister asks officials to prepare blueprint”