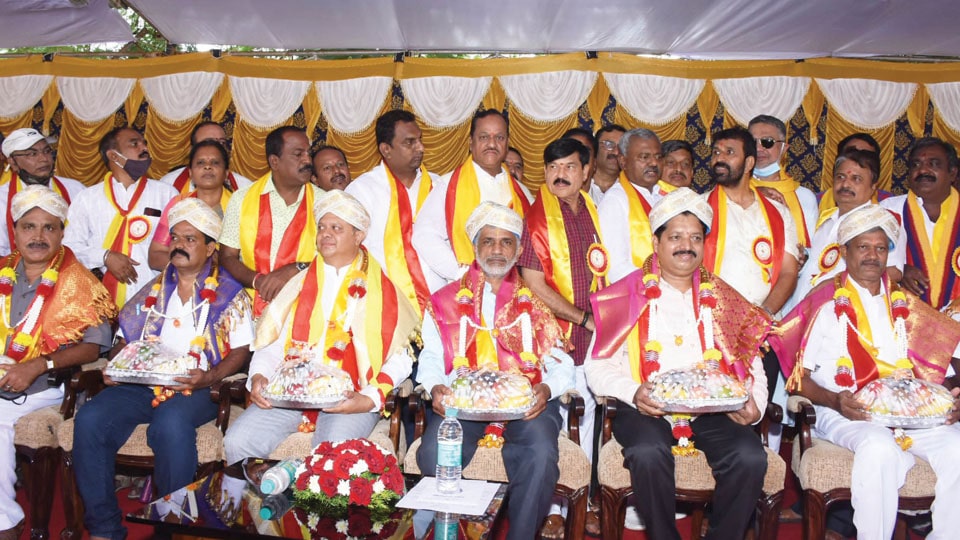 Mysore/Mysuru: Minister for Co-operation S.T. Somashekar, who is also Mysuru District-in Charge Minister, has called upon the people of the State to make maximum use of the option to communicate in Kannada in mobile apps.

He was speaking at the 66th Kannada Rajyotsava celebrations organised by the District Administration in front of Kote Anjaneyaswamy Temple at the Palace North Gate here yesterday.

Urging the people of the State to give primacy to Kannada language in mobile apps, Somashekar said that online cab hiring apps and online food delivery apps have the option to communicate in Kannada and all Kannadigas must make use of this facility.

Expressing satisfaction over the increasing use of Kannada script and language on social media and Internet communications, Somashekar observed that increasing use of the language will help it grow and also become popular in fields such as Science and Technology.

He also maintained that the State Government was working towards promotion of Kannada in the digital world by including the language’s script in Unicode, which facilitates use of Kannada on mobile phones, making  translations and preparation of Kannada Braille. Referring to the use of Kannada in higher education, the Minister noted that there were several subjects in higher education, whose medium of instruction was available in Kannada. The students can also write the exams of these subjects in Kannada, he added.

Continuing, Somashekar said that the State Government, under the National Education Policy (NEP), has permitted four Engineering Colleges to teach Engineering in Kannada.

Appealing the students to make use of this opportunity to promote Kannada in a big way in Science and Technology as well, he observed that this was the first step in imparting technical education at all levels in mother tongue in the State in the coming days. Asserting that Kannada was not a language of any caste, community or creed, Somashekar contended that Kannada was the language of the land, that reflects its culture, traditions, connections and civilization. The Minister also paid rich tributes to towering literary figures such as Kuvempu, Da.Ra. Bendra , D.V. Gundappa etc., and also to other leading personalities who strive for the unification of the State and promotion of Kannada.

Earlier, Somashekar offered puja to Goddess Bhuvaneshwari at the Temple in the Palace premises and later offered floral tributes to the idol of the Goddess at the stage.

A total of 36 achievers received District Rajyotsava Awards on the occasion. They are: