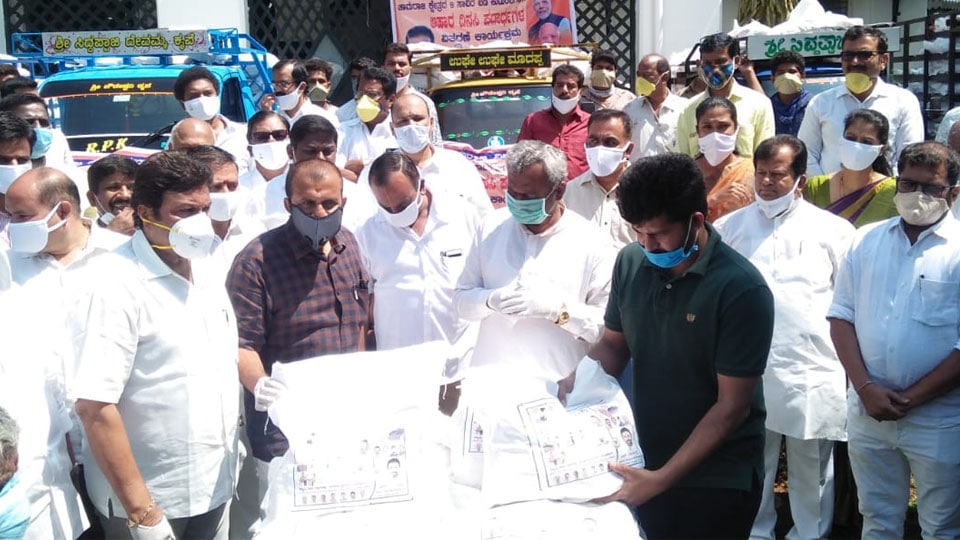 Speaking after the launch, District Minister Somashekar said that he would like to thank the media for their co-operation during this difficult time, when the entire State is under COVID-19 lockdown.

Complimenting MLA Nagendra for the novel initiative, the Minister said that following directions from the Chief Minister, all 2.5 lakh Ration Card applicants of the district will be distributed ration for two-months.

Pointing out that the OTP system has been relaxed at Fair Price Shops, he said that the Ration buyers can put their signature and get their quota of ration for two-months.

Warning Fair Price Shop owners of collecting money for issuing ration tokens, he said that the licence of such shops found collecting money will be suspended. He further said that he will be visiting Nanjangud, the epi-centre of COVID-19 in the district later today.

MLA Nagendra said that 8,000 Ration Kits are ready for distribution among the poor and the needy, identified by the party workers in his constituency.

Each kit will have 5kg of rice,1kg edible oil,1kg each of soji, salt and tur dal, 500gm of horse gram, 2 soaps and a packet of detergent powder, he said and added that the kit covers are printed with Coronavirus precautionary and safety measures.

Nagendra further said that apart from 8,000 kits, 4,000 more kits will be distributed in the coming days if found necessary.