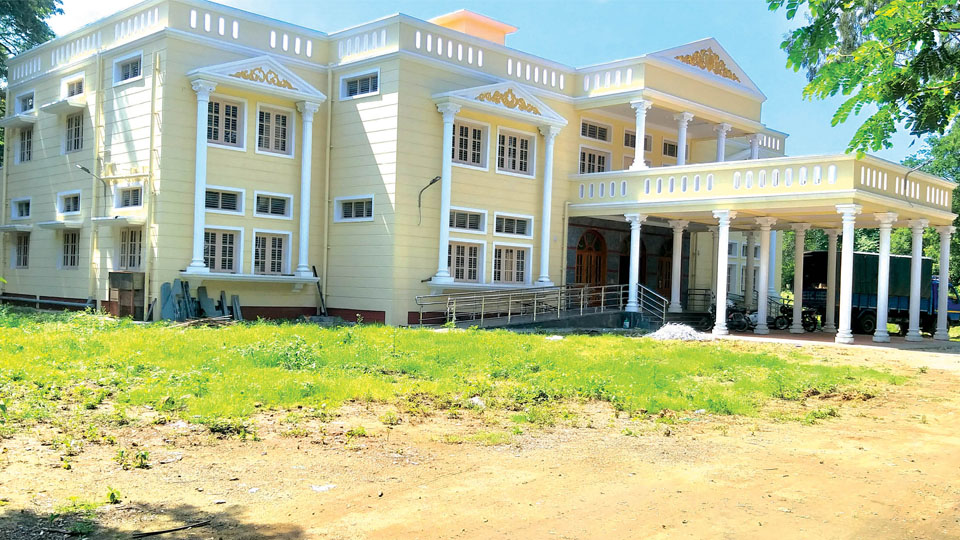 Mysore/Mysuru: More than a year after it was constructed, the new Central Library at People’s Park close to Sub-Urban Bus Stand in the city, will be inaugurated by District Minister S.T. Somashekar on Sept. 18 at 10 am.

Although the building was constructed over a year ago, its inauguration did not take place due to several reasons and the outbreak of COVID-19 in March only added to the delay. Now, the date has finally come, with the New Library all set for inauguration tomorrow.

The new Library is said to be a boon for students preparing for Civil Services and other competitive exams and also to other readers of all ages.

The building has been built on a 340×400 ft. space in People’s Park premises, at a cost of Rs. 499.30 lakh (Rs. 4.993 crore). The building, which has a floor area of 1,809 sq. mts, has several sections including an exclusive section for physically and visually challenged and women.

The building also has separate chambers for Library Department Director and Chief Librarian, a Mini-Conference Hall, Technical Section, Office Rooms, Record Room, Stationary Room and an open Mini-Auditorium. The Library Department has also provided facilities for release of new books at the building at a reasonable fee.

Co-operation and District in-Charge Minister S.T. Somashekar will be in Mysuru on Sept. 18 and 19.

Tomorrow at 9.30 am, the Minister will take part in the ‘guddali puja’ for reconstruction of 1,240 mts long road, 600 mts Double Road widening and asphalting works taken up at a cost of Rs. 3.10 crore at Kumbarakoppal coming under Chamaraja Constituency. After the People’s Park Library inaugural programme, he will leave for Chamarajanagar.

At 5 pm, he will be holding a meeting with the Mysuru DC in connection with Dasara celebrations.

On Sept. 19 at 10.30 am, he will attend the felicitation programme organised for Corona Warriors TV and Newspaper photographers and videographers at Vidyashankara Kalyana Mantapa near Gun                             House Circle and return to Bengaluru at 12 noon.