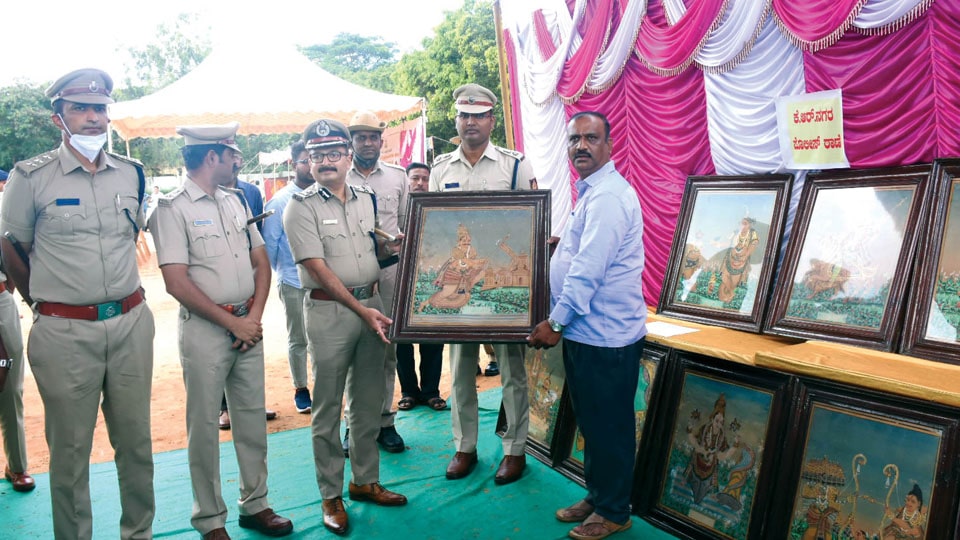 Mysore/Mysuru: The Mysuru District Police held a property parade pertaining to the recovery of stolen properties at the District Armed Reserve (DAR) Grounds in Jyothinagar here this morning and have handed over a few properties after the owners produced the documents pertaining to their valuables.

Addressing media persons, Superintendent of Police (SP) R. Chethan said that the Police of Hunsur Sub-Division, Mysuru Rural Sub-Division and Nanjangud Sub-Division had registered various cases and had recovered stolen properties out of which stolen properties in 72 cases (5 dacoity cases, 8 extortions, 18 house burglaries, 38 petty robberies including bike lifting and three cheating cases) were handed over to the owners.

Continuing, the SP said that District Police of the above three Sub-Divisions, from January

2021 till date had registered a total of 145 cases — 43 murder cases (23 charge-sheeted), 22 chain snatching cases, out of which 13 cases were solved and gold ornaments worth Rs. 16.72 lakh recovered, 9 dacoity cases, out of which 7 were solved and valuables worth Rs. 52 lakh recovered, 11 cheating cases and 65 kidnapping cases (31 charge-sheeted) — out of which recovered stolen properties in 72 cases worth Rs. 1,62,76,229 was handed over to the owners after obtaining permission from the Court. The recovered properties which included car, two-wheelers, goods auto, gold jewellery and 10 antique photos were handed over to the owners by IGP (Southern Range) Pravin Madhukar Pawar at the property parade.

Also, 82 Police personnel were given Appreciation Certificates and cash prizes, for their role in solving the cases and recovering stolen valuables.

Speaking about a unique case, SP Chethan said that 10 antique photos having high value were stolen from Srirama Temple and a Government library at Chandagala village in K.R. Nagar taluk.

The owner of the antique photos did not know that pure gold was used in making the photos and it had high value for it. After registering a case, the Police, who began their investigation, found that the burglars had commenced an online bidding process and the Cops in a bid to trace the burglars and arrest them, posed themselves as customers and took part in the online bidding.

After they bid the highest price for the antique photos, the Cops reached the place mentioned by the accused to collect the photos and arrested them.