Home » News » Dog, with its legs tied and left to die on the road, rescued 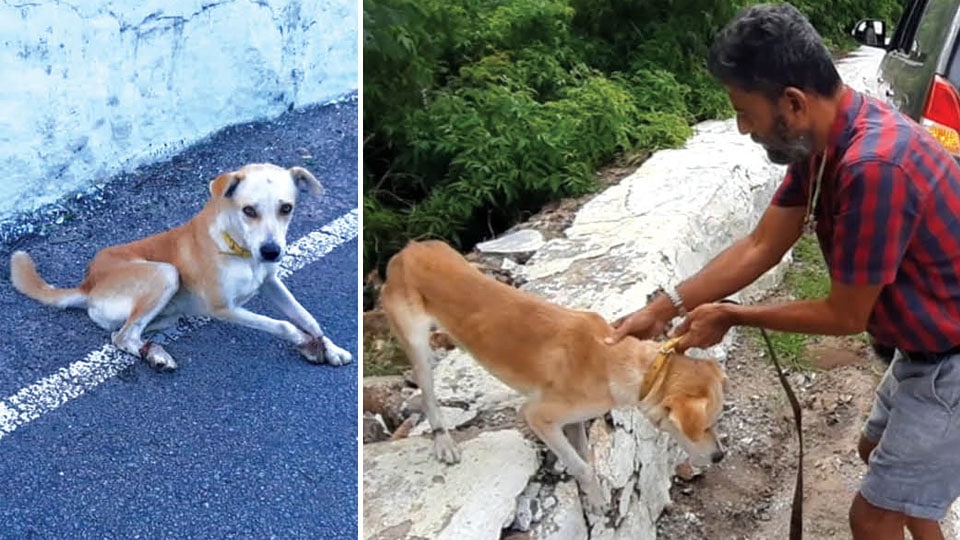 Dog, with its legs tied and left to die on the road, rescued

Mysuru: A dog whose all four legs had been tightly tied and left on the road to die has been saved in city.

The abandoned dog was fortunately rescued by a Good Samaritan and the canine has now been adopted and medical treatment is being provided.

Ajit Thandur, a resident of city, spotted the canine whose legs were tied and was abandoned on the Chamundi Hill Road while on his regular jog on Wednesday.

Speaking to Star of Mysore this morning, he said that he was surprised to see the dog on the busy stretch. “I tried to shoo it away but  it did not move. Sensing something amiss, I went near the dog only to discover that all its four legs were tightly tied and that is why it could not move. I immediately ran up to the watchman of a house nearby and borrowed a blade and cut the ropes from the dog’s legs and requested the    watchman to keep an eye on the dog while I go and get my vehicle,” he said.

Ajit said when he returned to the spot with his car to take the dog, he found it missing. “The dog was gone when I came back. Obviously the watchman had not bothered to keep an eye. I then started searching for it along the road and finally, found him exhausted and limping,” he said.

Ajit revealed that the tightly bound strings had cut into the dog’s skin and he was in real pain and fear. “Also, it had injuries all over its body so I lifted the dog and made it sit in the boot of my vehicle and took him home,” he said.

Later Ajit Thandur posted the photos of the dog and wrote about the incident on his runners group on social media when one of his running buddies expressed her willingness to take care of the dog.

Ajit informed SOM that the dog, baptised ‘Lucky,’ has been treated by a Vet and will be spending the rest of his days running free at his friend’s factory grounds.

For now it remains a mystery why anyone would be so cruel as to tie up a helpless animal and abandon it on the road.

The Mysuru unit of People For Animals (PFA) has over 150 dogs ready for adoption at its centre in SBM Layout, Bogadi. PFA is a non-profit organisation which provides shelter for sick and abandoned animals.

“We try to place all adoptable animals in homes. The dogs, puppies, cats and kittens are de-wormed, vaccinated and tested before being put up for adoption. We are doing this service since the last nine years and we have rescued many   abandoned pets and have provided treatment and shelter at our centre. We welcome people to adopt the animals and make this world a better place for the voiceless creatures,” Savitha said.

ONE COMMENT ON THIS POST To “Dog, with its legs tied and left to die on the road, rescued”