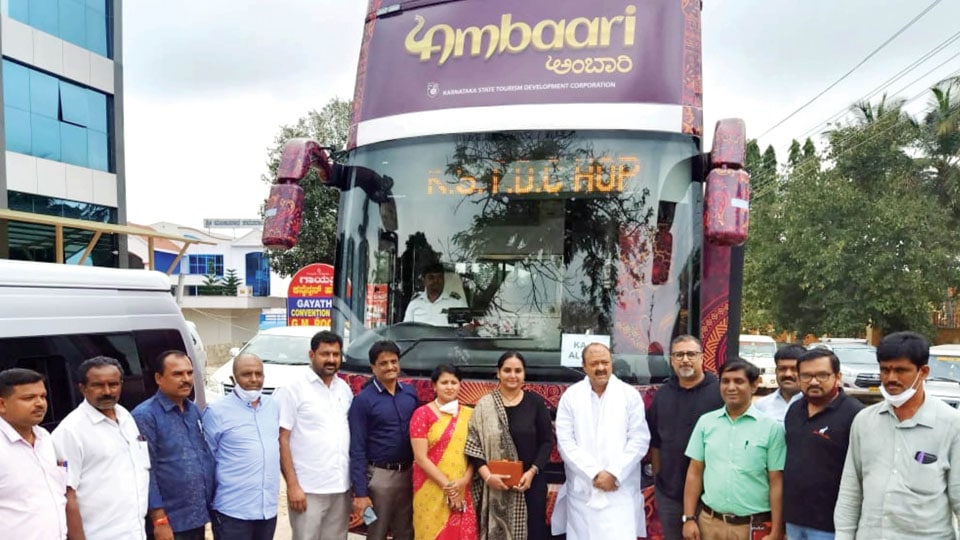 Visiting Srirangapatna in ‘Ambaari’, a rooftop open double-decker bus along with a team on Thursday, Shruthi, who has made her name in Kannada cinema, said that Srirangapatna is a hub of tourism and plans will be chalked out to take tourists around in the same ‘Ambaari’.

“This place is known for its tourism potential and when I was acting in Kannada films, most of my shootings took place in Srirangapatna, Mysuru and surrounding areas including Balamuri, Karighatta, Mahadevapura and Gosaighat where there are more than 250 scenic spots. Moreover, the historical Mysuru Dasara first began in Srirangapatna. I will strive to make this place a major tourist attraction,” she said.

Earlier ‘Ambaari’ was limited to carry tourists in and around Mysuru. At present the bus is stationed idle at KSTDC Office premises on JLB Road and it takes tourists on ride only during Dasara. Now the bus will travel to Srirangapatna from Mysuru and it will proceed to many places of tourist interest in and around Srirangapatna and Mysuru.

“Usually tourists who come to Mysuru will not miss Srirangapatna and usually they travel in public transport. I am sure that there will be many takers if ‘Ambaari’ operates to Srirangapatna. A detailed plan, tour timings and other logistics along with a rate card will be prepared after Sankranti festival,” she added.

“Year-round cultural festivals will be held in Srirangapatna and I have discussed the feasibility of this with officers,” she said and directed the officers to table a proposal before the Government to refurbish the abandoned Tourism Department building near Sri Ranganathaswamy Temple.

READ ALSO  One killed, five injured as car topples and falls into canal

She visited the place where the sound and light show is held, Ranganathaswamy Temple, Snana Ghatta, Sopaanakatte, Aane Kote Bagilu and other places of tourist interest.

Horticulture Minister K.C. Narayanagowda, who was there on a separate visit, met Shruthi and posed for a photograph in front of the ‘Ambaari.’ Later both of them visited Chandravana Ashrama on the outskirts of Srirangapatna and took the blessings of Sri Trinethramahantha Shivayogi Swamiji. Both Narayanagowda and Shruthi were felicitated at the Ashrama.