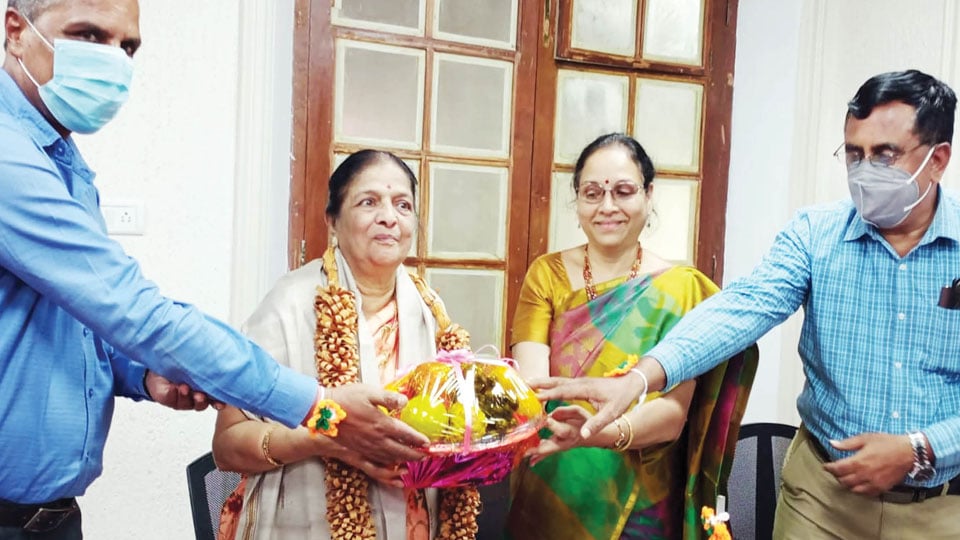 Mysore/Mysuru: Can there be a better souvenir for keepsake than personalised sheets of Postage Stamps of India Post with your own photo?

Mysuru-based veteran Hindustani singer, art critic and writer Dr. Manik A.V. Bengeri was in for a surprise when she received a set of stamps printed with her photo as a memento at the valedictory function of the Hindi Fortnight celebrations organised by Chief Postmaster General’s Office, Official Language Department, Bengaluru,  where she was invited as the chief guest.

The Central Government Offices  celebrate Official Language Month or a Fortnight or a Week along with several competitions in the month of September.  Similarly, the Chief Postmaster General’s Office too celebrated Hindi Fortnight under the guidance of Mohan Choudhary, AD(OL), O/o CPMG, Karnataka Circle, from Sept.14 to 28 with support from Chief Postmaster General (CPMG) Sharda Sampath.

Dr. Manik Bengeri read out her poem in Hindi, wishing a peaceful living for all and also distributed prizes to the winners of various contests along with other dignitaries.

Sharda Sampath honoured the chief guest with a shawl, sandalwood garland, a flower pot and memento of stamps. The valedictory coincided  with the inauguration of a mini auditorium.

Sharda Sampath, in her keynote address, stressed on the importance of Official Language as a link language.  She recalled that Dr. Manik  Bengeri had conducted Hindi workshops in the Office of Superintendent of Posts, Yadavagiri and also at the Postal Training Centre (PTC) in Nazarbad, Mysuru, three decades ago when she (Sharda) was the Director (Principal) of PTC and Sampath Kumar was Superintendent of Yadavagiri Post Office.