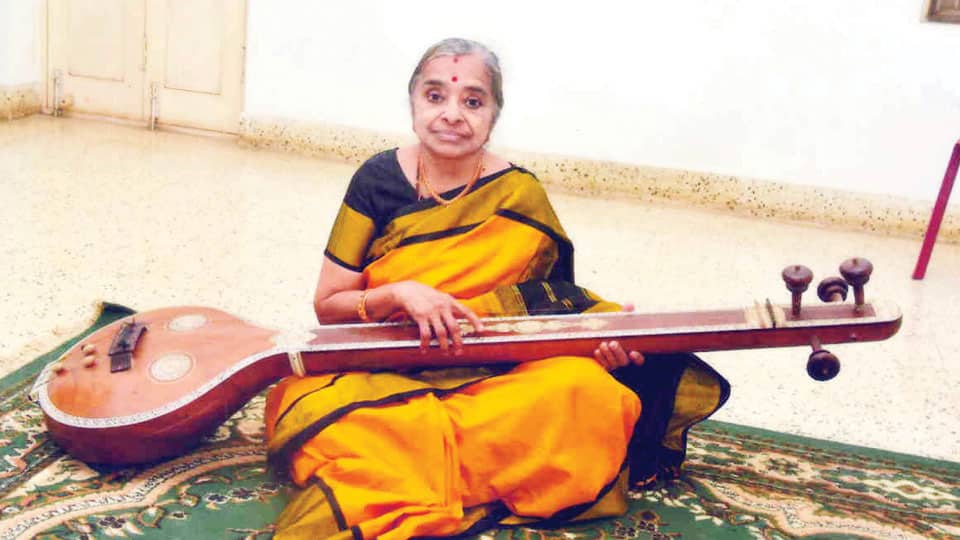 The Karnataka Ganakala Parishat (Musicians Association) has unanimously elected Dr. R.N. Sreelatha, the well-known Classical Karnatak Musician of Mysuru and Managing Trustee of Shruthimanjari Foundation, as the President of 51st Senior Musicians State-level Conference to be held from Nov. 16 to 20 at PATTI Auditorium, Sri Rama Mandira, N.R. Colony, Bengaluru. Dr. Sreelatha will conduct the deliberations of the Conference on all five days. She will be awarded ‘Ganakala Bhushana’ on Nov. 20 by the chief guest Vishweshwara Bhat, Chief Editor, Vishwavani Kannada Daily, at the valedictory function.

Speaking to Star of Mysore this morning, Dr. Sreelatha expressed her happiness on being unanimously elected as the President of the 51st Senior Musicians State-level Conference in Bengaluru and for ‘Ganakala Bhushana’ title.

“It is a real honour for any musician to be recognised by a Music Academy itself and is definitely a milestone in my life,” she said with pride.

Dr. R.N. Sreelatha, an academic as well as a performer, was born in a traditional Classical Music family of famous music village of Rudrapatna in Hassan district on June 4, 1952, to Vid. R.K. Narayanaswamy and Savitramma.

She is an ‘A-Top’ Grade artiste of All India Radio and Doordarshan. She was a Member of Karnataka Sangeetha Nritya Academy (Government of Karnataka) in 2017-2019.

She is a retd. Principal and Professor of Vocal Music (Karnatak) at University College of Fine Arts, University of Mysore. She has been performing in the field of music for the last 55 years.

Concerts experience: Dr. Sreelatha has performed at the Mysore Palace Durbar Hall, Mysuru and in Madras at The Music Academy, Mylapore Fine Arts, Mudra, Nadasudha, Kapali Fine Arts, Indian Fine Arts Society and for Doordarshan Chennai, besides many other Festivals.

She has performed widely in Karnataka and also in Mumbai, Bengaluru, Kolkata and Andhra Pradesh besides other venues in India.   She toured Malaysia and Singapore in 1999 and was invited by Sri Venkateswara Temple, Pittsburgh, USA, in 2002 and 2003 to teach Karnatak Vocal Music.

J. Srinivasan, Secretary, Board of Directors, Sri Venkateshwara Temple, in his letter to the University of Mysore, wrote: “Only those teachers whose performance is commendable are invited twice. During her assignment this summer, she continued to impress all of us and earn our respect with her scholarship, flawless conduct and teaching skills in imparting music to students of different ages and level of proficiency.”

Dr. Sreelatha gave a concert and conducted workshop on Dasara Padagalu in Melbourne – 2017 and 2019. She has given lecture-demonstrations on ‘Manodharma Sangeetha’ at Karnataka Ganakala Parishat, Bengaluru and ‘Varnas of Veena Kuppayyar’ at Vijaya College of Music, Bengaluru, ‘Music of Veena Kuppayyar Compositions’ at Kerala University, Trivandrum. She has been contributing to ‘Tillana’, a music monthly of Ganabharathi, Mysuru.

Dr. Sreelatha is the Managing Trustee of Shruthimanjari Foundation, an exclusive institution for promoting Classical Music since 24 years. National Open School invited her to frame the syllabus for Karnatak Music in December, 2002.

She has penned 15 books on Classical Music which is useful to all music learners up to graduation and one translation work of Sangeetha Saramrutha, published by Karnataka Ganakala Parishat, Bengaluru in 2020.

Awards and Honours: A tamboora was presented to her by Vidwan Dr. M. D. Ramanathan in appreciation of five first prizes she won at Indian Fine Arts Society, Madras. In the music competitions, hosted by The Music Academy, Chennai, she got nine first prizes in 1972-73.