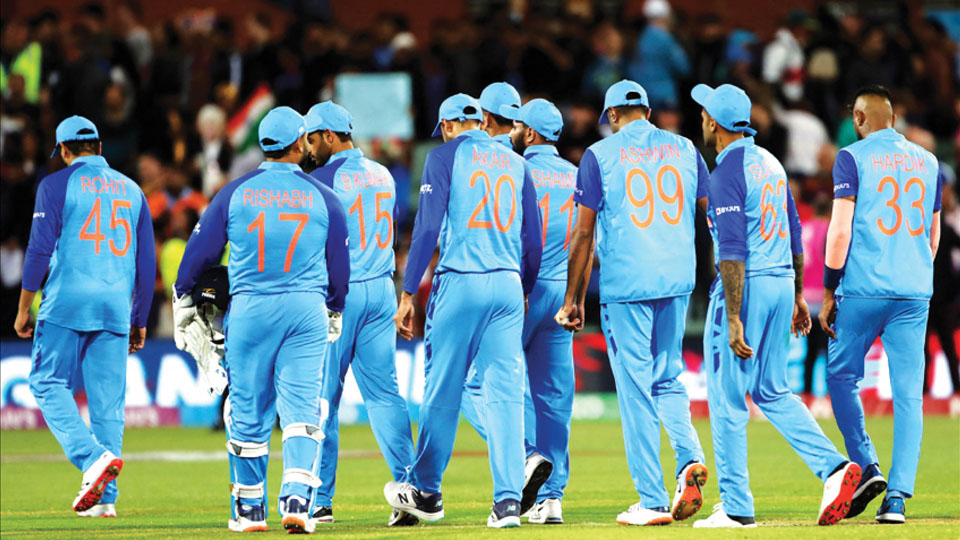 as Englishmen hammer ‘Men in Blue’ out of the tourney

Gloom of the Graveyard’ engulfed 1.35 billion Indians and fans across the world as our boys failed to hold the nerves in an important/ crucial encounter and threw away the match in abject surrender.

In lighter vein, we can only surmise that our boys pleased the Police Officers in Birmingham and Leicester.

In an exhibition of masterclass, openers Jos Buttler (80 at 163 strike rate) and Alex Hales (86 at 182) went ‘Hammer and Tongs’ from the 1st over to script an unbroken partnership of 170 to humiliate India.

Hearty congratulations to England on their massive victory. They proceed to Melbourne Cricket Grounds to play the finals against  Pakistan on Sunday. Best to both the teams. Good contest is what we look forward to.

T20 is a format where a combination of skill and risk taking works wonders. Strike rates of the top order determines the course of a match. As skipper Jos Buttler put it in the post match interview, he and Alex Hales could belt it out because he relied on team’s depth in batting. A ten-wicket victory in 16 overs chasing 168 is a great psychological advantage they carry into the finals. Best to the Engishmen on Sunday.

On a hard and dry surface, Jos Buttler called it right and chose to bowl. Gloom set in as K.L. Rahul yet again got out with an awkward fishing attempt; a nothing shot; a sign of his diffidence in big games. The adverse impact of KLR’s dismissal was evident in skipper Rohit Sharma as he got out trying to accelerate. Thanks to some brilliant batting by Virat Kohli (50 at 125 strike rate) and Hardik Pandya (63 at 191), we could set a decent target of 168 at 8.45 strike rate.

Though not a daunting target, it was defendable provided our bowlers had stuck to line and length in the first few overs to restrict the Englishmen through early wickets. But Bhuvneshwar Kumar, Arshdeep Singh, Mohammed Shami and Hardik Pandya were all wayward and leaked runs heavily.

Surprisingly, well-flighted deliveries (sporadic though) caused anxiety in both Buttler and Hales. But both Axar Patel and Ashwin failed to watch and exploit their psyche as they too leaked runs heavily, bowling more of flat trajectory.

Across tournaments, fact is that our seamers have been very inconsistent. Whereas they bowled superbly against Pakistan and South Africa, mediocrity was writ large against the English.

While analysing the journey in this ICC T20 World Cup, we need to admit that it was never rosy. In the preliminaries, victories against Pakistan and Bangladesh were ‘Touch and Go’. Defeat to South Africa was ridiculous. All meaning that the management and the selectors have a lot to work on. They should be brave to ask a few to step aside and restructure the team. Novelty is the key and it needs guts.