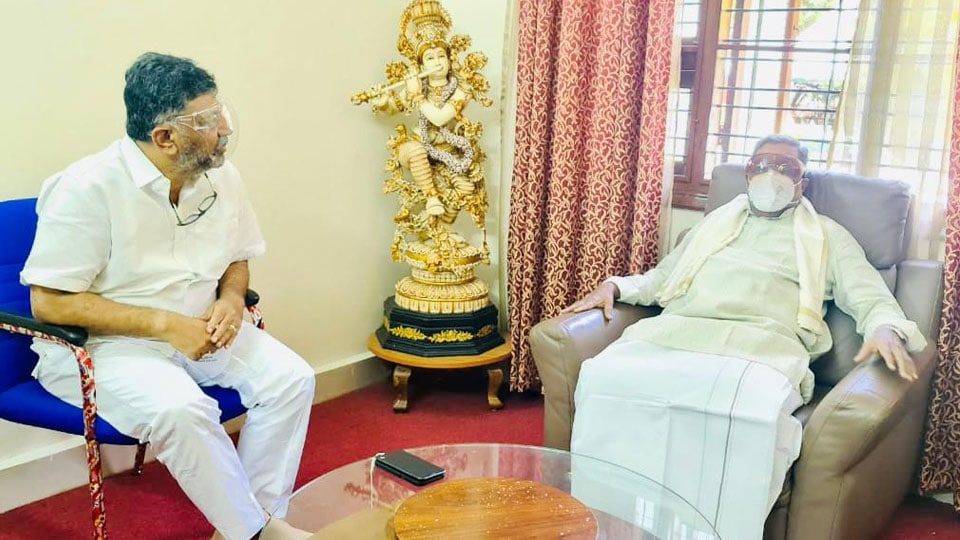 Bengaluru: Back from Manipal Hospital where he was undergoing treatment for minor illness, Leader of the Opposition Siddharamaiah has demanded an independent probe into the ‘land scam’ and ‘land mafia’ in Mysuru whose role is suspected to be the root cause to the public spat between IAS Officers Rohini Sindhuri (former Deputy Commissioner) and Shilpa Nag (former MCC Commissioner) amidst the thick of COVID-19 pandemic.

Training his guns on Mysuru-Kodagu MP Pratap Simha, the former CM said, “Pratap Simha and former Minister and K.R. Nagar JD(S) MLA S.R. Mahesh have a major role in the goings on and the subsequent transfers. In fact, it was Simha who brought a discord between the two IAS Officers,” he alleged.

“Earlier, Simha was in favour of Sindhuri, but he opposed her after some time. These leaders are the main reason behind the tussle between these two IAS Officers,” he said.

Blaming Cooperation Minister S.T. Somashekar, who is also the Mysuru District Minister, for escalation of the dispute over administrative matters between two IAS Officers, Siddharamaiah asked who permitted the IAS Officer to hold a press conference.

“There is no administration. This is why the tussle has come out in the open. Transfer is not the solution. Stern action must be taken for the public spat and the press conference. More important, the Government must order probe into the land mafia that is involved in the entire episode. Sindhuri herself has said that the reason for her transfer was an investigation she wanted to launch into a land scam. This has to be investigated,” he demanded.

“The BJP wanted Shilpa Nag to be the Mysuru DC and the leaders instigated Shilpa Nag to come out in open to vent her ire against Rohini Sindhuri. It is unfortunate that MP Pratap Simha, being from the ruling party, has publicly chided Rohini Sindhuri many times. Now everything is before the public and they are intelligent and cannot be hoodwinked,” Siddharamaiah said.

“Elected representatives must work together with Officers, especially in the time of such a pandemic of this scale. The MLAs and MPs must work for the people and it is not right to go against public sentiments. In this case, Pratap Simha should have worked to bring in cordiality between officers.

Sadly, he interfered in every aspect of the District Administration and instigated one IAS Officer against the other,” he added.