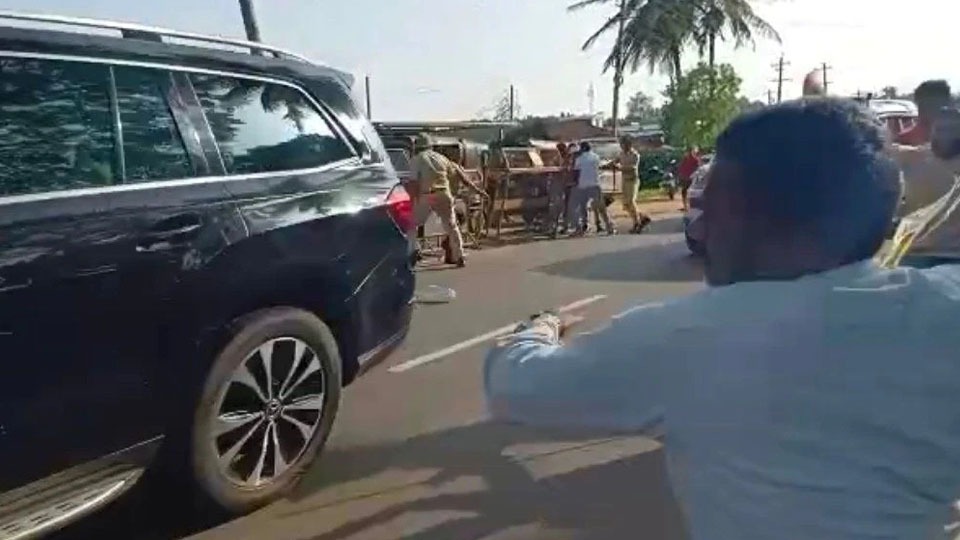 Madikeri: Even as hurling of eggs at the car of Opposition Leader and former Chief Minister Siddharamaiah has snowballed into a huge controversy and the incident hitting national headlines, a high-level probe has begun into the incident.

The probe has commenced following a Government Order. Chamarajanagar Additional SP Sundarraj has been appointed to head the probe, according to highly placed sources.

As part of the probe, a Special Police team, which has arrived at Guddehosur in Somwarpet Taluk of Kodagu District, where the incident took place on Aug.18, has begun collecting video footages captured in CCTV cameras, press reports and other such evidences.

In the meantime, the mudslinging between the ruling BJP and the Opposition Congress over the political affiliation of prime accused Sampath has continued, with both parties blaming each other for the egg attack incident.

While senior Congress leader of Kodagu B.A. Jivijaya has vehemently denied that Sampath is his supporter, the ruling BJP says that the accused is well-known in Congress circles. Jivijaya said that Sampath is associated with BJP and had sought the support of Madikeri MLA Appachu Ranjan for getting Government contracts. Sampath has also taken part in many RSS, VHP and other Hindu Organisations’ rallies, Jivijaya claimed and accused the BJP of making baseless charges against the Congress.

Prohibitory orders in Kodagu from tomorrow till Aug. 27

Meanwhile, taking note of the Congress’ plans of Madikeri Chalo as part of laying siege to the SP’s Office  on Aug. 26, the Kodagu District Administration, as a precautionary measure,  has enforced prohibitory orders in the whole of Kodagu district from 6 am on Aug. 24 till 8 pm on Aug. 27.

Following reports that over a lakh people, including those from neighbouring districts are expected to take part in the Madikeri Chalo on Aug. 26 and also as the BJP has planned to organise a rally at Madikeri’s Gandhi Maidan the same day (Aug. 26), the District Administration has enforced prohibitory orders for ensuring maintenance of Law and Order.

Barring already fixed weddings and such other public functions, no other meetings, functions and public gatherings will be allowed on these dates.

Likewise, bursting of crackers, taking out rallies, black flag demonstrations and such other demonstrations, making provocative speeches etc.,   have been completely banned when the prohibitory orders are in place.