Home » Columns » Epigraphs before our eyes 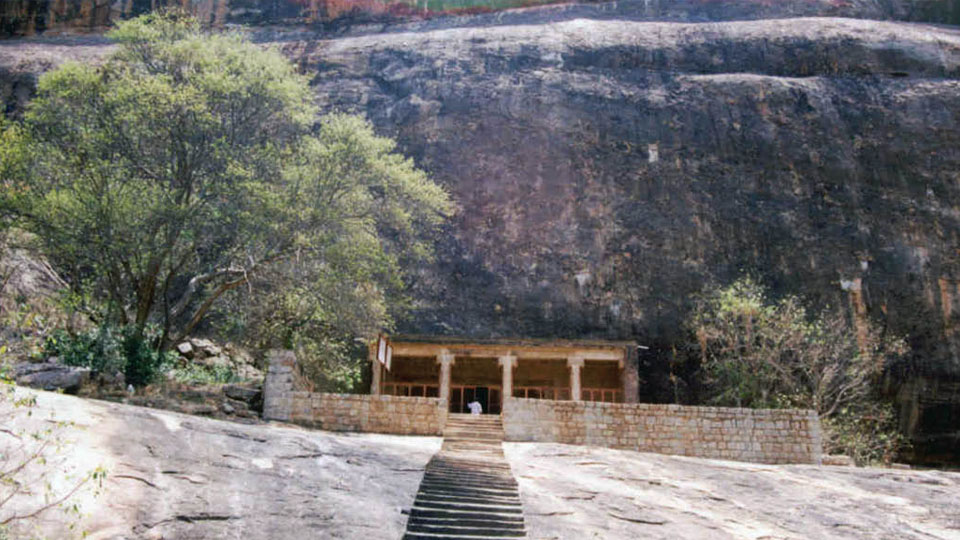 Epigraphs before our eyes

Recently I had the good fortune of sharing the dais with Yaduveer Krishnadatta Chamaraja Wadiyar, the scion of Mysore royal family. The occasion was the inauguration of Epigraphical photo gallery, arranged by the office of the Director of Epigraphy which is located at Puratattva Bhavan near Sankranti Circle, Hebbal Second Stage.

In fact, it is a good opportunity for our culture-minded youngsters to visit this office and learn about our great heritage. The whole credit should go to the present Director Dr. Muniratnam Reddy, popularly known as Muni which means a sage. He is wedded to epigraphy or inscriptions and in this sense, he is a real Muni.

Yaduveer had worn a suit befitting the occasion and had diamond earrings, a symbol of royalty. He had vermillion (Kumkum) on his forehead – an evidence for his love for tradition. I released the brochure on Epigraphical photo gallery. Then Yaduveer spoke about epigraphy as an important source for understanding the history and culture of India.

The audience was amazed at his knowledge of our heritage in general and epigraphy in particular. He referred to James Prinsep who was the first to take interest in reading Brahmi script. The romance of this decipherment reads like a novel in Indian Cultural history. Prinsep noticed some bi-lingual and bi-scriptal coins with Greek and Brahmi Writings (legends) and thus the whole vista of epigraphy became an open book.

From then onwards thousands of inscriptions have been deciphered and published by this Department. I had written a book — Kannada Lipiya Ugama Mattu Vikasa (Origin and Evolution of Kannada Script) which has seen over eight editions and has bagged many awards. Incidentally it is the first publication of Kuvempu Institute of Kannada Studies, University of Mysore.

The Epigraphy branch was bifurcated and Arabic and Persian which had headquarters at Nagpur had illustrious scholars like Z.A. Desai, N. M. Ganam, M. F. Khan, M. I. Qureshi and others. The most important contribution of the two branches was the publication Epigraphia Indica with Sanskrit, Kannada, Tamil, Telugu, Malayalam inscriptions and Persian epigraphy.

These volumes are a store house of knowledge on Indian epigraphy. Perhaps no other state or country has had the distinction with the sole exception of Lewis Rice who edited Epigraphia Carnatica volumes and I had the good fortune of re-editing and reprinting these volumes with help of some scholars like H. M. Nagaraja Rao, Krishnaveni and others. This series is still continuing in Mysore University. 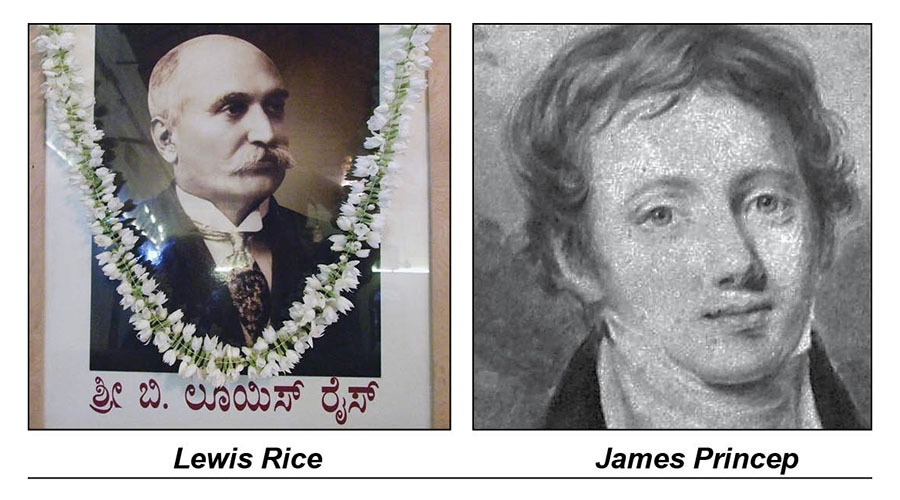 Now, let me take our readers through the corridors of epigraphy as exhibited in the Puratattva Bhavan. The first inscription is from District Gorakhpur of Uttar Pradesh and is dated third Century B.C. followed among others by Girnar inscription of Asoka of Third Century B.C. which refers to patronage to Buddhism and tolerance towards other religions. 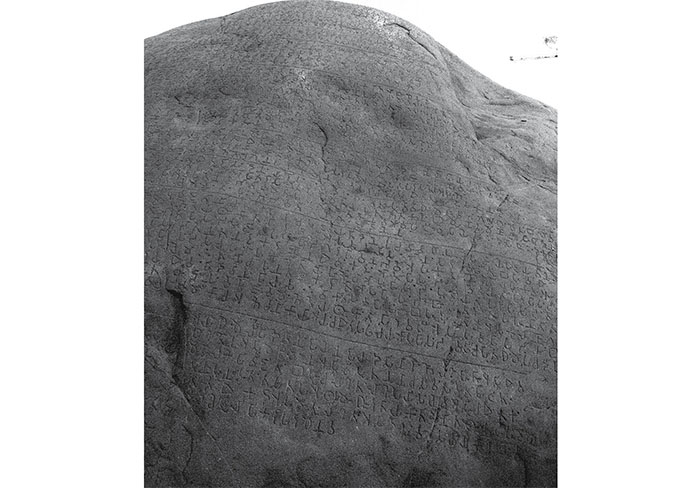 We are yet to achieve this in full measure even in our own times. Asoka had installed many inscriptions in Karnataka and perhaps the highest number. It shows that Ashoka had a special fascination for Karnataka (Vanavasi) from which place he sent Buddhist missionaries to many countries.

There is a cave inscription at Sittananavasal in Tamil Nadu which belongs to first century and is written in Tamil-Brahmi. The next inscription is that of Nahapana of Kshatrapa dynasty belonging to 119-24 A.D. Hurishka’s (Kuhsana dynasty) inscription at Mathura is a mixture of Sanskrit and Prakrit and refers to a gift to hundred Brahmans.

Sittananavasal has many caves which are famous for inscriptions because of many reasons. It is located in Pudukottai district of Tamil Nadu. It mentions Eramainadu. This word is important. Eramai means buffalo. The present name of Mysuru is generally explained as Mahishanauru or Mahishasuranauru meaning the town named after the demon or rakshasa Mahisha. He had the face of a buffalo. Thus Mahishasuranauru in course of time became Mysuru anglicized as Mysore.

According to mythology, demon Mahishasura was tormenting the people, particularly those who were performing Vedic sacrifices. The gods requested the supreme god to free them from this demon. It is believed that goddess Chamundi or Chamundeswari killed this demon. Of course there is also another theory according to which Maisunadu is mentioned in an inscription of early centuries of Christian era Mahishanadu is also mentioned as a town from where Buddhists missionaries were sent for the propagation of Dharma.

Another important inscription at Banavasi in (North Karnataka) is that of a Chutu king which is carved on the border of a Naga stone. Samudragupta’s Allahabad pillar inscription is most significant because it mentions the various wars fought by this great king and hence he is known as Indian Napoleon. But for this inscription the greatness of the king would not have been known to us. Halmidi inscription in the village Halmidi in Hassan is considered as the earliest Kannada / Sanskrit inscription in Karnataka. It is dated 405-435 AD. This is the importance of the inscription. Kadamba Ravivarma’s Gundnapur inscription in Uttara Kannada district is famous for the box-headed characters. Chola Parntaka’ Suttaramerur inscription is extremely important for understanding municipal elections, the procedures of which are more or less being followed even now.