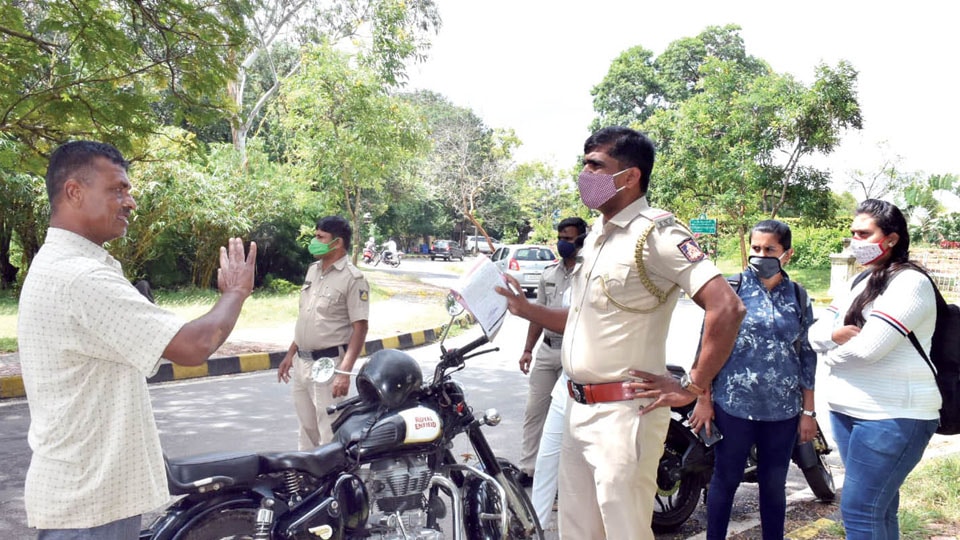 Face mask mandatory even if full face helmet is worn

Mysore/Mysuru: Traffic Police have collected fine from a two-wheeler rider for not wearing face mask despite him arguing with the Cops that he was wearing a full face helmet.

The incident took place at Shanthala Theatre Signal Lights junction in city recently and the video of which has gone viral on social media.

The youth, who was riding a Bajaj Discover bike by wearing a full face helmet, stopped at the Shanthala Traffic Signal Lights as the red light was on.

The woman Constable then asks the rider to come to the roadside and informs her higher authorities who were present there.

The Police official, who was present at the spot, informed the rider that it is mandatory to wear face mask even if full face helmet is worn and asked the rider to pay the fine.

The rider then pleaded with the Police that he has no money and showed them his empty wallet, but the Police told him that he has to pay the fine or else they would not allow him to go.

The rider then called his friend over the phone, who came to the spot and paid the fine following which the rider was allowed to go.