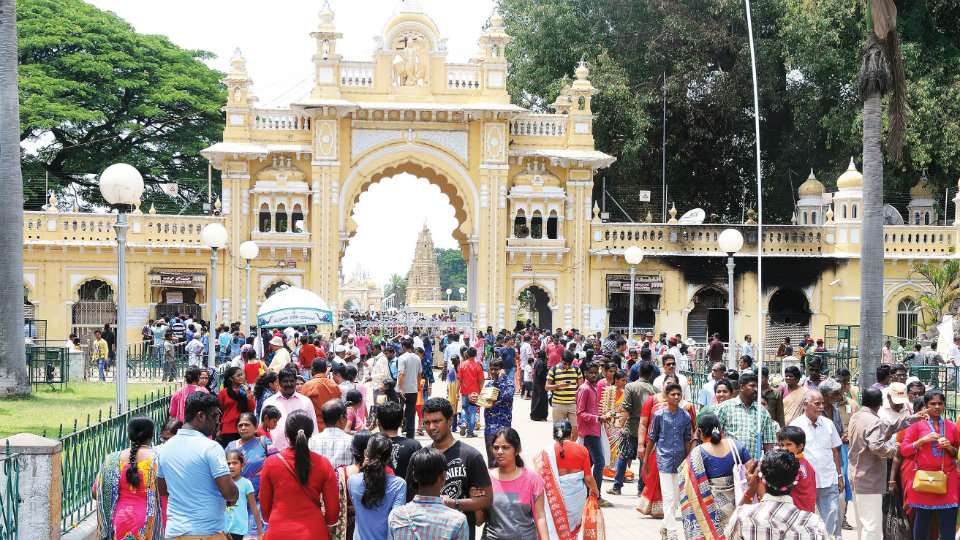 Was perusing a recent report on fake tourist guides. Are you surprised? I am not. This kind of thuggery  may be a recent phenomenon in Mysuru but has been going on for years in North India.

Twenty years back, I used to be General Manager of Lodhi Hotel. I was expecting a guest from my home town who was alighting at Nizamuddin Station, just 10 minutes from the Hotel. On enquiry, I was told that the train had arrived on time, but  even after an hour, our guest had not reached home. After about an hour, our guest called up from some hotel in the vicinity. I was surprised as I told him that we were waiting for him from past one hour. He then narrated his ordeal and how he was hijacked by the auto driver to  a hotel.

On nearing the Lodhi Hotel, the driver told him that the hotel was on strike and he should stay in some other hotel nearby. The driver then rang up a number and spoke. He then handed over the phone to my relative saying that the man on the other line was the receptionist of Lodhi and he can confirm from him about the strike. Our  guest panicked and was taken to a hotel nearby and was asked to pay full advance for all three days of his stay at Delhi.

The auto driver conveniently took his 20 percent commission and vanished. Later on I sent my Security Manager and threatened of Police action. My guest was then refunded two days advance. This kind of thuggery is prevalent in Airport Hotel booking counters too !

Now,  this form of fraud has surfaced in Mysuru. As we are importing all North Indian cultures into our way of life, we should accept this too. From time immemorial, South Indian marriages was a solemn boring affair. A North Indian marriage would be loud, full of fun, with mehendi, dances etc., and now it has become a part of our marriage functions too.

Recently I received  a video of a groom and bride dancing in a marriage function at Udupi, a traditional town ! Ten years back could you think of any marriage down South, where cocktails are served except in a Kodava marriage? Now this North Indian  culture has become an integral part of our elite marriages.

READ ALSO  No illumination of Palace

Another bad influence imported from North is the percentage of commission paid to the guides, drivers and travel agents by the shop-keepers. A whopping 30 percent. What is the net result? All the tourists coming in to the town gets fleeced royally.

In the nineties, in Varanasi,  the largest hotel in town was “Clarks” with about 180 rooms.  They also owned a farm house and had converted that into a shopping centre called  “Bagheecha.” Every tourist coming to town was taken there for shopping of Banarasi sarees and silk carpets of Kashmir. The whole tourist trade including hotels, travel agents, guides both Indian and foreigners were involved  in this racket of fleecing the poor tourist. Just like Mysuru, 80 percent of the materials made in Varanasi are fakes, sold as genuine Banarasis. Taxi drivers and rickshaw drivers too made handsome commissions and were paid even if the customer did not buy anything !

Top International Travel Agents like Sita and tci sent in their reps to collect the commission money every 6 months. A smooth racket, polished and perfected with time and now is slowly making its way into South. I recollect in the nineties, the shops just used to pay a nominal commission of ten percent.

Just one look at the number  of shops which have come up on Chamundi Hill road? All private brands flaunting the name of Cauvery, the Government brand, spelled in different ways, Kaveri, Cavery, etc., to confuse  the unsuspecting tourist. Every silk material is palmed off as Mysore Silk. It is not that every guest gets fooled. Some come prepared and some have knowledge of the material. They go to the real factory outlets and buy  whatever they want.

Top class guides are even paid advances at the start of the year  by the large shop-keepers to ensure that they bring the customers to the designated shops. Have you ever wondered how so many silk shops opposite the Zoo survive? I have never seen any locals go there. These shops are meant for tourists only.

A similar racket exists even now in Bengaluru where every Tom, Dick and Harry small time travel agents put up a board “itdc approved.” We tried to get it removed with the help of Police several times but within months it would reappear. The net result was that the poor customer booking his bus ticket would always think that the Travel Agent had the Government of India approval for running his bus services, which was not the case.

To conclude, is there a solution in place to eradicate this racket? The answer is a clear NO. Greed and corruption is so rampant that this system has come to stay. Everyone is involved. Travel agents, guides, drivers and in some cases hotels. Who is the loser? The poor tourist,  both domestic and international, who have to shell out huge amounts of money to buy fakes. Sometimes at exorbitant prices.

2 COMMENTS ON THIS POST To “Fake Guides and Travel Agents”