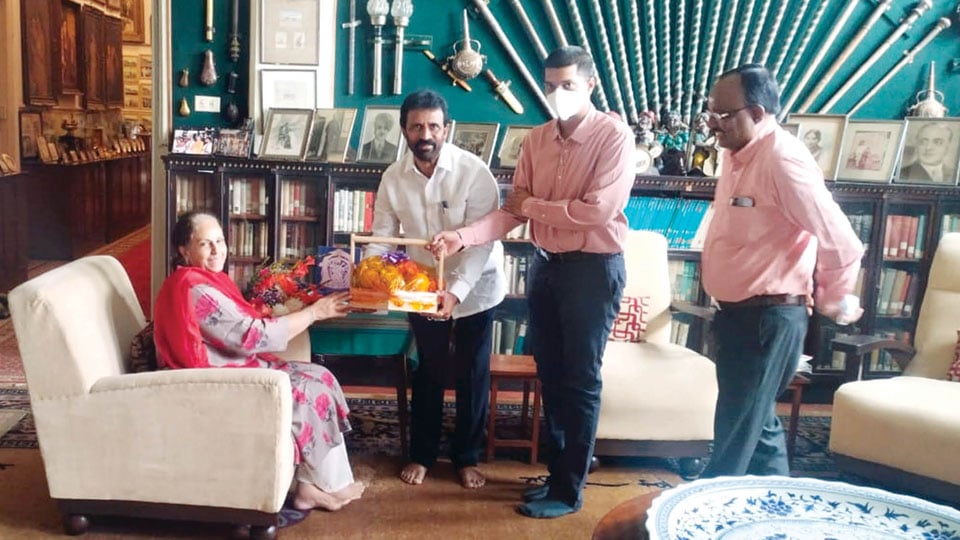 Mysore/Mysuru: Amidst a standoff between the Mysuru City Corporation (MCC), State Government and the erstwhile Mysore royal family over the fate of Devaraja Market and Lansdowne Building, an amicable solution was drawn last evening when Chamaraja MLA L. Nagendra and MCC Commissioner G. Lakshmikantha Reddy called on member of the royal family Pramoda Devi Wadiyar.

The meeting resolved that the royal family would re-consult heritage experts and conservationists and a decision on the fate of the two heritage buildings would be conveyed to the MLA and the MCC Commissioner in a fortnight or 20 days. Also, Pramoda Devi has laid down a condition that until the conservationists are re-consulted, no decision must be taken on the two buildings.

Pramoda Devi Wadiyar and Yaduveer Krishnadatta Chamaraja Wadiyar were vocal about conserving the two structures built by the Wadiyars. They were critical of the Government and the MCC’s move to demolish and reconstruct the structures that form the soul of Mysuru city.

Yaduveer went a step ahead and took to streets demanding the heritage structures be restored to its original shape instead of demolishing and reconstructing. Hundreds of traders of Devaraja Market, who feared displacement and loss of livelihood, had rallied behind Yaduveer.

Expressing their ire over the proposed demolition, the royal family members had offered to take up the restoration through their own heritage wing which has restored the interiors of Jayachamarajendra Art Gallery at Jaganmohan Palace and the team that is renovating the Rajendra Vilas Palace atop the Chamundi Hill. The family had repeatedly stated that by demolition and reconstruction, heritage is being taken away from the buildings.

Speaking to Star of Mysore this morning, MLA Nagendra said that Pramoda Devi was apprised of the decisions taken by the various task forces and expert committees.

“We discussed in detail about safety aspects too as portions of the buildings have already collapsed and more damage will be caused if the buildings are retained as-is,” he said.

After listening to the MLA and MCC Commissioner, Pramoda Devi Wadiyar told them that in the past too she had discussed with conservationists who had opined that the buildings can be restored.

“She told us that she would re-consult the experts and give her opinion on how best the two buildings could be put to public use. We informed her that they will put on hold any decision on the fate of the two buildings until her decision is conveyed. However, the final decision will be taken by the Government,” MLA Nagendra told SOM.

Mysore Palace Board Deputy Director T.S. Subramanya and MCC officials were present during the meeting.

ONE COMMENT ON THIS POST To “Fate of Devaraja Market, Lansdowne Building: Amicable solution in sight amidst standoff”