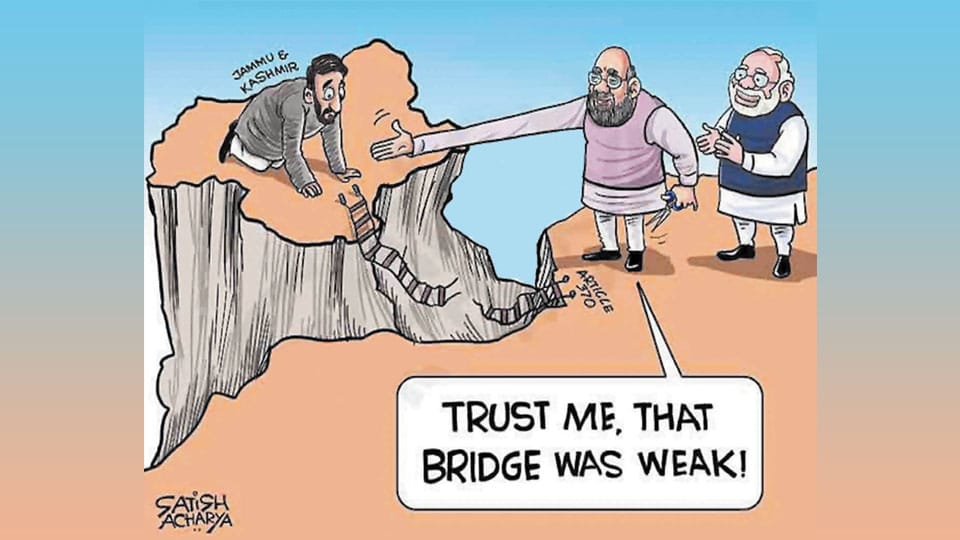 Finally, from Kashmir to Cape Comorin

Kashmir is no more the special one. But it remains so for the Congress Party and Pakistan. And why not? Kashmir has been used and misused for politics both within India and Pakistan.

After the special status to Kashmir was revoked, a headline in a Pakistani newspaper read, “Madman on the loose” with the photograph of Prime Minister Narendra Modi under it.  But it is said, “Insanity is doing the same thing over and over again expecting a different result.” So it is not Narendra Modi who is insane, but the leaders on both sides who did the same thing over and over again for over six decades in Kashmir expecting a different result.

Now, a Government has come along that has tried something new. Will it succeed in bringing Kashmir to  mainstream India? Time will tell. Will it give the people of Kashmir prosperity? Again there are no guarantees. But may be we can appreciate the fact that a new strategy is being attempted.

As for the people clamouring over the “technicality of how it was done,”  indeed the manner in which it was done was Machiavellian. What other way was there? You were given six decades to come up with a solution that was not “crafty.” What did you do?

Now the same people who couldn’t find a solution nor let others try a new solution are cautioning, “There will be blood bath in the Valley.”

Former CM of Kashmir Farooq Abdulla in a state of breathlessness and urgency said he had broken the door and walked out of his house where he was under house arrest and added with a melodramatic tone, “My State is being burnt. My people are being executed in jails!”

Now, one would imagine a man with such intense feelings for his “burning”  State and people would be on the street sitting on fast-unto-death but Farooq Abdulla broke from his house arrest and went for lunch in a restaurant and spoke to the Press!

Yes, indeed Farooq Abdulla’s father and Omar Abdulla’s grandfather, Sheikh Abdulla was a leader who was secular and never called for freedom of Kashmir from India. He was very much in tune with the idea of India.

Ramachandra Guha in his scholarly book, Indian After Gandhi, notes: On the first anniversary of Indian Independence, he (Sheikh Abdulla) sent a letter to a popular Madras magazine called Swatantra. He wrote “Through the pages of ‘Swatantra’ I wish to send my message of fraternity to the people of the South. Far back in the annals of India, the South and the North met in the land of Kashmir. The great Shankaracharya came to Kashmir to spread his dynamic philosophy but here he was defeated in argument by a Panditani (a female Pandit or wife of a Pandit). This gave rise to the peculiar philosophy of Kashmir — Shaivism. A memorial to the great Shankaracharya in Kashmir stands prominent on the top of the Shankaracharya Hill in Srinagar; it is a temple containing the murti of Shiva.

We in Kashmir expect that we shall continue to receive support and sympathy from the people of the South and that some day when we describe the extent of our country we shall use the phrase ‘From Kashmir to Cape Comorin’.”

The Madras magazine in turn responded by printing a lyrical paean (a song of praise) to the union of Kashmir with India, which said, “The blood of many a brave Tamilian, Andhra, Malayalee and Coorgi has soaked into the fertile soil of Kashmir and mixed with the blood of the Kashmir patriots cementing forever the unity of the North and the South.” Sheikh Abdulla read this message out at the end of his Eid festival speech in Srinagar in 1948.

In fact, it was the Hindu King, Maharaja Hari Singh, who wanted to be Independent. Maharaja Hari Singh had grand plans of turning Kashmir into Switzerland, a non-aligned, neutral nation; a paradise tucked away between snow-capped mountains. But when the violent tribesmen armed by Pakistani army came to invade Kashmir, he          acceded to India.

So yes, Sheikh Abdulla was for India but he also got his State special treatment that India did NOT have to oblige. But at that time, in the context of war, may be it was something the Government of that day wanted to “try”, that is why they kept it under temporary provisions.

While most Congress leaders and people against the scrapping of special status to Kashmir are worried about what will happen to Kashmiris, did any of them worry about what has been happening to Ladakhis?

People who are opposed to the scrapping of this special status to Kashmir should ask, is it not “unsecular” when a Muslim majority discriminates against a Buddhist minority?  Is it not unfair when Valmikis (Dalits) brought to Jammu and Kashmir in 1957 by the State Government are still not eligible for a permanent residency, job reservation and a house? Isn’t it unfair when a Kashmiri woman loses all her inheritance because she marries a non-Kashmiri? Aren’t all these human rights violations? Then why are they against a Bill that removes these violations?

Many say why not ask what Kashmiris want? Well, Edward Luce, the senior British journalist from Financial Times wrote how in 2005 at PM Manmohan Singh’s rally, “The crowd was NOT yelling freedom or Pakistan or Islam, as they might have done in the past. Instead they were shouting jobs and repeatedly chanted                                   remove unemployment.”

Meanwhile, did anyone ask what the Ladakhis want? After all, they are part of Jammu and Kashmir too.

Ladakh has been asking for a Union Territory status for a long time. They even floated a political party called Ladakh Union Territory Front in 2002. Three years later in 2005 they swept the Ladakh Autonomous Hill Development Council election. Then they again requested the Congress Government at the Centre to make Ladakh a Union Territory. They were not entertained.

In 2010, they merged with the BJP. Nine years later, in 2019, BJP has delivered their demand. And in doing so they have also fulfilled Sheikh Abdulla’s wish — India now is truly from “Kashmir to Cape Comorin.”

3 COMMENTS ON THIS POST To “Finally, from Kashmir to Cape Comorin”