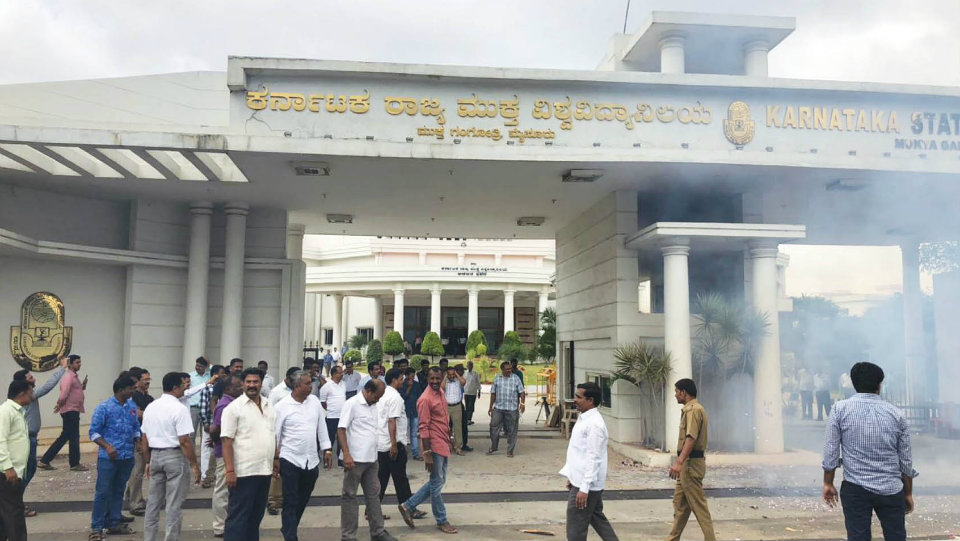 Mysuru: Providing a major relief to lakhs of students who depend on distant learning, the University Grants Commission (UGC) has finally granted recognition to Karnataka State Open University (KSOU). The UGC had issued a public notice dated 16.6.2015 informing the students not to seek admissions in KSOU since it is de-recognised with retrospective effect from the academic year 2013-2014.

In an official note issued by UGC’s Distance Education Bureau yesterday, the KSOU has been granted permission to run courses from the 2018-2019 to 2022-2023 academic year. The move comes after there were several deliberations that KSOU officials had with the UGC authorities earlier this week.

However, the UGC order does not speak about the recognition to courses that were offered in the past and where students are struggling to get their marks card validated. What is still a matter of concern is the fate of old students who had enrolled in courses with KSOU.

It may be recalled here that MLA S.A. Ramdas along with KSOU Vice-Chancellor Prof. D. Shivalingaiah met UGC Chairman Prof. D.P. Singh at New Delhi recently and had held discussions with him and also provided documents.

KSOU’s affiliation was being rejected over the last few years and had a Herculean task to ensure they get it. Prof. Shivalingaiah said, “We have got an official letter that will tell us which course to start and all other details.”

“For this, we had to submit a 900-page report on the University in three volumes. The UGC had changed the policy and we could not get the affiliation last year. The cycle was closed by June 2018. Then the new cycle began and online applications were invited and we applied with this 900-page report of the Open University,” Prof. Shivalingaiah added.

PAST MISTAKES TO BE AVOIDED

“It was a traumatic and no-income period since 16.6.2015 as the recognition was withdrawn. We were struggling for our day-to-day survival. What was tragic is that the students were put to severe inconvenience and their future was at stake. The KSOU, Karnataka Government, Higher Education Department and all the elected representatives of Mysuru must be thanked for their sincere efforts to get back the recognition,” he said.

The Vice-Chancellor did not forget to add that henceforth, the KSOU will not violate any UGC orders. “In the past, there were many violations and we had to face such a situation. We will not repeat the mistakes as we have learnt our lessons in a hard way. We will follow the UGC rules and regulations religiously,” he said.

8 COMMENTS ON THIS POST To “Finally, UGC grants recognition to 17 courses offered by KSOU”