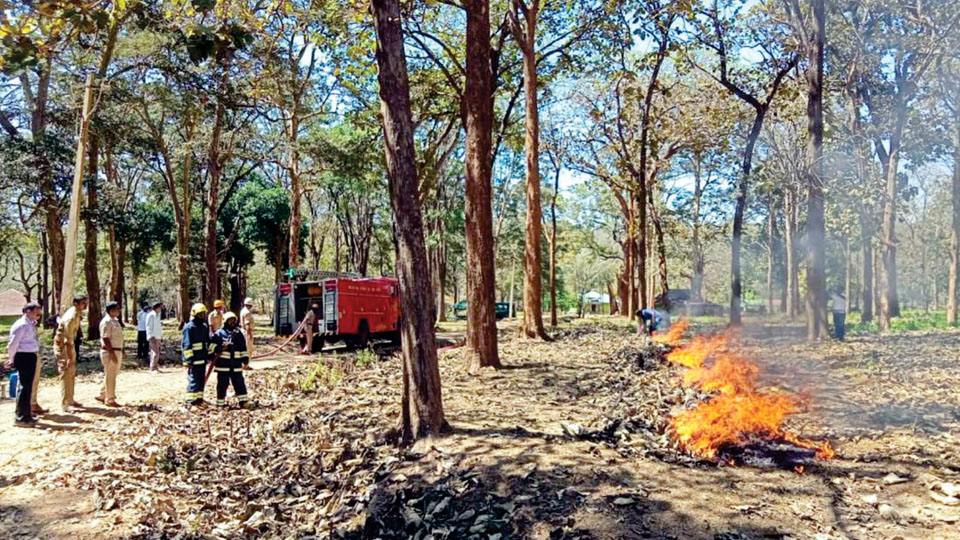 It is always better to take precautions rather than taking action after forest catches fire: District Forest Officer H. Raju

Hunsur: Forest staff deployed in forests to prevent or control fire should have sound knowledge about water source in forests, the direction of wind blowing and should have a map of the forest before taking up the job. Most importantly, it is always better to take precautions than taking action after forest catches fire, said District Forest Officer (DFO) H. Raju.

“Instead of taking action after forests catch fire, it is ideal to take precautions to prevent it and hence, the Forest staff should work to prevent fire incidents. In case of forest fire, the staff should have sound knowledge about extinguishing fire and necessary equipment should be kept handy and staff should know how to use the equipment,” DFO Raju said.

Meanwhile, the Fire and Emergency Services personnel conducted a demonstration to create awareness among the Forest staff about the methods used to extinguish forest fires and about the fire operation by the Fire Brigade.

DFO Raju said that in case of forest fire, first priority should be given to one’s safety and at the same time preventing fire from spreading should be taken care of.

Pointing out that those deployed to prevent forest fires should not smoke cigarettes or beedis, Raju said that the staff should not go against the wind to control fire. He further said that equipment such as sprayers and blowers should be kept available and immediately inform the Fire Brigade Station which would help the Fire staff to arrive with the fire extinguishing vehicle to the spot.

Pointing out that forest fire can spread in many ways, the DFO said that the first thing is to complete the fireline and added that necessary steps should be taken to make way for vehicles to reach the fire spot.

Along with the map of the forest, one should have information on the availability of water in forests and in case of small fire, sprayers and blowers should be used. In case water tankers cannot go to the spot, the Fire Brigade should use mini vehicles to reach the spot, he said.

Meanwhile, Nagarahole Assistant Conservator of Forests (ACF) Gopal said that Nagarahole Forest is spread across 843 sq km and is divided into eight ranges. Pointing out that firelines have been created on road borders in all eight ranges, the ACF said that 40 staff, along with enough support staff, have been deployed in every range.

Stating that a 6,000 litre capacity water tanker, four spraying machines, wood cutter and a separate vehicle with 20 staff to conduct beat have been deployed in each forest range, ACF Gopal said that two watch tower which are 50-60 ft. tall and eight normal towers in all eight ranges have been constructed.

The ACF also stated that four staff equipped with walkie-talkie have been deployed in each tower who are working 24 hours a day in shifts.