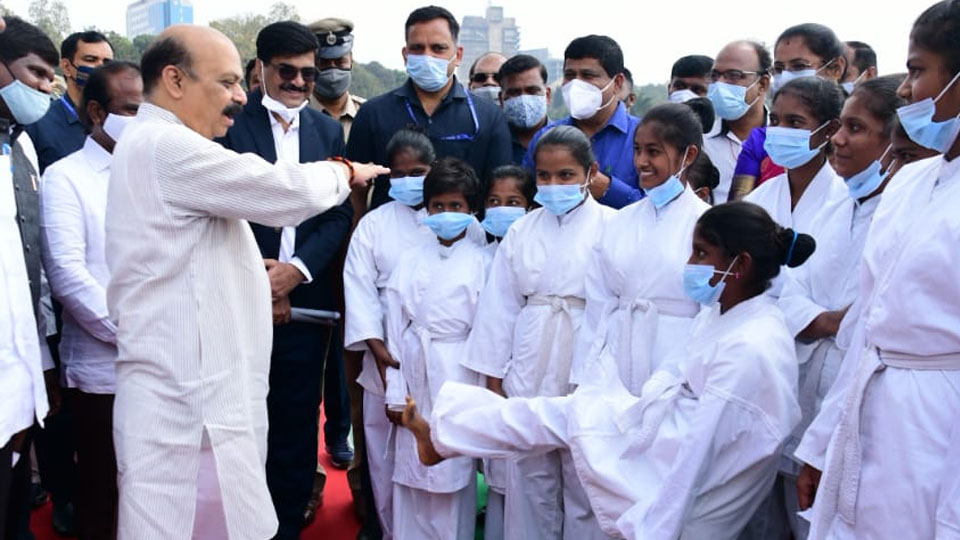 Girls get training in self-defence skills

Rogue elements can be taught a lesson if women are trained in self-defence: CM

Mysuru/Bengaluru: A complete self-defence training for post-matric girl students to ward off attackers and criminals will formally be inaugurated in Mysuru tomorrow. The training is already underway at post-matric girls hostels and the students have been trained for over a month.

Incidentally, yesterday in Bengaluru, launching the training organised by the Social Welfare Department, Chief Minister Basavaraj Bommai said that he has instructed the Home Department to use Police Training Schools to provide self-defence training for women.

“Many laws have been passed, programmes formulated and funds have been spent to stop harassment and atrocities on women. But there is a need for imparting self-defence training for them. The rogue and lumpen elements could be taught a lesson if women are trained in self-defence,” Bommai said, adding that the Departments of Law, Education, Home and Society should work together to ensure the safety and dignity of women.

“This programme should go on throughout the year. All the programmes would be integrated and a new programme would be implemented for women’s safety,” Bommai said.

An ambitious programme is being charted to provide self-defence training for 50,000 female students in Backward Classes and Social Welfare Department hostels. It has been aptly named after Onake Obavva, the name itself gives the strength to fight. Karnataka is proud of its legacy of such courageous women. Kittur Rani Chennamma, Belavadi Mallamma, Onake Obavva. They were more courageous than men, he said.

In Mysuru, over 5,178 girl students including 2,316 students from Social Welfare Department, 1,862 from Backward Classes Welfare Department and children from various residential hostels are being trained in karate and the training is being provided by experienced women karate trainers.

The training is provided twice a week with one hour duration and the entire students are covered every day. Rs. 500 is paid per student per session along with a travelling allowance of Rs. 100. Officials said that the timetable of the sessions have been adjusted to the academics and the sessions are held either before they go to classes or when they return, without hampering classroom learning.

Karate outfits are provided by the Departments and Rs. 500 per student has been set aside though quality materials actually cost anywhere between Rs. 900 and Rs. 1,000.

Obavva Art of Self-Defence Training will be formally inaugurated tomorrow (Feb. 8) at 10 am at the Pre-Matric Girls Hostel in V.V. Mohalla. This training programme is essential to all girl students and will boost their level of confidence and also help them effectively combat anti-social elements.

A dedicated team of 17 women karate instructors has been formed and they are providing training. We have ensured that there is no shortage of trainers and the sessions have been made mandatory for all students who study at various Government hostels.