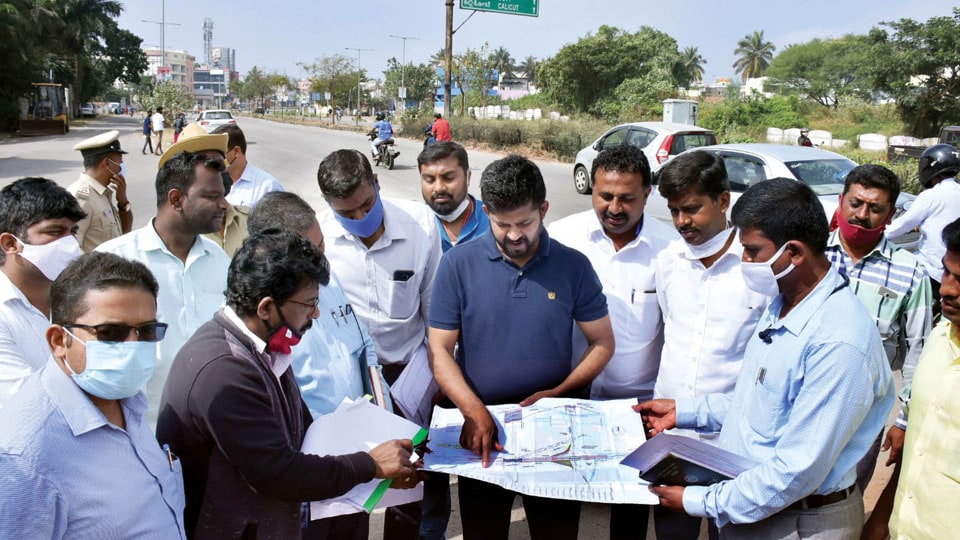 Mysore/Mysuru: After the first flyover in city on the Mysuru-Hunsur Highway near Hinkal, the city is all set to get one more flyover near the Hotel Royal Inn Junction, a meeting point of the Outer Ring Road (ORR) and KRS Road.

The junction sees heavy vehicular movement and is a major bottleneck as whoever visits Mysuru is sure to land up on the road at any given point of time. Often the road is a witness to bumper-to-bumper traffic as tourist movement is high. The road links to many industrial and residential areas like Hebbal, Metagalli and KRS Dam and also to the Bengaluru Road.

The busy stretch and the traffic bottleneck has given scope for another flyover in the junction and this morning, MP Pratap Simha inspected the stretch along with a team of officials from Mysuru City Corporation (MCC), Mysuru Urban Development Authority (MUDA), National Highways Authority of India (NHAI), Railways and Public Works Department (PWD).

A proposal and a Detailed Project Report (DPR) will be submitted to the Centre and the State Government to construct the flyover from Brigade Apartments, opposite Coastal Garden Hotel, till the District Hospital near Hotel Royal Inn Junction on the KRS Road. This flyover will be built on the lines of the flyover on Mysuru-Hunsur Highway near Hinkal, the MP said.

As per the preliminary estimates drawn up by officials, the project is likely to cost Rs. 41 crore and the NHAI is ready to contribute Rs. 10 crore. The rest of the funding will have to be shared by MCC, MUDA, Railways and the PWD. “The project cost might escalate after the preparation of the DPR and the approval is likely to be obtained in the next six to eight months,” the MP told reporters.

However, out of the four grade separators, only the Hunsur Road flyover has become a reality. The flyover that was proposed at KRS Road Junction faced a technical snag as the road descends too close to the Mysuru-Hassan Railway track and hence had to be dropped.

Now the flyover has again gained traction as the new alignment from Brigade Apartments opposite Coastal Garden Hotel till the District Hospital does not touch the Railway line.