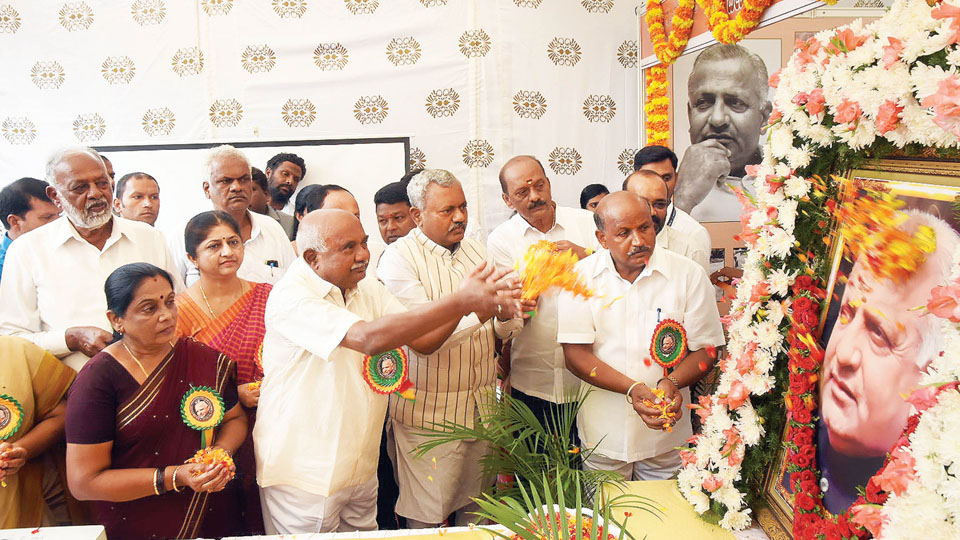 Speaking on the occasion, Somashekar said that Devaraj Urs, who ruled the State for almost eight years (1972-1980) was an exemplary Chief Minister who brought about a silent revolution in Karnataka by his various welfare measures aimed at the upliftment of the poor and downtrodden.

Pointing out that Urs, who was born at Kallahalli village in Hunsur taluk, studied in Mysuru and went on to become the Chief Minister, Somashekar said that Urs introduced ‘Uluvavanige Bhoomi’, a revolutionary initiative that was aimed at making the actual tiller the owner of the land, which benefited lakhs of landless labourers and poor farmers.

Noting that it was Urs who constituted SC/ST and OBC Commission for providing adequate reservation for Dalit and Backward communities, he said that Urs’ contributions for the welfare of the poor and overall growth of the State cannot be ever forgotten. “I was too delighted to get the sanction of the Government readily when the District Administration recommended the name of MLC A.H. Vishwanath, who was a staunch follower of Urs and who considers Urs as his political mentor and icon, for the District-level D. Devaraj Urs Award,” Somashekar said while recalling how Vishwanath used to explain the achievements of different Chief Ministers of the State when they stayed in Mumbai together for a fortnight, after over 17 MLAs from the Congress and JD(S) withdrew their support to the Coalition Government in 2019.

Highlighting the contributions of Vishwanath, Somashekar recalled how Vishwanath as the Co-op. Minister in the S.M. Krishna Govt., took the initiative for introducing unique ‘Yeshasvini’ Health Scheme that benefited lakhs of farmers. Bommai-led Government now will re-introduce this popular health scheme on Oct. 2 across the State marking Gandhi Jayanthi, he added.

Dist. Minister S.T. Somashekar also announced that a life-size statue of Devaraj Urs, who is a native of Mysuru, would come up at the new DC’s Office on Bannur Road in Siddarthanagar. It is estimated to cost Rs.92 lakh and preparations are on for start of works on the project, he added.

A.H. Vishwanath, who spoke after being conferred with D. Devaraj Urs Award, got emotional and said, he was at loss for words on being conferred with this prestigious award. Maintaining that this award was far more greater for him than a UN award, he said he was extremely thankful to all those who recommended his name for the award. “D. Devaraj Urs is my political guru right from the beginning and even now. I will always remain indebted to him for promoting me in politics since the late 1970s even as I practiced as a Lawyer at K.R. Nagar,” an emotional Vishwanath said adding that Urs was rightly called as the Champion of Backward Classes for all the services he rendered to the voiceless and oppressed sections of the society.

Basavaraj, a BCM Hostel student, drew the attraction of the gathering by painting a picture of Devaraj Urs at the spot in a short time, which was presented to Vishwanath.

Marking the birth anniversary, a three-day agricultural exhibition has been organised in which key Government Departments and a few Boards and Corporations are taking part. The expo has 25 stalls, featuring a variety of agri products and crop species, display and sale of handicrafts, home-made, handloom products and such other articles made by craftsmen and vocational tradesmen. The expo will be open to public till Aug. 22. The expo also features a photographic display of rare pictures and books pertaining to the late Chief Minister.