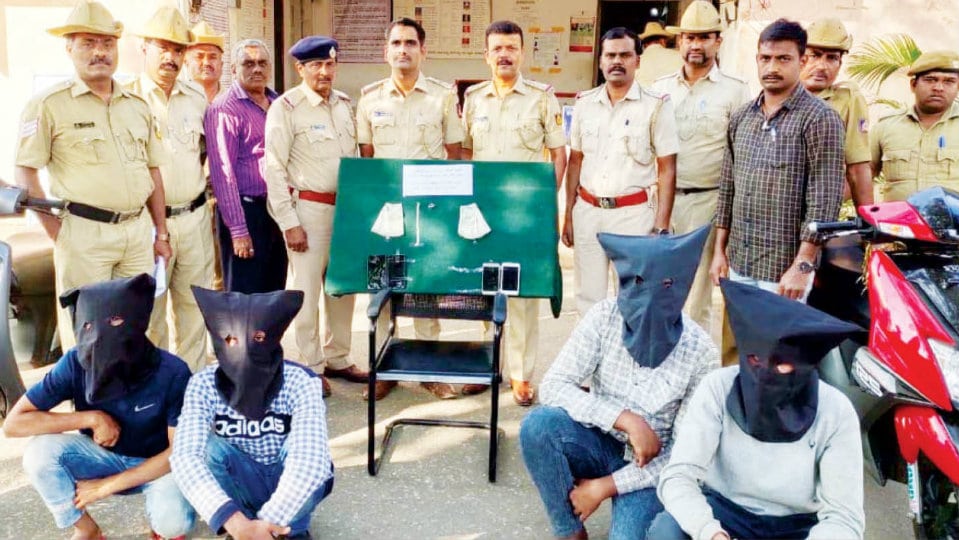 Srirangapatna: Srirangapatna Town Police have arrested four persons who had extorted money and valuables from a mini tipper vehicle driver on Jan. 22 after faking an accident and have recovered cash besides seizing two bikes and four cell phones, all worth about Rs.1.78 lakh from them.

The arrested are 21-year-old Imran of HUDCO Colony in Bannimantap in Mysuru, who is pursuing his second year BBM course, 25-year-old Mansoor of Sunni Chowk in Mandi Mohalla, Mysuru, 22-year-old Syed Afzal of Udayagiri and staying at Mandi Mohalla, Mysuru and 21-year-old Imran Ali Khan of Bannimantap near Bhuvaneshwari Kalyana Mantap and presently residing at Subashnagar 3rd Cross near Maramma Temple in Mysuru.

Details: On Jan. 22 at about 5.45 pm, one Sadiq of Kumbarakoppal in Pandavapura taluk, was driving his mini tipper (KA-39-D-9939) near Paschimavahini on Bengaluru-Mysuru Highway, when two persons, who came on a bike, overtook the mini tipper and forced Sadiq to stop claiming that he (Sadiq) had caused an accident by brushing the vehicle against them.

When Sadiq told them that he had not committed any accident and why they were lying, the two persons slapped Sadiq and took away Rs. 16,000 cash which he had kept in his pocket, snatched his silver bracelet and silver ring and fled from the spot following which Sadiq lodged a complaint at Srirangapatna Town Police Station.

Acting on a tip off, the Police team on Jan. 23 early morning arrived at Mysuru and took Syed Imran, Mansoor and Imran Ali Khan into custody. During interrogation, the three accused are said to have confessed of committing the crime along with Syed Afzal for partying.

They further revealed that while proceeding on the Cauvery River Bangara Doddi Canal near Srirangapatna to party, they saw a bike parked on the canal bund and when one of them tried to open the lock of the bike with a duplicate key, the bike owner, who came to the spot, questioned them but they (accused) hit him on the head with a big stone and made away with Rs. 500, which was in the victim’s pocket.

Bike owner Madhu of Srirangapatna has lodged a complaint at Srirangapatna Town Police Station, following which another case was registered against the accused. Based on the information provided by the accused, the Police have recovered Rs. 16,000 cash and 20 grams silver ornaments besides seizing two bikes and four cell phones used for the crime.