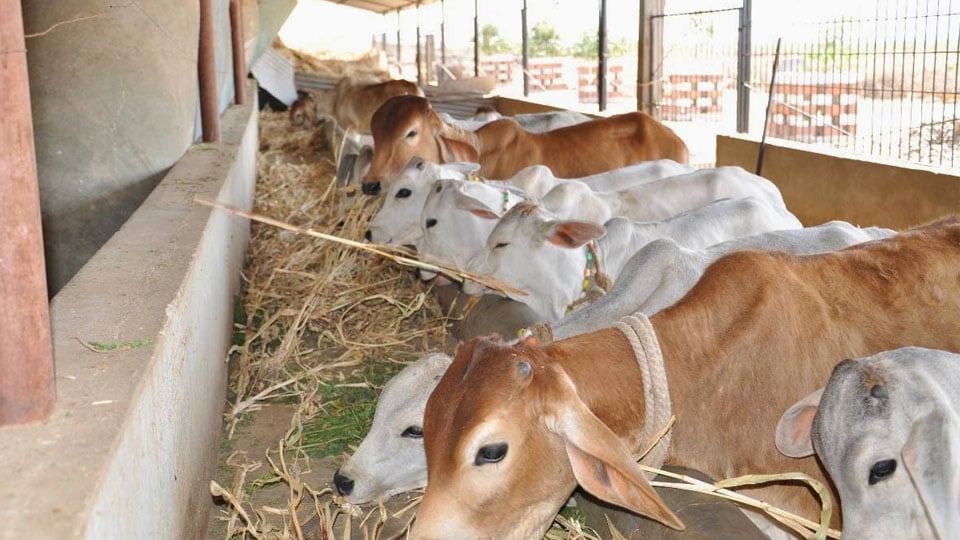 Goshalas to be set up at 25 Temples in State

Bengaluru:  Even as the Government is pushing for protection of cattle, the Muzrai Department has planned to set up 25 Goshalas in ‘A’ grade Temples of the state.

Announcing this at a press meet here yesterday, Muzrai Minister Kota Srinivas Poojary said Goshalas will be set up in 25 temples including Chamundi Hill temple in Mysuru, Sri Srikanteshwara temple in Nanjangud, Mookambika temple at Kollur and Banashankari temple in Bengaluru.

The Goshalas will be set up in 10-15 acre area belonging to the temples and the respective district administrations have been directed to identify land wherever temples do not have their own land, Poojary said.

Pointing out that it has been planned to shelter 100 to 200 cattle in every Goshala, Poojary said that Ramachandrapura Mutt has been doing yeoman service in the protection of cattle and  as such, the Government will consult the Mutt on the maintenance of Goshalas.

Highlighting the measures taken by the Government for safeguarding temple properties and prevention of pilferage of temple revenues, he said that IAS officer Rohini Sindhoori has been asked to submit a report in this regard.

Stating that the Government’s ambitious ‘Saptapadi’ mass marriage programme aimed at popularising simple marriages will be held at 100 prominent temples of the State on Apr. 26, Poojary said and added that the last date for registration is Mar. 27. So far, the Department has received 1,218 applications.

He further said that the Government has proposed to conduct another mass marriage programme on May 24.