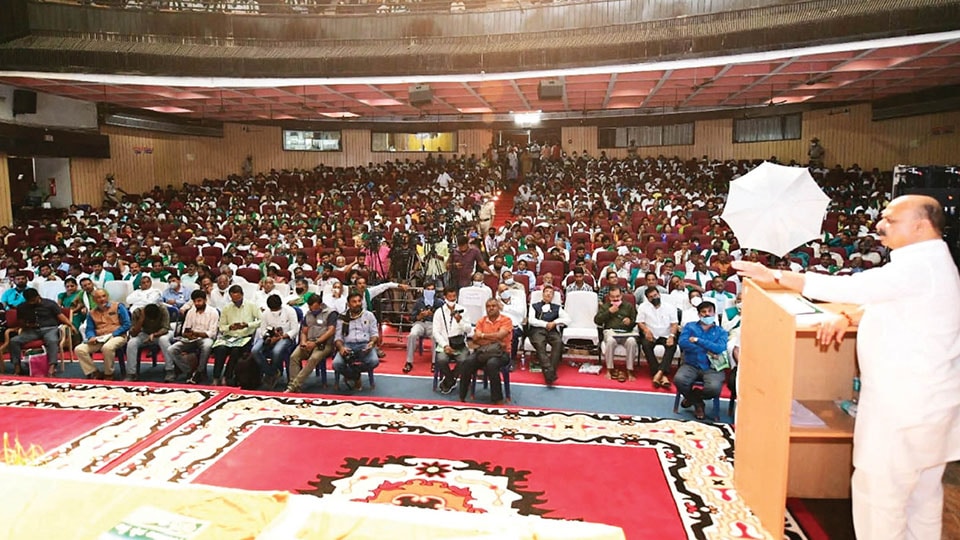 Mysore/Mysuru: Chief Minister Basavaraj Bommai said that the Government was mulling on forming an exclusive Directorate for enhancement of farmer income.

Asserting that the State Government has a lot of consideration for farmers, Bommai said that the Government always stands in solidarity with the farming community.

Maintaining that he has come here as a voice of the farming community, Bommai said that the Government was committed to find lasting solutions to farmer issues that have remained unresolved for long.

Noting that everyone should understand that all political parties belong to farmers and it is the farming community that is the backbone of every political party, the CM bemoaned that in spite of this fact, many farmer issues remain to be appropriately addressed even after 75 years of independence.

Pointing out that though we show interest in food production, we tend to forget about farmer welfare, Bommai said that it is very disappointing to note that farmers who fill up our food baskets, have an almost empty pocket.

Reiterating that the State Government was committed for doubling of farmers income as envisaged by the Centre, he said that the inputs provided  by Farmers’ Income Doubling Committee of the Centre is under study.

Stating that the scheme has helped 2.40 lakh children of farmers in their higher education, he said that the Government has extended this scheme to cover girl children studying at High Schools in rural areas too. The scheme is expected to benefit 5 lakh farmer children in a few more months, he added.

Suttur Mutt Seer Sri Shivarathri Deshikendra Swamiji, who graced the occasion, opined that committing suicide is not the solution for farmer problems.

Noting that farmers should not lose hope even in adverse situations, the Seer wanted the Government to announce appropriate compensation for crop loss occurred by natural disasters or due to the vagaries of nature. He called upon farmer organisations to shed differences and unite for the cause of farmers.

Senior Journalist H.R. Ranganath, in his address, opined that the Farmer Movement was limited. Stressing on the need for widening the horizons of the Farmer Movement, he called for an integrated approach for redressal of farmer issues.

Noting that climate change may pose a bigger threat for farming in the coming days, he said that farmers should take up cultivation in accordance with weather conditions and changing seasons.

Lauding farmer leader Kurubur Shanthakumar for his commitment towards the farming community, Ranganath said it is important to eradicate notions of distrust and reservations in farmer struggles.

Karnataka Sugarcane Growers Association President Kurubur Shanthakumar, who has completed 40 years in Farmer Movement, was conferred ‘Raitha Ratna’ title and felicitated along with his wife Padma on the occasion. Also, a  souvenir titled ‘Hasiru Honnu’ and a special issue titled ‘Raitha Dhwani’ were released marking the event.

Earlier, a seminar on farming and farmer issues took place, in which many farm experts delivered talks and interacted with the farmers.

Several activists, who have launched an indefinite stir in front of Rangayana seeking sacking of Rangayana Director Addanda C. Cariappa for his alleged promotion of Right-wing ideology, submitted a memorandum in this regard to CM Basavaraj Bommai on the occasion.

Referring to the re-opening of shut down sugar factories in Mysuru region, Chief Minister Basavaraj Bommai said that all preparations are underway for start of production at MySugar Factory in Mandya. Noting that he had held meeting with farmers and officials in this regard, the CM assured that sugarcane crushing will start in the factory in the coming season. Assuring that the Government will ensure that farmers are not meted out injustice in the fixation of FRP (Fair and Remunerative Price) for sugarcane, the CM said that he has directed the officials to submit a report regarding the stipulation of FRP.

Pointing out that the process is underway for handing over Srirama Sugar Factory at Chunchanakatte in K.R. Nagar taluk, Bommai said there has been a delay as technical problems have surfaced in the tender process. “I have directed the officials to  rectify the technical issues and take steps for commencement  of sugarcane crushing at the factory at the earliest,” he added.