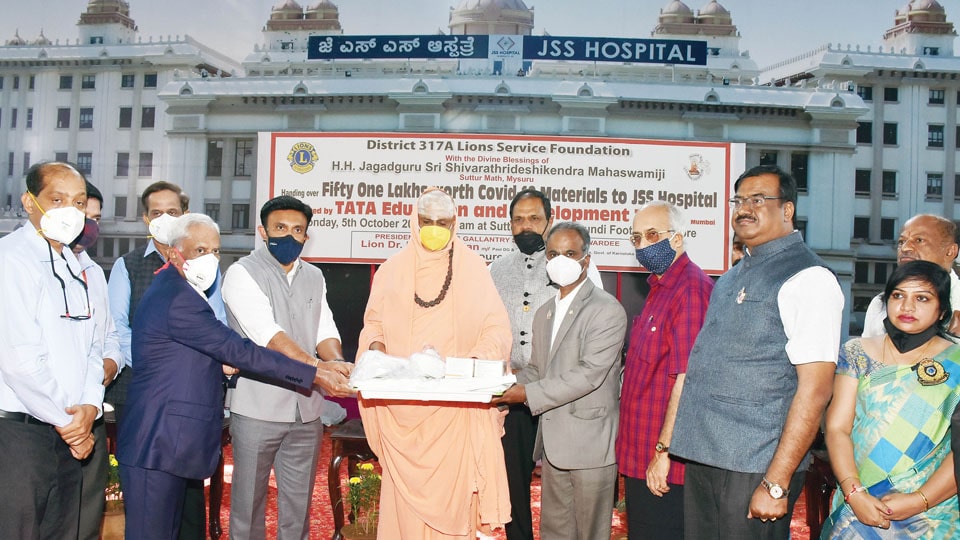 He was speaking at a function organised in connection with donation of Rs. 51 lakh worth COVID-19 materials and medical equipment to JSS Hospital by Tata Education and Development Trust through 371A Lions Service Foundation at Suttur Mutt here on Monday.

The Minister said in the initial days of COVID-19 the State did not have a single laboratory and now they have 147 labs where over a lakh people were being tested. The Corona positive cases may be more in Karnataka but the death rate here was 1.5 per cent to 1.6 per cent which was very much less when compared to the world’s average of 3.5 per cent to 3.6 per cent. Doctors and researchers around the globe were making honest efforts to find out a vaccine for COVID-19, he added.

Union Health Minister Dr. Harsh Vardhan has talked about supplying the vaccine to 25 million people. Though the vaccination was expected to be available by January next year, logistic is being worked out in reaching to the less immunity people to inoculate them. Priority will be given to people above 65 years of age, children below 10 years and those with lack of immunity, Dr. Sudhakar said.

He promised to hold talks with CM B.S. Yediyurappa regarding celebrating Dasara-2020 in simple manner. Suggestions given by medical and health experts will also be shared with the CM. Situation has called for awareness on COVID-19. The State Government is planning to request the Suttur Seer to give a message to the public on preventive steps. Need of the hour was to take up a drive against COVID-19 on the lines of the campaign against ‘open defecation’, the Minister said.

Batting for compulsory wearing of face masks, the Minister said it will give protection up to 90 per cent if people wear it especially in public and crowded places. Decision to impose Rs.1,000 fine in urban areas and Rs.500 in rural areas for not wearing masks, was not to harass them but to make them understand the importance of protecting themselves.

On the occasion, Past District Governor (PDG) of Lions Clubs and Commanding Officer of Civil Defence, Government of Karnataka,  Ln. Dr. P.R.S. Chetan handed over the medical equipment to Suttur Seer and Dr. Sudhakar.

Dr. Chetan said in the wake of pandemic, Tata Education and Development Trust decided to donate the materials to JSS Hospital. Today, the entire world is watching India in handling the pandemic. The countries with a population of around 20 crore to 30 crore were finding it difficult to manage the situation. Whereas India with 135 crore population had kept the Corona under check, thanks to number of tests. In Karnataka, 5.31 lakh patients have recovered as against six lakh Corona positive patients and death rate was less than 2 per cent. The Trust is planning to donate ventilators in the coming days, he added.

3 COMMENTS ON THIS POST To “Govt’s COVID-19 bulletin is accurate and transparent: Dr. Sudhakar”