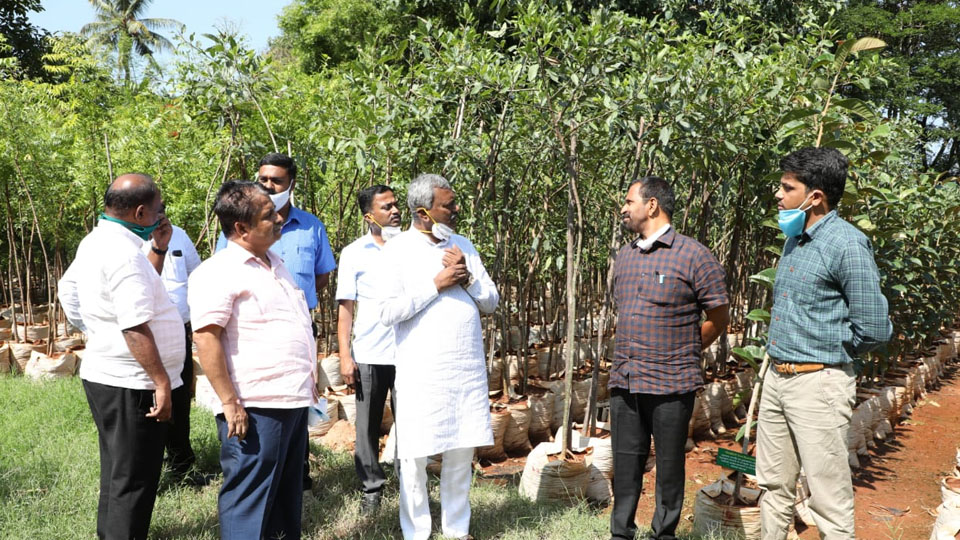 Mysore/Mysuru: District Minister S.T. Somashekar has suggested that the responsibility of planting and caring of saplings in localities should be entrusted to the respective Residents Association, nearest Industries or private organisations.

Chairing a preliminary meeting ahead of World Environment Day (June 5) at ZP Hall here on May 30, Somashekar directed the officials to prepare a list of vacant spaces available in parks and such other public places in all localities of the city, where saplings can be planted.

Reiterating the need for turning the city into a ‘Green Mysuru,’ he said that officials must work towards achieving this goal by planting useful and medicinal saplings in parks,  industrial areas, educational institutions, University premises, Government Office spaces,  Government lands and along roadsides.

Complementing the officials for taking up tree planting drive under MNREGS (Mahatma Gandhi National Rural Employment Guarantee Scheme), with a twin purpose of providing jobs in rural areas and expansion of green cover, Somashekar said that at the same time it is also important that the plants are taken care of.

K.R. MLA S.A. Ramdas said that the Forest Department should come up with data on the number of saplings available with it. Also the Department should advise on the type of species to be planted, whether it is advisable to grow short plants under High Tension power lines and such other issues. Pointing out that we should not remain complacent after planting trees, Ramdas said that it is equally important to take care of the plants till they grow.

Deputy Commissioner Abhiram G. Sankar said that Industries and Corporates  should take responsibility for conserving our eco-system. Industrialists too should voluntarily come forward for maintenance of parks, he added.