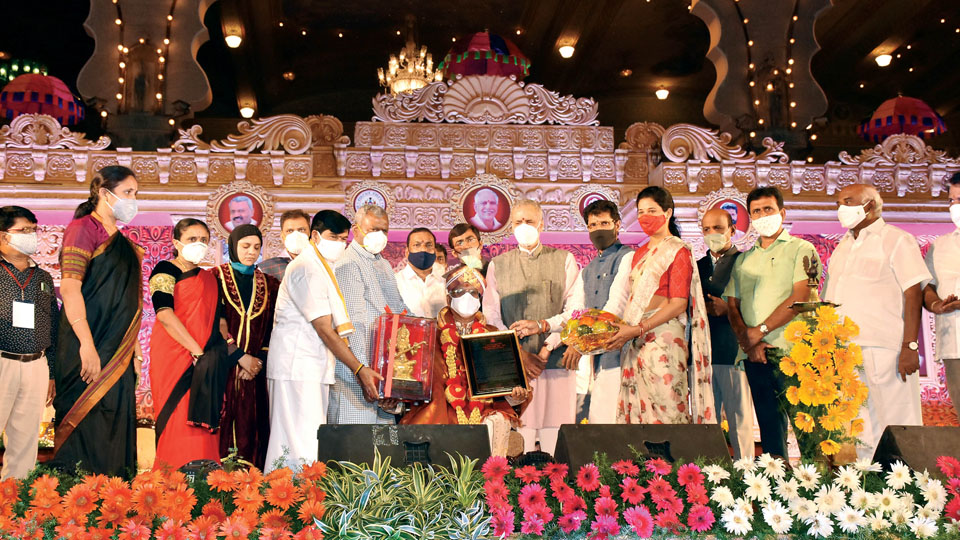 Mysore/Mysuru: The Dasara Cultural programmes held at Mysore Palace premises got off to a colourful start here yesterday. Chief Minister B.S. Yediyurappa opened the event through online from Bengaluru.

A big dais has been put in front of the illuminated Mysore Palace to hold a variety of cultural programmes every evening during Navarathri celebrations. The prestigious ‘Rajya Sangeetha Vidwan’ award was presented to noted Hindustani vocalist Pandit Vinayak Torvi in the glittering function.

Speaking after inaugurating the function, the CM said that the current COVID-19 pandemic has forced the State Government to celebrate this year’s Dasara in a simple manner. The citizens must extend co-operation to the Government by watching livestreaming of all programmes on television and social media platform.

Yediyurappa said that the royal family of Mysore has made rich contribution to the field of arts, literature and culture and this has helped the city to find recognition at international level. Nalwadi Krishnaraja Wadiyar hailed as the ‘Architect of modern Mysore’ encouraged all forms of arts. The culture of Mysuru had reached its peak due to presence of doyens of art and music like Veene Seshanna, Piteelu Chowdiah and others, thanks to the encouragement they received from the Wadiyars. The Kings had made immense contribution to the overall growth of the erstwhile Mysore region due to importance given to art, culture, literature, education, health, irrigation and industries. The presence of artists in the courts of Wadiyars helped the city to get a tag as ‘Cultural City’ in both national and international level.

Responding to the award, Pandit Torvi said except Karnataka, no other State in the country is striving to protect and preserve music, art, culture.

He announced of contributing Rs. 1 lakh to the Chief Minister’s Relief Fund to help the flood victims of North Karnataka, of the total Rs. 5 lakh award money.

He also appealed to the State Government to resume funds being given to Associations and organisations that are involved in promotion of art and culture.

Kageri said: “Dasara festival has a history of four centuries and it was started by Raja Wadiyar in Srirangapatna and continued till Chamarajendra Wadiyar under the royal patronage. Nalwadi Krishnaraja Wadiyar established University of Mysore, K.R. Hospital, KRS and a number of industries that made the province to become model in the entire country. The royal family promoted art and culture. Development was possible if a king always thinks about progress of State.”

Minister Ravi said that the Department of Kannada and Culture has reserved a fund of Rs. 23 crore for protection of heritage and language in the current COVID-19 crisis. While Rs. 15 crore was meant for  promotion of Kannada language, Rs. 8 crore had been earmarked to extend financial assistance to artists, cultural Associations and organisations to hold virtual programmes. The first recipient of ‘Rajya Sangeetha Vidwan’ award was Pandit Puttaraj Gawai way back in 1993.

Later, Shubha Dhananjay and troupe from Bengaluru presented a dance feature on the occasion.

Today (Oct. 18), Vid. Sha-shank Subramanyam and troupe from Hassan will present a Flute Recital from 7 pm to 9 pm.