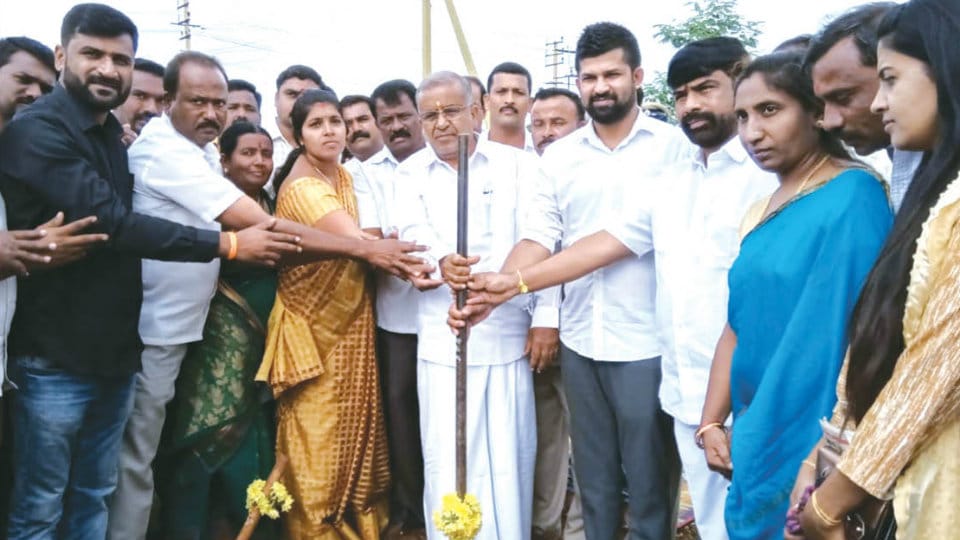 The Minister performed guddali puja for the construction of Rajiv Gandhi Seva Kendra and launched the works for a drinking water unit and underground drainage system in the village.

Later speaking to press persons, GTD, referring to drinking water problems, especially in villages of the taluk, said that Multi-Village Drinking Water Project aimed at drawing water from Kabini will be expedited in six months. Also, the ambitious Undawadi Drinking Water Project will be completed in 18 months and the completion of these two major projects will permanently put an end to the water woes of the taluk villages.

Explaining his efforts to get Government sanction for Undawadi Drinking Water Project for which he had fought for years, he assured that all lakes in the taluk will be filled up from different water sources in a year and there will be no water problem during next summer. He further said that drinking water is being supplied through tankers to such villages which are facing severe drinking water crisis.

Turning to politics, GTD, replying to a question on senior Congress leader Veerappa Moily’s statement that the Congress lost badly because of coalition compulsion said, now that the LS polls are over, no Congress or JD(S) leader should make controversial remarks on the poll results. Stressing on the need to focus only on development, now with the LS battle over, the Minister reminded leaders of both the parties that issuing controversial statements would only hurt the coalition partners and nothing can be gained. Appealing the Congress and JD(S) leaders for better co-ordination, he said that focussing only on development was the need of the hour.

MP Pratap Simha said that there were no fresh expectations for Mysuru from the full-fledged budget to be presented by Union Finance Minister Nirmala Sitharaman, as Prime Minister Narendra Modi has already announced almost everything in the interim budget presented in February.

Highlighting his contribution for the development of Mysuru-Kodagu LS Constituency over the past five years as an MP, Simha said that he will strive for timely execution of all the ongoing projects and would work for bringing more projects to the Constituency.

He thanked the people for re-electing Prime Minister Narendra Modi with a huge mandate and said that Modi will carry forward all his development agenda over the next five years too, with greater determination.

GTD later unveiled Dr. B.R. Ambedkar bust at Maddur village in the taluk. He thereafter left for Nanjangud on a private visit.