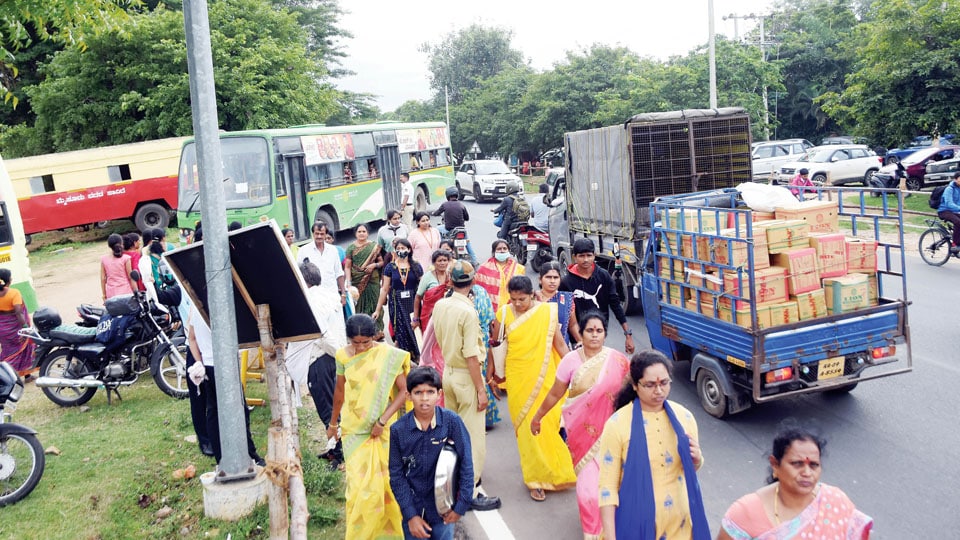 Mysore/Mysuru: Despite a series of meetings headed by the Minister, political leaders and officers to ensure that the devotees coming to Chamundi Hill on Ashada Fridays and Chamundeshwari Vardhanti are not inconvenienced in any way, devotees continue to be troubled and the darshan of Goddess Chamundeshwari is proving to be an arduous task, thanks to lack of better planning.

The District Administration has banned the entry of private vehicles to the Hilltop and has asked KSRTC to provide free bus services (numbering 50) from the grounds at the Chamundi foothill apart from the regular bus service from the City Bus Stand which is not free.

Though the free bus facility is a welcome move, the good gesture is marred by the confusion and chaos created at the temporary parking lot below the Hill.

The bus journey starts near the Lalitha Mahal Palace Hotel at a vacant space on the T. Narasipur Junction,  the epicentre of the chaos.

There are no basic facilities for the devotees here and shoddy arrangements have been made in the name of devotee convenience. Thousands of private vehicles, including buses, cars, tempos, bikes and scooters, are parked in the vicinity and as there is not much space here, vehicles are parked in a haphazard manner.

After the darshan of the Goddess, the devotees are made to alight the KSRTC buses near the busy main road and women, children and the elderly are forced to walk on the road to reach their vehicle parking place risking their lives.

Also, as there is no proper parking place for innumerable vehicles, many of them are parked at will and some of them are parked on both sides of the road that leads to T. Narasipur, its junction, Sri Ganapathy Sachchidananda Ashram School and the nearby park. As the car parking space is not sufficient enough to accommodate many four-wheelers, all of them park on the surrounding narrow roads, clogging them further.

Even the Police are unable to regulate the traffic and parking here and as a result, crossing the road is a risky affair. At the dedicated vehicle parking space, only one drinking water counter has been provided for thousands of devotees.

Over 8 to 10 temporary toilets and one mobile toilet have been provided at the parking lot. The toilets are so dirty that their smell permeates far and wide. Many people dare not approach them and instead, they are spotted relieving themselves behind buses, bike parking gaps and the faraway bushes. It is difficult for women and children to come near the parking space to take out their vehicles as many are urinating in the open.

The entire place becomes a slush field if it rains. The pandals that have been set up by the District Administration for the devotees to take shelter in case of rains are not capable of withstanding heavy showers and wind. As a result, devotees are forced to drench themselves in the rain and board the free buses.

Lalitha Mahal Helipad was an ideal place to park

Even when MLA S.A. Ramdas was the District Minister, private vehicles were banned atop the Chamundi Hill on Ashada Fridays and Chamundeshwari Vardhanti. Parking arrangements and the free KSRTC bus facility were also arranged from the Lalitha Mahal Helipad.

The Helipad is far away from the main road and has a vast space. As such, there was no inconvenience to the devotees who could park their vehicles at the designated place and then get on to the buses to reach the Hill Temple.

Barricades were erected for the movement of devotees to reach the buses so that there is no chaos and confusion. Even the Police could effectively control the crowd.

Some devotees said that the Lalitha Mahal Helipad was a better option to park than the present arrangements.

Sources said that following a Court order, the Helipad land belongs to the member of erstwhile Mysore royal family Pramoda Devi Wadiyar who has reportedly handed over the land to a private company on lease.

Though MLA Ramdas had raised the issue in the preliminary Ashada Friday meeting held under the leadership of Mysuru District Minister S.T. Somashekar, it is not clear if the authorities have contacted the private company requesting it to temporarily hand over the Helipad land for vehicle parking during Ashada Fridays.

If at all the authorities, officers and their leaders had the will there could have been a way to obtain the leased-out land temporarily for the parking facility. This one move could have solved the present mess that has been created by the authorities who lack foresight.