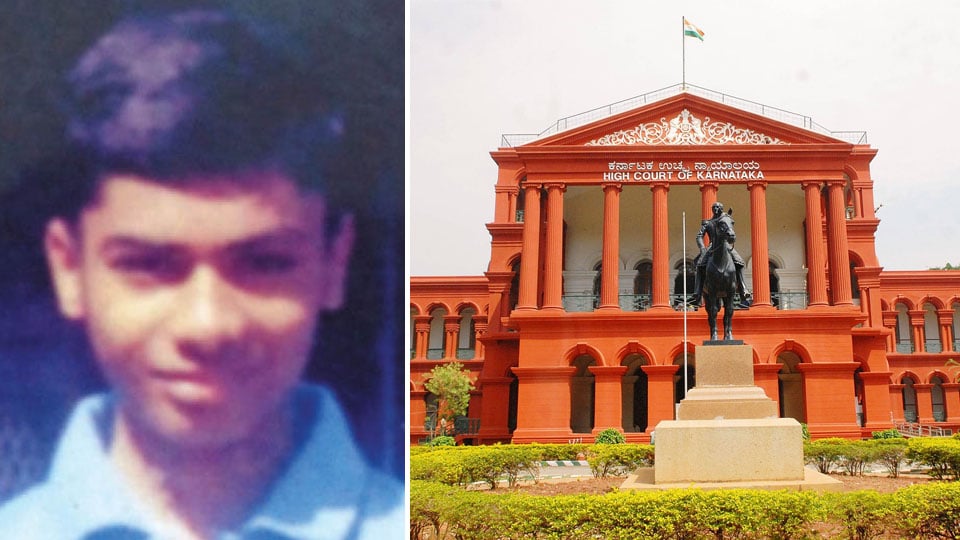 Madikeri: Wing Commander Abhinandan Varthaman’s release from Pakistan’s custody has once again rekindled the hopes of the families of Indian Prisoners of War (POW) who are still languishing in various Pakistan jails. Among the prisoners is P. Yashwanth from Gonikoppal in Kodagu, who has been confined at  Lahore Central Jail.

Yashwanth is the son of Padikal M. Kushalappa and P.K. Meenakshi, who are relentlessly fighting to get their son released from Pak clutches. Now they have moved the Karnataka High Court seeking speedy release of their son.

Taking up the case, the High Court has ordered the Centre to bring Yashwanth before the Court within three weeks. Reacting to this, the advocate representing the Centre claimed that since the relationship between India and Pakistan has stooped to a new low following Balakot bombing, it may not be possible for the Centre to get Yashwanth anytime soon.

Listening to the Centre’s Counsel, Justice Veerappa observed that if Wing Commander Abhinandan Varthaman can be brought back to India within two days why can’t Yashwanth be brought. The Judge then gave two days time to the Centre to bring back Yashwanth.

This was objected by Centre’s Counsel who sought more time as the condition between India and Pakistan was not cordial and it will take time for a prisoner to be released from a hostile nation. Considering this, the Judge granted three weeks time to produce Yashwanth before the Court. Advocate Srinivas Ram argued for Yashwanth’s parents in the Court.

The petitioners said that their son, Yashwanth, who was undergoing training as part of a diploma course in Mysuru, went missing on November 29, 2006 and a complaint was lodged at the K.R. Police Station. However, the Police filed a ‘B Report’ to the local Court after a year stating that they could not find their son. Kushalappa and Meenakshi have been appealing to the State Government and Centre for the release of their son.

“Our son Yashwanth went missing from Mysuru. All attempts to trace him went in vain. When Pakistan released a list of Indians lodged in the Pak jail last year, there was the name of one Ramesh alias Maddur Ramesh in the list. Ramesh resembles Yashwanth as he has a mole on the right side of his throat. He is our son. The Government should make an effort to get him released,” appealed the petitioners.

The petitioner-couple complained that the Union Government has not taken any action to bring their son back despite submitting representations to the Prime Minister’s Office and the Ministry of External Affairs.

Yashwanth had enrolled for a diploma course in Electronics and Communication at Cauvery Polytechnic in Gonikoppal in 2004. However, due to shortage of attendance in the fourth semester, he could not appear for the exams.

Later, he enrolled for a course at Janashikshana Samsthana in Mysuru in 2006. After completing the course in December 2006, he called his parents and asked for Rs.1,000 to go to Bengaluru in search of employment. The couple had given him money in Mysuru, after which there was no trace of him.

In 2014, the Mysuru Police received a photo from the Centre indicating that a person, who identified himself as Ramesh, had completed his jail term after conviction under the Pakistan Foreigners Act. The Pak Government had sent the lists along with photographs to the Indian Government to confirm the nationality. Pakistan had said that Ramesh was arrested in Lahore on Dec.6, 2013. However, he did not possess any arms.

Then, Star of Mysore and its sister publication Mysooru Mithra published the photograph and report on July 11, 2014 about one Ramesh of Maddur being lodged in a Pakistan jail. Seeing the report, Kushalappa and Meenakshi claimed that it was not Ramesh but their son Yashwanth. They contacted the Police when it was discovered that all details made available matched with that of their son, except for the name.

After running from Police Stations to offices of politicians in Karnataka and failing to meet Central Ministers, the distraught parents moved the High Court with a plea to repatriate their son.