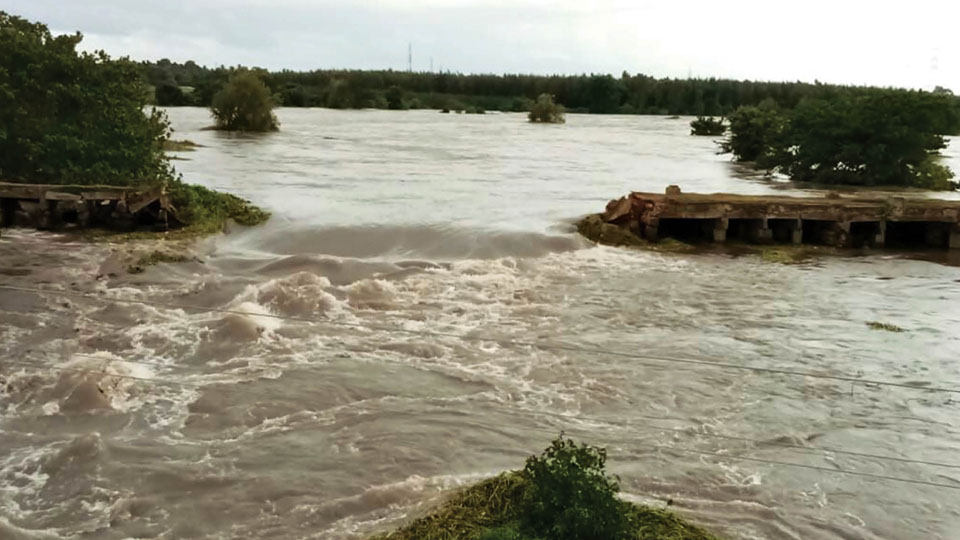 Kollegal: The oldest heritage stone bridge in the erstwhile princely State of Mysore that was constructed in 1818 at Shivanasamudra near Madhyaranga across River Cauvery was washed away yesterday in the gushing floodwaters of River Cauvery.

The 400-metre bridge is called the Wellesley Bridge by the locals. But historical references say that while initially the bridge was named after colonial administrator Lord Richard Colley Wellesley, it was renamed as Lushington Bridge in 1835. Also, this bridge looks similar to Wellesley Bridge at Srirangapatna and it was a place where many movie scenes were shot.

Nearly 40 feet of the structure has been washed away. Though the bridge, located close to Madhyaranga en route to Bharachukki falls, was abandoned and not being put to use, the bridge has  historical importance.

The bridge was considered to be an engineering marvel as it was designed in those days to withstand the force of the river even when it is in spate. The bridge was built with hewn (cut to shape) stone pillars and connected by stone girders and erected on the rocky bed of the stream. The bridge looked arrow-shaped at the end-point. Though two modern bridges were constructed parallel to this bridge, this stone pillar bridge stood unique. 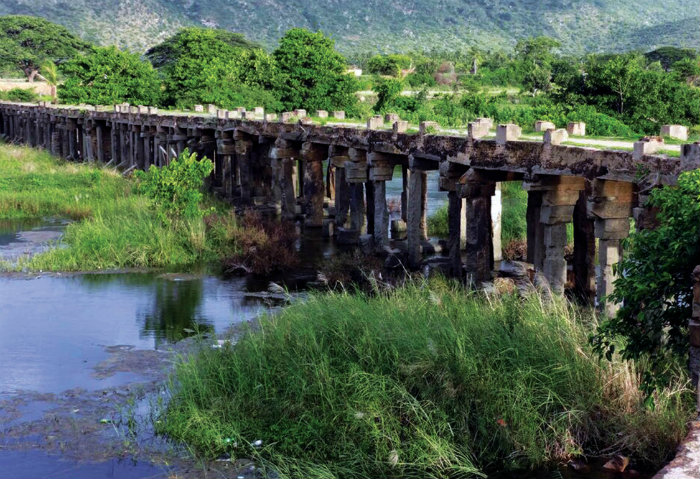 The exact date of construction of the stone pillar bridge is not known. But in 1818, it was repaired by Ramaswamy Mudaliar, an officer under the Mysore administration. A copy of a letter dated July 23, 1833, published in ‘Narrative of a Journey to the Falls of the Cavery’ by Lt. H. Jervis, attributes it to ‘Ramaswami Mudeliar, Jaghirdar of Sivasamoodrum.’ The bridge was named after S.R. Lushington, the then Governor of Madras.

History says that when the British marched to Srirangapatnam (now Srirangapatna) in 1791, Tipu Sultan, drove all the inhabitants and cattle into the island of Shivanasamudra, presenting a silent and desolate country to the British army of Lord Cornwallis. This move was to avoid taxes imposed by the British. Later, the island was overgrown with dense jungle and the old bridge which connected the mainland was badly damaged.

Now with the bridge relegated to history, tourists visiting Bharachukki and Gaganachukki Falls and Madhyaranga temple are robbed off an opportunity to take a heritage walk over the 400-metre-long bridge and   enjoy its beauty.